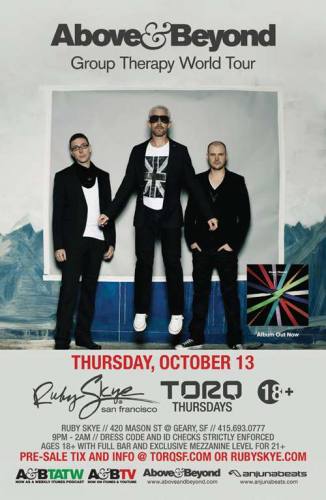 What: Above & Beyond @ Ruby Skye


There are DJs who can rock a party, a club, a festival. And there are acts that can write songs that will bring out the goose bumps in you. But there’s only one group that can do both: Above & Beyond. This three piece have remixed Madonna, won Essential Mix of the Year, and played to one million people in Rio de Janeiro. More importantly they’ve written songs with the power and the melody to en-trance that one million-strong crowd, many of who were singing along, word for word.


Above & Beyond make music, pure and simple. That music happens to be electronic. And it connects. “We’re a group,” says Above & Beyond founder Tony McGuinness. “And what we’re trying to do is exactly do that, connect with people. You try and describe something in your own life, but in a way that will resonate with other people. When you see people singing along as passionately as they do, I guess you’re getting it right.” This makes Above & Beyond unique, not just in trance, but in popular music as well. “We like to think of ourselves as songwriters first,” says Paavo Siljamaki, who with Jono Grant makes up the trio. “That’s our approach to music. The most challenging thing is to write a song that really touches the listener.”


What audiences around the world also respond to is the professionalism and enthusiasm that Above & Beyond bring to their art. There is a warmth about the trio that people love. Tony is the one who gives it all on stage. “Tony is really the rock n’ roll star of the whole crew. He’s the guy with the most experience, in life, in many things,” says Paavo, “and he still manages to be the kid of the group.” Tony sums up his band members with equal enthusiasm. “Jono is ambivalent about the incredible talent he has. He has a lot of energy, he is fearless when he’s DJing and is always in a good mood.” If Jono’s contribution is an effortless musicality, says Tony, Paavo adds heart and soul. “What he brings in a sense is how to bring out the emotion in a track.”


The ongoing Above & Beyond world tour continues. And the band have just returned from Ibiza, where, prolific as ever, they have been recording an Oceanlab album with Justine Suissa that is even more widescreen in its vision, says Jono, than ‘Tri-State’. They work instinctively as a team, constantly striving to get better. “You get more out of life by collaborating,” notes Tony. “We’re always trying to grow, we’re always trying to learn and we’re always trying to get better at what we do.” And what they do is make music with melody, movement – and meaning. Music, in short, that matters to people across the globe. “You can do stuff that is popular without selling out,” says Jono. “If you do something of good quality, people respond to that.” Which is why even when they are half a world away, audiences always make Above & Beyond feel at home.