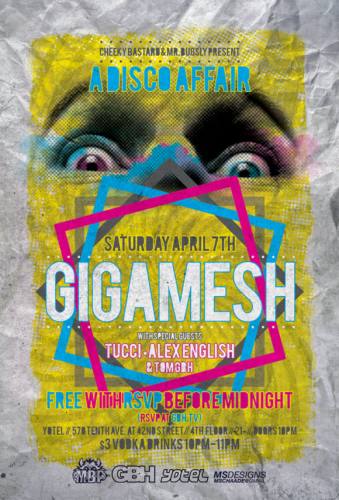 RSVP (To Get In FREE B4 12): http://gbhtv.com/Signupyotelgigamesh.html

M.B.P decided that for our birthday this year, we really wanted to give back to the community that allows us to thrive. So we are throwing a ballin' ass disco affair at Yotel with the one, the only, Gigamesh! Best of all? It's FREE till Midnight when you RSVP! Oh and did we mention Vodka drinks are only $3 from 10-11 as well? This is gonna be one for the books ladies and gents! See ya there :)

PS- Dress to impress, this place is SWANKY!

Gigamesh is the stage name of Matt Masurka, an American multi-platinum selling music producer and DJ. Most recognized for his remix work, he has experienced a swiftly building reputation as one of the most versatile and consistent names in indie-dance music.

Hailing from Minneapolis, Minnesota (a.k.a. Prince’s hometown and the city that inspired Funkytown), it is no surprise Gigamesh has developed a keen taste for disco and 80′s electro-boogie. The sound is immediately recognizable in much of his music, however he maintains a flexible aesthetic. Gigamesh considers himself an ardent fan of minimalist concert music, jazz, disco, film music, classic rock, and genre-bending electronic artists of all kinds. These elements have all combined to forge his all-inclusive approach to music appreciation and creation.

One of Gigamesh’s more notable accomplishments was his fortuitous leap into the pop music world when he remixed a song for Mike Posner which had hitherto only been released on a mixtape. A radio-length version of the remix ultimately became the lead single on Posner’s 2010 debut album, sold over two million copies and launched Posner’s career as a pop star. Gigamesh has subsequently continued to achieve hit after hit, attracting commissioned remixes for acts including Foster The People, Grouplove, Katy B, and Theophilus London.

In October 2011, Gigamesh released his debut self-titled EP on Our Label International, which receieved wide acclaim in the disco and indie-dance community. In early 2012, Gigamesh began to develop a close relationship with French record label Kitsuné, which resulted in them inviting him to perform on several dates of their highly-anticipated U.S. Club Night tour.

Tucci is a lifelong musician and relatively recent club convert who from the comforts of the suburbs once claimed he would never be a city person. Times change. Getting hooked on dance music and starting to DJ brought him closer and closer to New York City until moving in was the only option. Since arriving in Brooklyn in 2008, he's made a habit out of spending his weekends deep in the NYC club and underground party scene, collecting stylistic ammunition. Different nights would reinforce different elements of the music that makes Tucci tick; the 80's drums and basslines of Chicago & Detroit, brain-tingling touches of acid house, the warmth and heart of disco and the modest restraint of minimal techno. A "play anywhere, anytime" mentality has seen Tucci blurring genre lines for appreciative crowds at underground parties, music festivals, clubs, backyards, basements, and dorm rooms across 7 states. He is constantly delivering relevant, gripping house and techno music with sincerity and class. Recently, his most notable appearances include Dj sets at the Music Hall of Williamsburg, Highline Ballroom, Sullivan Room, Public Assembly, Brooklyn Bowl, and a special early-morning appearance in the "Silent Disco" at the Camp Bisco 9 music festival. With 2011 upon us, Tucci expects to further himself as a producer, deliver his first release, and throw a few parties of his own.

As co-creator and weekly resident DJ of Girls & Boys, Webster Hall’s acclaimed Friday party, Alex English has shared the stage with some of the biggest names in the DJ world. In the past year alone, Girls & Boys has played host to Xavier de Rosnay, A-Trak, Boys Noize, Crookers, Steve Aoki, The Bloody Beetroots, MSTRKRFT, Deadmau5 and Chromeo, among others.

With over 20 years of DJ experience under his belt, Alex English has become a fixture in the electro scene in New York City. Apart from his residencies at Thom Bar on Thursdays, Webster Hall on Fridays, and the Tribeca Grand Hotel on Saturdays, Alex also deals with booking the all-star DJ line-up for GBH parties at Webster Hall, Tribeca Grand, and North 8th in Williamsburg.