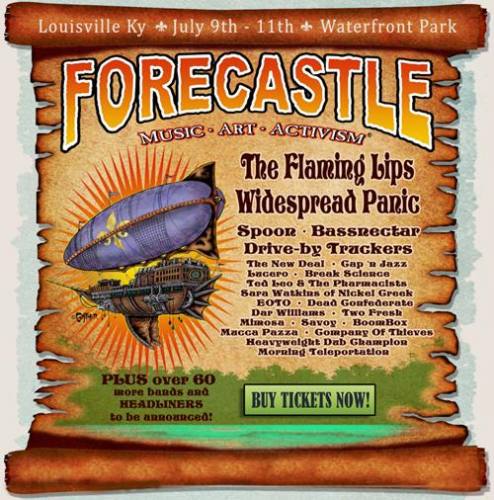 The Forecastle Festival is where the Midwest connects®. Founded in Louisville, KY, the annual gathering is equal parts Music, Art, and Activism. A symposium for musicians, artists, and environmentalists, Forecastle connects the progressive Midwest. The 2010 fest is expected to draw over 25,000 patrons to the Louisville Waterfront ~ part of a scenic, $60 million dollar riverfront investment which attracts 1.5 million visitors a year. With national headliners and expanded line-ups, the festival will provide an unforgettable experience for all Forecastle travelers, converging in Louisville from the Midwest and beyond.
The initial lineup for the 9th annual Forecastle Festival has been announced:
The Flaming Lips
Widespread Panic
Spoon
Bassnectar
Drive-by Truckers
The New Deal
Lucero
Cap ‘n Jazz (reunion)
Ted Leo and the Pharmacists
EOTO
Break Science
Sara Watkins of Nickel Creek
Dead Confederate
Dar Williams
Mucca Pazza
BoomBox
Mimosa
Savoy
Two Fresh
Company Of Thieves
Morning Teleportation
More headliners and over (60) artists to be announced in April. Stay tuned…