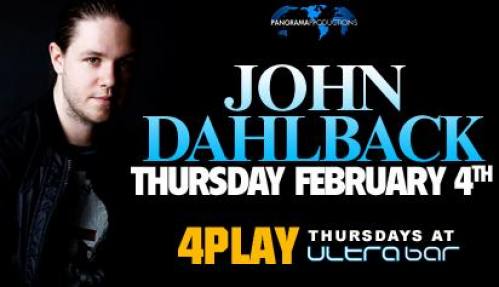 Panorama Productions presents
4PLAY – Washington D.C. – www.ClubGlow.com
Thursdays at Ultrabar
Thursday February 4th 2010
JOHN DAHLBACK - Stockholm Sweden
(myspace.com/huggotron)
Opening set by
RICH WEBB
(GLOW-DC)
John Dahlbäck is further testament to the theory that when it comes to overly talented musical homelands, there could indeed be something in Sweden’s water. Born in 1985 in a small village near Stockholm, he landed his first record deal aged just 15 while most of his peers were just discovering clubs. Now 22, he’s already the proud owner of a label, has a string of well-known productions to his name and a reputation for quietly turning out some of the best house melodies you could hope to hear.
With a family background boasting more music than the Von Trapps it’s no surprise he was instantly hooked – his mum sings in a jazz band, his dad drummed in a prog rock band, and various aunts and uncles played piano, guitar and more, so he was hardly stuck for inspiration or opinions to help him get started. Learning the basics on his dad’s Atari computer he soon established his own style, and his second demo, a jazz-influenced, deep house number called Night Flash, earned him a record deal with Route 33. His next 12”, Music So Sweet, found a home on Deep4Life, but with the releases coming thick and fast John decided to set up his first label with his cousin, Jesper. The pair found acclaim as Hugg & Pepp, and John’s productions established him as a name to be reckoned with. Starting a new label, Pickadoll, for the Plantage 13 label management in 2005, John finally had his own imprint. Proving he had an eye for signing, the label was soon releasing as prolifically as he was, with artists like Özgur Can, Sebastien Leger, Dada Life, Zoo
Brazil, Robbie Rivera, Laidback Luke and Style of Eye putting out tracks through Pickadoll.
“I had a real vision about the label,” says John. “I can hear within a couple of seconds whether a track will fit, and I love doing this kind of organised work – sending out promos and looking for licenses – otherwise I’m just a slave to the studio!” On top of the label and his productions, John holds a residency in Sweden and plays out all over the world. Europe is one of his favourite places, especially France, and a summer in Ibiza has lightened John’s production style from minimal techno influences to his more house-influenced vibe. “It was so good to listen to sun-drenched tunes, the grooves and harmonies just feel stronger to me.“
A new album, Winners And Fools, is out in September 2008, and is described by John as “the one I’m most proud of. I’ve done a lot in the past and there have been some amazing moments. When Blink started to get big in France and I was making the video it was a huge moment, but everytime I do a track now I feel I’m improving. Making Winners And Fools I felt like it didn’t have to sound like anyone expected – it could be exactly what I wanted. I’ve always done quite dark albums in the past and this is really uplifting, with nice summer vibes and good vocal tracks.” His prolific nature continues to rule – a 5 week tour of France will be followed by work on another album, scheduled for release in summer 2009. For John, his agenda for making and playing music is simple. “I’m quite calm when I DJ, I don’t want to be ‘showy’ - I love to play for dancing people, to really see them loving the tunes. And I love to make the tunes that get them dancing…”
4Play happens Thursdays at Ultrabar – 18+
911 F St. NW Washington D.C.
Tickets & Info: www.clubglow.com Direct: 202.271.1171
Facebook: Glow Fan Page & “I Love Glow” Group // Myspace.com/clubglowdc
Twitter – ClubGlow // Blog: www.clubglow.com/blog
BECOME A “FAN OF GLOW” ON FACEBOOK AND GET THE BEST DISCOUNTS TO ALL GLOW AND 4PLAY EVENTS!!!
-Main Floor (House Progressive)
-Bedroom (Hip Hop, R&B, Mashups)
-Chroma (Reggae, Hip Hop)
- Basement (Hip Hop, Top40)