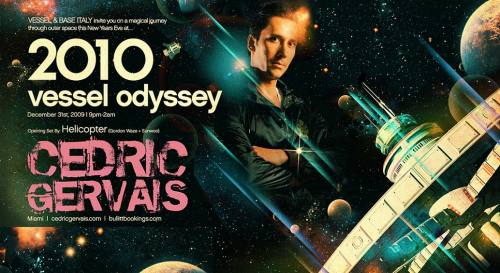 2O1O: Vessel Odyssey feat.
Cedric Gervais (Space, Miami) +
Helicopter (Gordon Waze + Sunwoo)
This New Year's Eve jump on the space Vessel, Destination: 2010. We’ll be your guides on a tour of the universe as you embark into the New Year! Get ready for a meaningful, intimate, memorable, tasteful & luxorious new years experience this year. Decadent decor will fill the venue as you kick off a stylish night, dancing to world class DJ Cedric Gervais on our Funktion One sound system and experiencing special surprises around every corner. We are offering an OPEN BAR admission special! See you on our intergalactic dancefloor!
More info on Cedric Gervais:
It is an uncommon occurrence in the Electronic Dance Music scene to find an artist sensationally talented as both a DJ and a producer. Cedric Gervais is of the rare breed whose talents behind the decks translate over into the production room. For years he has captivated clubbers and partygoers as he reigned supreme over the Miami dance scene.
Although originally born in Marseilles, Cedric Gervais has chosen Miami as his adopted home, and the city has been more than happy to embrace him. He has held residencies at Crobar (now Cameo) and the world famous Nikki Beach, before taking over the Space Terrace.
Cedric’s presence at the Space Terrace was felt immediately as people in the thousands began lining up to witness him devastate the after-hours scene. Despite being in such heavy demand, Cedric still found time to take his talents into the studio. He also spent the next couple of years touring the world, entertaining and thrilling his many fans.
His production credits include working with the likes of Lenny Kravitz, Deep Dish, Steve Lawler, and Rachel Star, just to name a few. Although it would be cliché to say the future is bright for this young star, it is nevertheless true. No one can be sure what is in store for Cedric, but what can be certain is his impact will be one that will be felt for generations to come.