On the second day of What The Festival in Dufur, Oregon, I was granted the opportunity to take pictures while suspended atop a massive cherry picker. To my left, I stared across miles of open plains and watched blissful campers flooding towards the venue. To my right, I gazed in awe at the snow-covered peaks of Mt. Hood, ominously peering above the Effin Stage and OMG Lounge. Directly behind me, I glanced at Mt. Rainier’s distant backside, completely visible regardless of its location in Washington. 60 feet below me, I watched hundreds of screaming concertgoers dance around in a splash pool as Machinedrum played yet another fabulous set. While attempting to pick my jaw up from the floor and still capture an abundance of photos, I realized something: this place might just be Heaven.

The burgeoning festival combines luscious surroundings with a riveting collection of artists, creating unforgettable ambiances wherever you end up exploring. Whether it’s four in the afternoon or four in the morning, there’s always something worth checking out. If you seek peace and mediation, there’s a place for that. If you’ve been dying to learn the art of breakdancing, capoeira, or even parkour, there’s a place for that. If you simply want to hear booming music pummel through Funktion-One speakers, then there’s about five places for that. Regardless of your desires, What The Festival has you covered.

Kastle (June 26th): At around eight on the first night, things started getting real memorable. Following jaw-dropping performances from Chrome Wolves, Odesza, and The Polish Ambassador, the audience was treated to an ethereal live show from Kastle (Barrett Richards). The recent LA transplant blessed the effervescent crowd with a thrilling set from start to finish, consistently dabbling in his own collection while shifting between original and remixed material. This included Kastle’s recent revamp of “My Blood,” along with an unreleased take on Ellie Goulding’s “Tessellate” cover that he unveiled for the first time. On the original front, Richards busted out countless tracks from his eponymous debut including “Circles,” “Death From Above,” and “Red Light,” along with classic tunes from previous releases like “Stay Forever.”

XXYYXX (July 26th): After A-Trak dosed the audience with endless bass on the WTF stage, the spotlight was turned over to XXYYXX (Marcel Everett). The teenage producer performed well beyond his years, sportin’ a full beard that was topped only my Machinedrum’s ubiquitous mustache. More importantly, he was reppin’ a collared shirt with JFK’s face plastered all across it. Dope to say the least. On the music front, Everett wasted no time getting creative and continually taking big risks. This included his ever-changing selection of music, along with an ongoing desire to push the boundaries throughout each song. When accidentally cutting the sound out while performing a difficult section of his set, he casually smiled and stated “Let’s try that one again.” This push for perfection helped win the crowd over, along with touching original tunes including “Breeze,” “Set It Off,” and “Even Though, along with a quick rendition of “Take My Breath Away” to end his set.

Kill Paris (July 27th): What The Festival’s second day was consistently packed with talent from twelve in the afternoon to 7:00 AM the next morning. Nineteen hours of madness, ranging from Tycho and El Ten Eleven to Gramatik and Medium Troy. One of the most energetic and tantalizing sets of the night was graciously handed down by Kill Paris (Corey Baker). The Los Angeles based producer summoned his deep inner love for sensual R&B, leaving the crowd spellbound as they sung along to classic samples from “Baby Come Back,” “I Do Love You,” and “ I Wanna Be Your Lover.” Baker also dropped bewitching remixes of MONSTA, Rudimental, and The Great Flood Catastrophe, along with multiple tracks from fellow OWSLA artists like Skrillex and Dillon Francis.

Purity Ring (July 28th): Every festival needs a little Purity Ring (Megan James & Corin Roddick). Whether it’s a predominately electronic or fully indie fetival, you’ve got to dash some Purity Ring somewhere in there. The Canadian duo tamed the audience’s mood with James’ dainty vocals and Roddick’s stunning instrumentations, showcasing their unique style of performance that includes breathtaking lights, various sample pads, and riveting percussions. The two musicians coalesced their specific talents while performing alluring tunes from their debut album, including “Crawlerstout,” “Lofticries,” “Obedear,” and “Grandloves,” along with their more recent cover of “Grammy.” When announcing they would be playing their rendition of Soulja Boy, the crowd went a bit silent. James followed this by confusingly stating “Do you not know who Soulja Boy is?”

Cyril Hahn (June 28th): As the final night of What The Festival dwindled down, there was just one thing left to do: let the enticingly deep sounds of Cyril Hahn take you away. Nuzzled neatly in between J. Philip and Claude Vonstroke’s bass-laden sets, the Swiss producer uplifted the audience with melodic soundscapes across a broad spectrum of sonic palates. This included numerous tracks from his evergrowing collection of remixes, including fresh takes on Gabrielle Aplin, Jesse Ware, Solange, Mariah Carey, and Destiny’s Child. The crowd ate these up like the chocolate covered bacon available for purchase at Sammitch’s Food Truck, singing along to “Say My Name” like it was 1999. Hahn also switched gears at times and played disco tracks like “Only You Can Show Me” by Goldroom, before closing things out with a saccharine arrangement of his recently released original track “Perfect Form.” 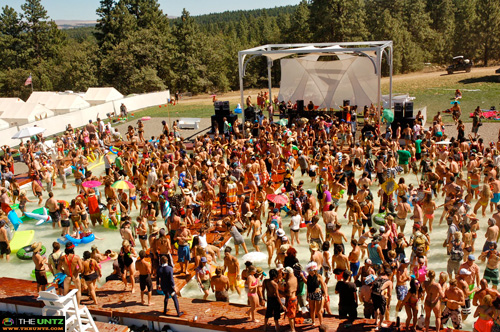 For three straight days at What The Festival, there was a pool party. This pool party took place for about six hours each day, and was the perfect spot to accumulate a little midday buzz. Conveniently located next to the venue’s primary bar, there were two massive splash pools connected in every direction with wooden platforms. There was dancing, loosely dressed lifeguards, inflatables, and plenty of good music. American Girls, DJ Shawna, Tyler Tastemaker, Machinedrum, and An-ten-nae held down the fort on Friday and Saturday, while Sunday’s event was taken over by Decibel from 2:00 to 6:30. The crowd was immersed into a state of non-stop disco by Kid SMPL, J Alvarez, Nordic Soul, and Classixx, aptly preparing attendees for another late night.

-Watching the sunset at Wolf Run Ranch.
-A huge dinosaur named King Dazbog walking through the festival.
-The Polish Ambassador bringing out Ayla Nero to perform Wildlight tracks.
-Surviving through a dust storm for three straight days.
-The splash pool lifeguards pulling a Caddyshack-esque prank and throwing candy bars in the pool. Oh yea, then they ate the chocolate.

-Eating at Koi Fusion, Athena’s, Bunk Sandwiches, and Skyline Grill.
-Machinedrum playing a surprise set at the pool.
-RJD2 missing his flight and set, but still performing at 3:00 AM in the OMG lounge.
-Random Rab playing a sunrise set from 5:30 to 7:00 at the Opulent Temple.
-The Fungineers performing “It’s Bigger Than Dick Sock” at The LOL Stage. You can imagine what they were wearing.

What The Festival has come and gone, but the memories won’t soon fade. Everyone was willing to lend a helping hand, the vibes were always strong, and good music just never stopped. The event continues to establish itself as the Northwest’s most innovative electronic weekend, building off their inaugural edition to create a festival that is centered around those in attendance. If you’re willing to spend a bit more money, you can purchase an hour-long massage, sleep in a bed, and enjoy an exclusive lounge. Or, you can pay the base fee, camp in the woods, and still have the time of your life. The possibilities are endless.