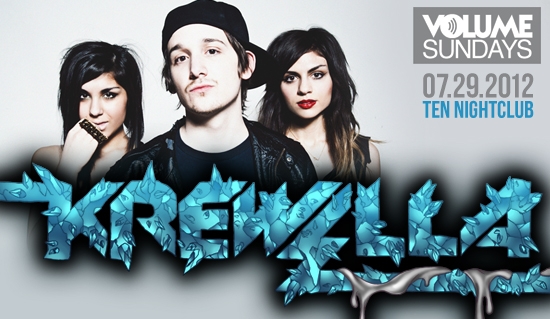 July 29th marked the fifth installment of Ten Nightclub’s illustrious Volume Sundays series, and it just may have been the best one yet. The club has been proving to the entire Orange County scene that they are here to not only bring fans a night of thunderous electronic music, but provide audiences with some of the most talked about producers in America’s current bass movement. The combination of a hard working crew, jaw-dropping LED screens, and an adrenaline pumping sound system has helped them get to the place they are today, and the club shows no signs of letting up.

The audience patiently awaited the return of Krewella to the decks of Ten Nightclub, who quickly proved they deserved another chance to rock the venue. The Chicago trio of ambitious young guns have been making a name for themselves at a remarkable pace this past year, and doing it with a unique style of pop infused electronic music that is extremely catchy and undeniably heavy. Kris Trindl (Rain Man) creates the group’s pulsating instrumentations, while sisters Jahan and Yasmine Yousaf provide that extra layering of party rockin’ lyrics and soul gripping vocals. The result: immersive bangers in genres all across the board that will have any listener dreaming of a night out on the town. This can be experienced on their breakout EP Play Hard, which features groundbreaking cuts mature beyond the threesome’s years.

Krewella started things off by dropping the title track from their debut EP, and never looked back. The trio than weaved in some revamped versions of well-known radio hits between their own songs like “Strobelights” “Rise & Fall (Remix),” and “Fire Hive (Remix),” and the dance floor responded by going all out during each cut. Every member of the crowd was singing along and going wild, which included California bass legends 12th Planet and Flinch. Krewella honored their attendance by dropping some tenacious tracks from the two producers, and seemed incredibly honored to have the opportunity to perform in front of them. They also unleashed some cutting edge anthems from Jakob Liedholm, RL Grime & Salva, Dirtyphonics, Zomboy, Skrillex, Milo & Otis, and Netsky, which fit perfectly amongst tumultuous tunes from Play Hard like “Alive” and “Feel Me.”


They came, they conquered, and they partied just as hard as the audience. Krewella went all out on their Sunday night set at Ten Nightclub, and showed Orange County that when it comes to playing hard, there is nobody who does it like them.