Last week, LA-area hip-hop heads and EDM aficionados were treated to a stimulating musical encounter, compliments of the multi-dimensional, robust 7-piece group of endowed music makers and MC’s bursting at the seams. 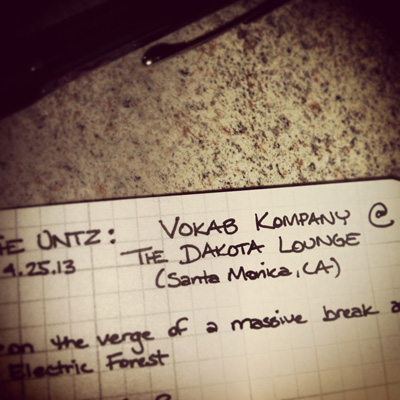 Vokab Kompany was in full effect at the Dakota Lounge in Santa Monica, CA before a thick summer schedule, including their first trip to Electric Forest Festival and a return to Lightning In A Bottle, among other stops.

The Untz caught up with Rob Hurt and Matt Burke, the two rhyme-spitting, lip-smacking, front row spraying MCs of Vokab Kompany for a glimpse into what’s on the horizon, how their creative process unfolds, and the future of live music.

“Michigan will be cool, no doubt. Can’t wait to rock it!  Also stoked to get back to Lighting In A Bottle.  We’ve been there the last 6 years and it’s our home festival.  It’s great to support it, and to be supported by the LIB family at the same time, in return”, says Burke.

“We’re like brothers”, says Hurt, when asked about their inspirations.  “We grew up down the road from each other in San Diego, always feeding off of each other, whether it was music, life, whatever the case.”

Burke adds, “This guy’s the godfather to my son. We’re family.  We inspire each other, which inspires our music all the time.”

Heading out this summer, the guys are most excited to play for new crowds, and share music with fans and loyal supporters, as well as getting back together with their homies.

“Love and Light are great friends of ours. We’ve played fests with them a lot, like Shambhala (Festival) and we’re stoked to get back up with them. They’ve been real good to us over the years and it’s always nice to get up when we can.” 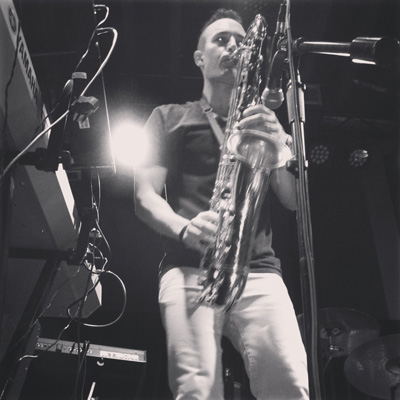 Discussing the future of live music with Hurt, he notes “digital is finally catching up, but there’s nothing that can replace the live concert experience.  Our shows are never the same,” he says, “and festivals are where it’s at right now, both for artists and fans.”

The unassuming, confident liveliness Vokab Kompany evokes was extraordinary to witness.  They pumped out an arsenal of genre-bending jams and riddled the crowd with their relevant, intelligent rhymes for over an hour.  It was evident that these guys were in the house for one reason - to move the bodies on the dance floor.

Make sure you check out their latest album (co-produced with Crush Effect), VKCE, and catch Vokab Kompany as they make their way to your city.  The keys, the synths… the sax, and electronic violinist… don’t just take my word for it.  Do yourselves a favor, go see Vokab Kompany live and in the flesh. And move your bodies to the music.