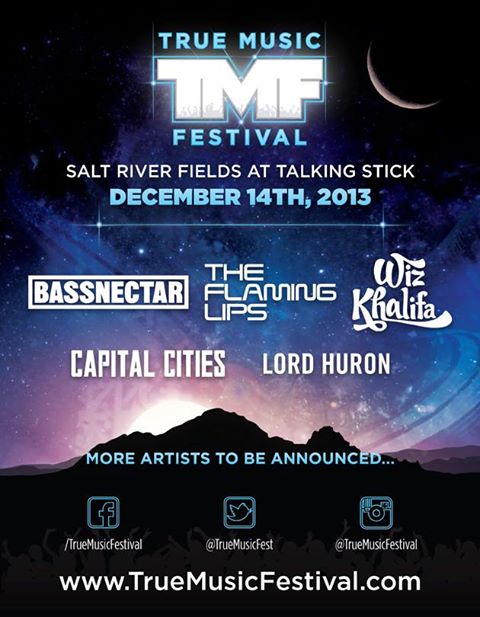 True Music Festival, a brand new festival experience coming to Scottsdale, Arizona, has revealed its first round of performers for the inaugural event, which will be held at Salt River Fields at Talking Stick on December 14, 2013. The performer lineup at the multi-genre festival includes: wildly engaging EDM producer and DJ, Bassnectar; rock stalwarts, The Flaming Lips; hip-hop impresario, Wiz Khalifa; the indie-pop duo, Capital Cities; and indie-folk band, Lord Huron. More artists will be announced in the coming weeks, building off of these and other genres. In addition to a day of performances featuring a range of musicians, from nationally recognized artists to local favorites, the festival will also include a wide array of vendors, art installations, roving performers and more.

The multi-stage festival, which is a first for the area, will be held at the Salt River Fields at Talking Stick. Centrally located between Phoenix and neighboring Arizona State University, the venue is a part of a new 140-acre state-of-the-art complex, which serves as the spring training home of the Arizona Diamondbacks and Colorado Rockies. Uniquely positioned on the Salt River Pima-Maricopa Indian Community, it is one of the most desirable geographic regions of the entire metropolitan Phoenix area.

A limited allotment of pre-sale tickets are on sale now for $60, before moving to $70 for General Admission. Tickets will be available online at www.truemusicfestival.com/tickets and at the gate, but are subject to availability. VIP packages will be available starting at $130. Details about VIP and travel packages to be announced in the coming weeks.