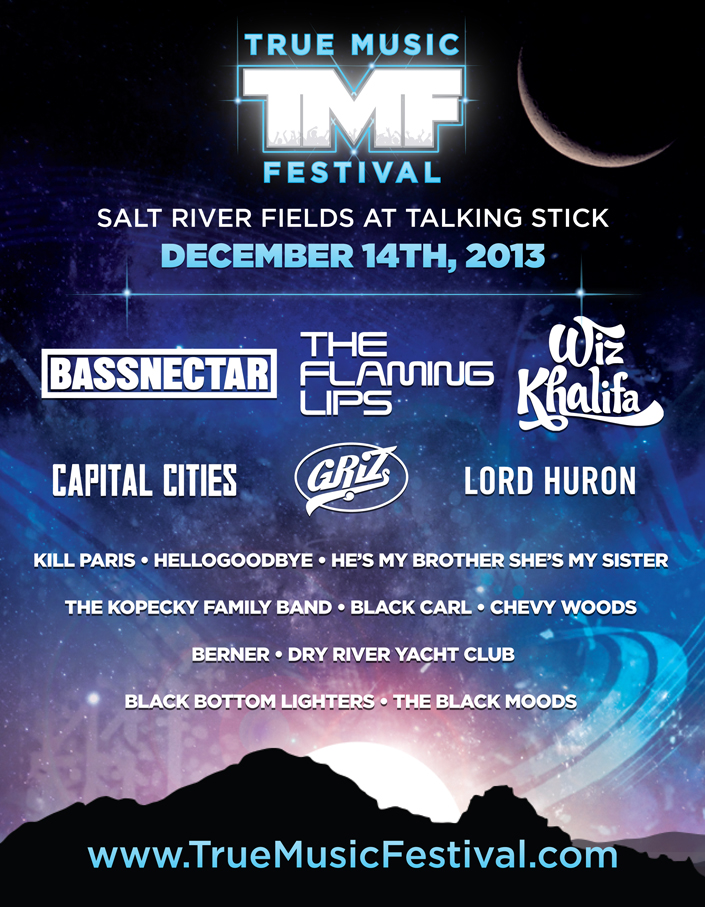 Diversity is the watchword of the inaugural True Music Festival, taking place December 14th in Scottsdale, AZ. The stacked lineup puts subsonic superstar Bassnectar at the top of a wildly inventive lineup that features The Flaming Lips, Wiz Khalifa, Lord Huron, Capital Cities, as well as solid mid-sized players and a thick assortment of local and regional acts.

The big bad bass man Lorin Ashton is having a banner year, which includes a three-peat NYE appearance in Nashville,  a BassLights reunion in Denver, and now, the southwest gets to enjoy the sights and sounds of one of the biggest and most popular touring acts in all of the growing EDM scene.

Joining Ashton is Grant Kwicienski, one of the fastest rising stars we've ever seen. GRiZ burst out of anonymity with his smash hit Mad Liberation, and just last month followed it up with another incredibly powerful pack of tunes, Rebel Era. The tour in support has been nothing short of exhilhirating, and the youngster shows no signs of slowing down.

Joining these massive names is another youngster, Kill Paris, who has swept Soundcloud off its feet with remix after remix of funky tunes that blur the lines between booty-shaking and head-banging music. The star-studded lineup at True Music Festival bears no shortage in electronic music, and to follow suit with its name, the numbers of indie, hip-hop, and rock acts makes the night of music all that more special. Check out the full lineup.

Tickets for this inaugural event come in four different flavors: GA, Premium, VIP, and TRUE VIP. With prices ranging from $80.75 to $1500, there's a level to meet every budget and every set of needs. From premium seating sections, to expedited parking, escorts into the festival, full-service bars and concessions, to cocktail waiters, and private security guards, the upper level passes get fans a lot more bang for their buck. Imagine sitting in a two-story private viewing box, and then deciding you want to sit within 10 yards of Bassnectar. TRUE can make your dreams come... well... you get it.

For the longest time, southern Arizona has been a barren, festival-free part of the country, but this year, True Music Festival is putting an end to the drought. Come join us in Scottsdale in a little over a month, and bask in the glories of True Music Festival. It's all about the music.