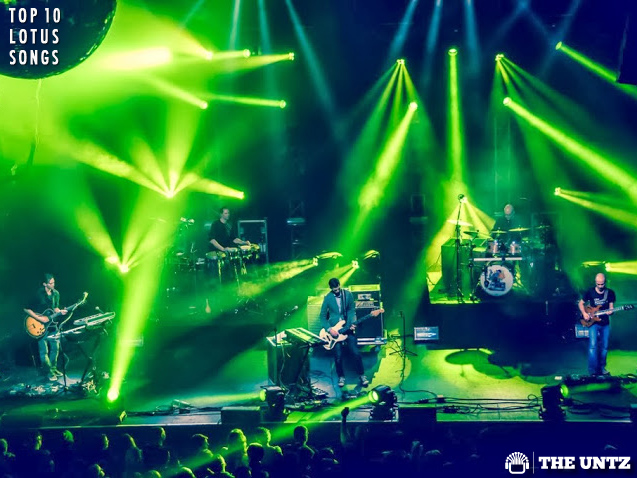 What is Lotus? Is it post-rock? Is it jazz fusion? Is it jamtronica?

The band's music, like seemingly every sort of popular act in the industry these days, continues to defy categorization. Each song, and specifically, each intangible, ephemeral incarnation each song takes in the live setting shape shifts into its own fleeting occurrence, to be captured only by tapers and locked into the memories of fans.

I don't just hold a special place in my heart for Lotus because they, like me, have an origin story based in Indiana, though I do have a special fondness for those midwest shows, especially their annual Summerdance at Nelson Ledges up in northeast Ohio. What I love about them is the same thing that the entire staff at The Untz loves about 'em. They were one of those original acts that brought us out of the jam world into the light of electronica through late night throwdowns and experimental improv that sent us into a tailspin.

The band is celebrating its fifteenth year, as well as the tenth anniversary of the studio album, Nomad, which the band recently played in its entirety at Mr. Smalls just outside Pittsburgh, the very spot it was recorded a decade ago. Lotus will re-release the album on vinyl, as well as the live recording of that Smalls show, on December 16th via Harmonized Records.

In honor of the reissue, we enlisted our fans to help us countdown the top ten tracks from their whole catalog. The songs come in from across the band's entire repertoire, and many of them are favorites from the live shows, where they become an entirely new animal. Don't worry about "what it is," just dive in.

The wordless "Flower Sermon" of the Buddha is noted as the origin of Zen. Without speaking a word, he was able to convey his disciple exactly what he meant. Lotus, without words, is able to convey so much with its instrumental pieces. None more than this one.

And then suddenly there were vocals. Whoa! "Age of Inexperience" is a rockin' tune, and like most of their rockin' tunes, is the perfect vehicle for Mike Rempel to absolutely shred. One of the meanest ax-wielders in the game. Delightful licks on this one.

The band demonstrates its jammier roots with this one. Light, happy melodies collide in a swirl of those good feels. While the hairstyles may have changed, this remains a favorite when it pops up in sets. Try listening without smiling.