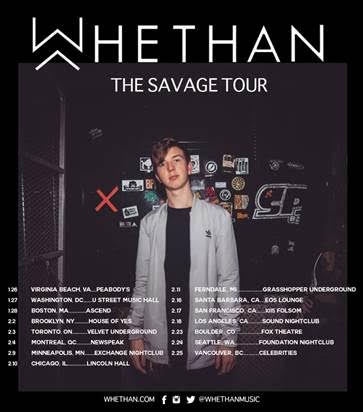 Uplifting, heartwarming and even pulsating, “Savage” delivers to an audience looking for a mix of bass and pop. Featuring the English king of dubstep, Flux Pavilion and American actor, model and singer, MAX, “Savage” embodies the fiercest synthesized melodies building every time the unmistakable bass drops. This song will bind you to the dance floor and force you to surrender to Whethan’s unique sound.

Whethan, a Chicago native, incorporates a brilliant mix of drum and bass and electropop in his songs. If you enjoy the sounds of Flux Pavilion and Flume, you will not be able to get enough of Whethan. Some of his notable hits include the widely favored ZAYN’s “Pillowtalk” and Louis the Child’s, “It’s Strange.” Hell we tapped him as putting out the hottest future bass song of 2015 back when he was still ‘Wheathin.’ Pay close attention to this rising DJ this upcoming winter as he travels across the United States to headline his own tour in fifteen different cities.

Did I mention he’s only 17 years old?