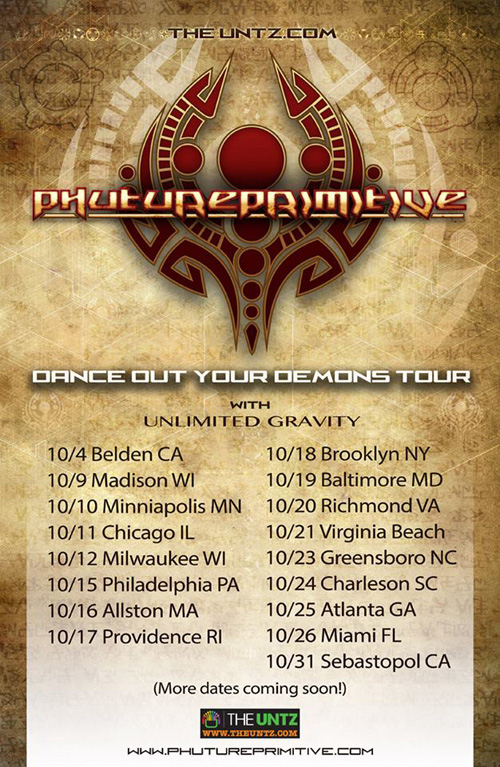 On the heels of yesterday's announcement that TheUntz.com will be presenting Conspirator's Going Up fall 2013 tour, we're revealing today that The Untz is joining forces with one our best friends in the biz, Phutureprimitive, to present his Dance Out Your Demons Tour with Unlimited Gravity!

Rain has had a monster 2013 year, so far. The Untz got involved with his monthlong April tour with ill-esha, which led to the release of the first part of his double-album Searching for Beauty in the Darkest Places. The second installment of the album is due out this fall, and PhutureP will be hitting the road through the midwest, northeast, and southeast to celebrate the release.

Joining Phutureprimitive on this October sojourn across the country is Ronnie Weberg. Just yesterday, 1320 Records put out the brand new Unlimited Gravity LP, Unlimited, which features a nearly a dozen tracks Weberg has been working on for two years. The deep sexy bass of Rain will be complemented by the deliberate, cinematic sounds of UG. Weberg wil be celebrating his own record with a release party this Friday (August 30th) at Cervantes in Denver, CO.

The tour kicks off in California at the beginning of October, and runs through the entire month up to Halloween back in Cali. We hope to see you out there!