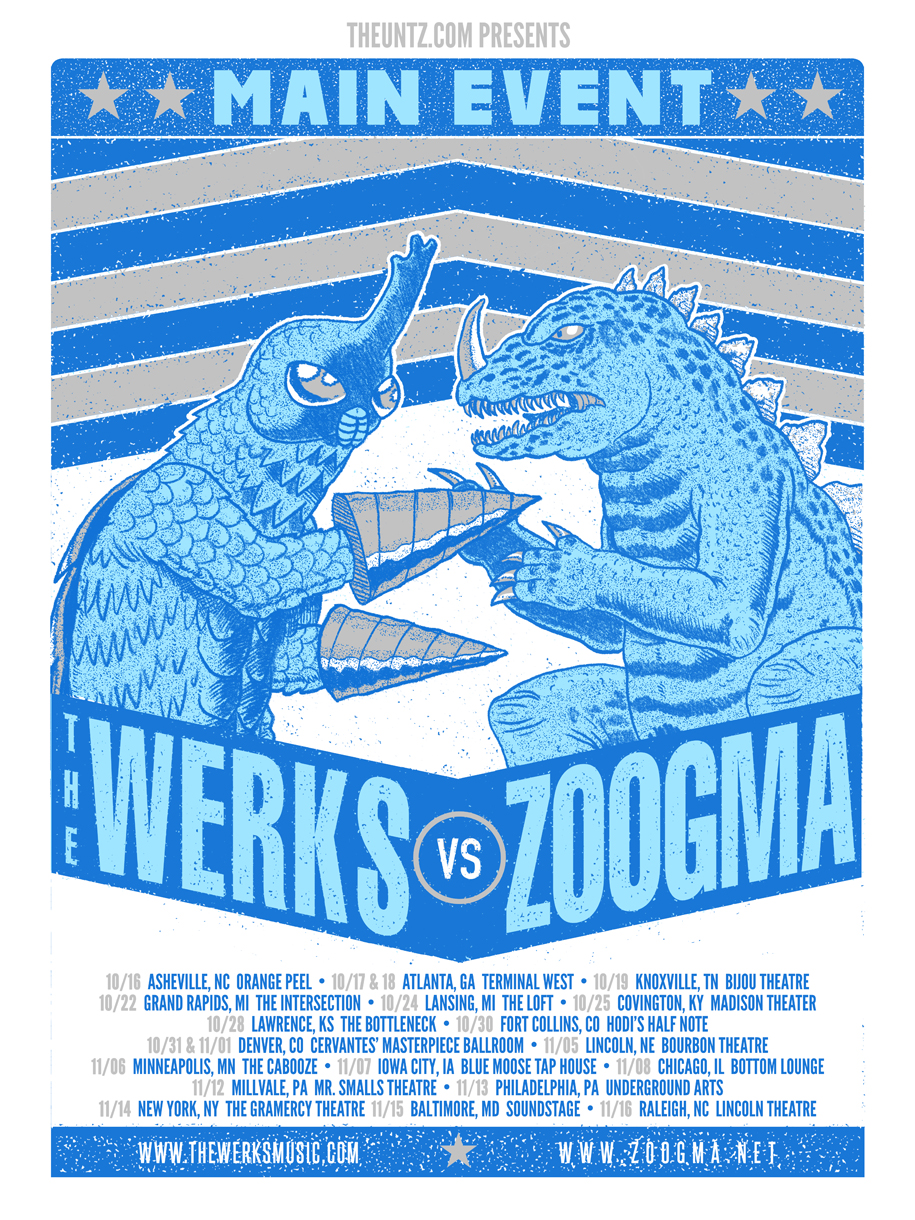 Your main event kicks off this week! Two giants of livetronica, the cybernetic forces of The Werks and ZOOGMA battle it out, head-to-head on stages across the country beginning this Thursday at the Orange Peel in Asheville, NC.

The Werks have had a stellar summer, completing yet another blowout Werk Out Festival, which they've now been running themselves for a number of years, and which has grown by leaps and bounds. The festival saw the band play Pink Floyd's iconic Dark Side of the Moon in its entirety with fellow jamtronica acts Papadosio and Dopapod for a stunning commencement of this year's party.

The four-piece is also coming off the release of its album, Mr. Smalls Sessions, which was recorded in the intimate remodeled church in Millvale, PA just outside of Pitt. The band's cozy surrounds create a warmness and a richness that the band has strived to recreate on stage.

Zoogma is picking up the mantle is the livetronica act on the rise. A road-hungry schedule has kept the band busy, with cross-country dates and massive festival sets at SONIC BLOOM and Electric Forest, among others. Last month, the band retreated up to the mountains of Tennessee to start work on a brand new album. We're patiently (well, maybe not so patiently) awaiting its release!

After the kickoff in Ashevegas, the tour does a double dip at Terminal West in Atlanta, and then closes out the weekend in Knoxville. Then it's off to Michigan the following week for two dates in the Mitten and a run down to Madison Theater in Covington, KY (just outside Cincy), the scene of many a memorable New Year's Eve performances from The Werks.

Then the bands trek across the Plains towards two mega-dates in Denver, a two-night stand at Cervantes Masterpiece Ballroom on Halloween and November 1st. SunSquabi and DYNOHUNTER will be joining the fracas over the two nights, and it's gonna get real serious, real fast.

The tour then heads back across the midwest for shows in Minneapolis, Iowa City, Chicago, and into Millvale, PA for a reunion of The Werks and their studio home away from home. Then off to Philly, NYC, Baltimore, and Raleigh, NC to close out this monster run.

Make sure you enter to WIN TICKETS to any date on this tour--we'll be picking winners for that first run of dates here soon, so make sure you're signed up!

WIN TICKETS TO SEE THE WERKS VS ZOOGMA!