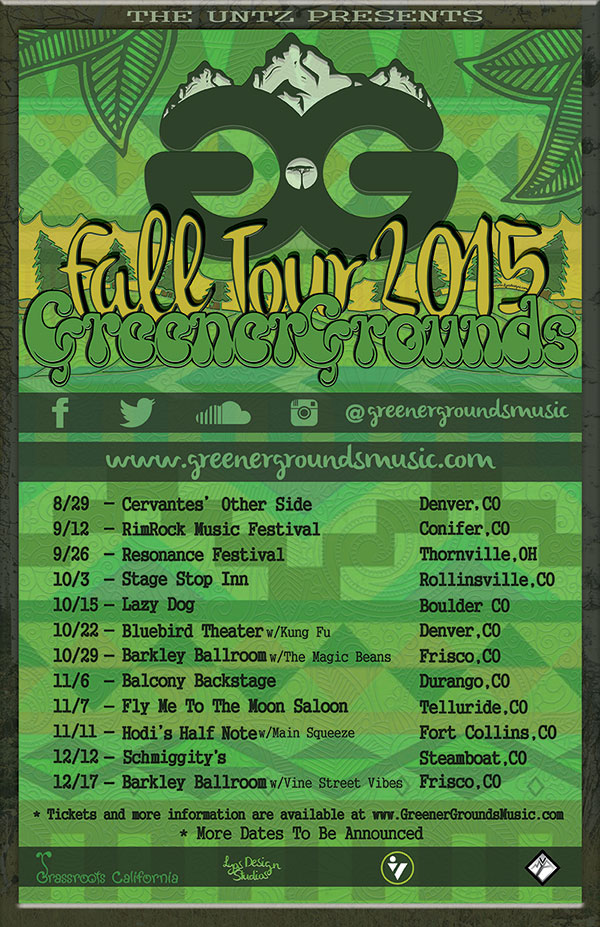 We first introduced the funky five-piece Greener Grounds to our fans last month with the premiere of the Denver-based band's EP, Photosynthesis, which is a jamtronica tour de force. You can read our review here.

We at The Untz absolutely fell in love with the fun sound of the quintet, which ranges from Biscuits-style trancefusion to Cheese-esque jamming. We became so enamored with the outfit that we have decided to present the band's fall tour, which stretches from late August to mid-December.

Guitarists Joe Shur and Mathew Buelt, bassist Danny Littler, drummer AJ Gillman, and keyboardist Roland Hansen are packing their fall full of tour stops all around the great state of Colorado, as well as shooting out to one of our favorite events, Resonance Music & Arts Festival, which has moved to the legendary Legend Valley in Thornville, OH from September 24-26. Greener Grounds will find itself amongst the jam elite like Papadosio, Perpetual Groove (performing its only festival dates this summer), Keller Williams, Dopapod, Tauk, Andy Frasco and the UN, and Peridoni, among others.

Pick any city worth its salt in the Centennial State, and Greener Grounds is playing there over the next 4 months. Denver, Boulder, Fort Collins, Durango, Telluride, Frisco (twice), and Steamboat--and that's not even the full list. Along the way, the band shares the stage with Kung Fu, The Main Squeeze, The Magic Beans, and Vine Street Vibes.

If you like your electronica with a side of jam, we urgently suggest you dive into Photosynthesis from Greener Grounds, and prepare yourself for a wild fall tour.