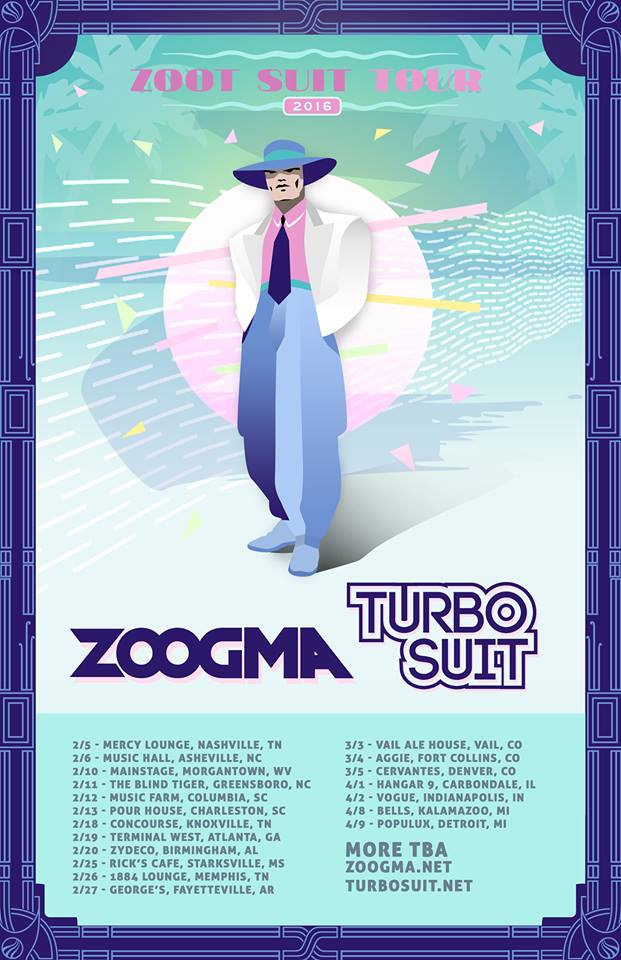 In the interest of full disclosure, I should reveal that I am the reason Turbo Suit exists. I assembled the band. I taught Embry Ableton. I taught Gerlach how to blow his sax. I teased out Jeff's afro.

None of that's true, but I did grow up in the midwest, so I've been seeing David Embry and Nicholas Gerlach's various musical projects for years and years, and Jeff Peterson is a mainstay in the jam community. When we were first tossing around the notion of having our own festival, we knew two things right away: we wanted it to be livetronica centered, and we had to honor the homies who have been with us since the beginning.

Nobody goes harder than Turbo Suit. Three sweaty dudes (and often, some high-class special guests) going balls-to-the-wall for hours each night playing nothing but dance hits, remixes, and live improvisational collabs that the funk to the extreme. It's an all-out dance party, and there's no hiding it.

Producer David Embry, sax man extraordinaire Nick Gerlach, and the human drum machine Jeff Peterson hit the road this week with another jamtronica powerhouse, Zoogma, for their big Zoot Suit tour, which kicks off in Nashville on Friday. It looks like there is plenty of new material on the horizon, as well, so fans will have fresh new tunes for that Discman.

We couldn't be more excited to have our buddies at The Untz Festival, which hits Mariposa, CA from June 2-4. I got a chance to chat with my old pal Embry about what fans can expect from the Zoot Suit tour, what sorta plans the guys have in story for their first trip to Cali, and we settled on how we'll be spending our off-time with one another.

Zoot Suit tour with Zoogma kicks off this week, and we're super stoked for that killer combo. Do you think there will be some live collabs and surprise appearances between the two acts?

Absolutely. Pretty much every night one of the members from another band will be playing with the other band. We're just gonna get super lit with it.

You've mentioned there's new Turbo Suit material in the works, but how do you guys get in the studio time with all the gigs on the road?

Well, we have most of the new stuff written. We will be going up to the new studio; we are working with Third Coast Studios in Grand Haven, MI on the days we have off from this tour to track everything. The album will be done sometime in mid-March with our April 2nd hometown show at the Vogue Theatre in Indianapolis being the album release party.

Who have you been listening to, lately, and where are you finding the Turbo Suit sound heading? Is there any new sonic territory you're invading that might be something new for fans?

We've mostly been listening to John Coltrane and EDM festival trap. You can expect our new album to sound like neither of those two things. Well maybe a little bit of both. You can expect this album to be the best sounding thing we have ever done though. I guarantee that.

Are there any acts on The Untz Festival you're excited to see as fans?

Yes, we will be kissing. I promise. This will be your first time out in California! What should fans who have never seen you before expect from your set at The Untz Festival?

Expect to get funked up and dance your ass off. If you can make it through the whole show without dancing I'll give you 30 bucks.

Powerful words from a powerful man. You can catch Turbo Suit, along with some of the best in livetronica like The Werks, Marvel Years, and Dynohunter at The Untz Festival at Mariposa County Fairgrounds in Mariposa, CA from June 2-4, 2016. Visit www.theuntzfestival.com to grab your tickets!