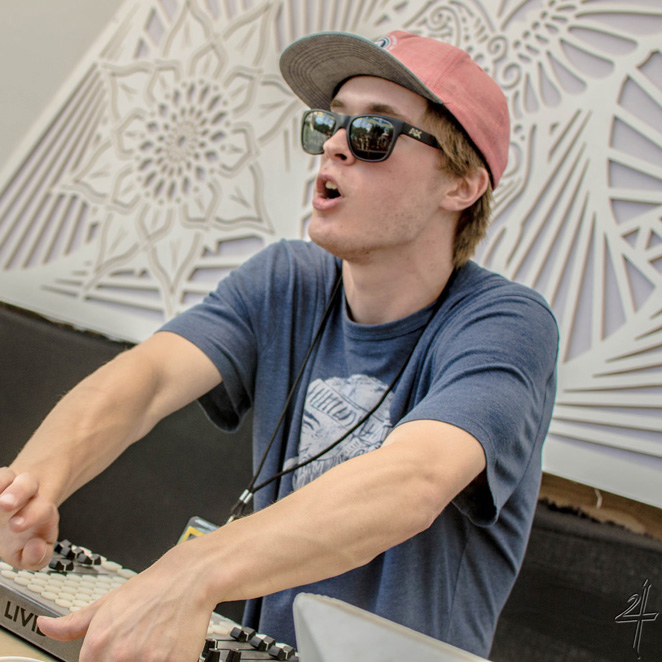 When we first started mulling over ideas for how we wanted The Untz Festival to go down, it was unanimously decided that we didn't want to just go for big names who were tangentially related to the scene in which we've surrounded ourselves. We wanted to put artists on on the bill who are not only amazing at what they do, but those who we've also watched grow from newcomers into bona fide headliners. Cory Wythe checks all our boxes.

Marvel Years is one of the acts we saw pop onto the scene from his stunning remixes and fun live show. We've seen him sit in with some of our favorite acts on guitar, and share the stage with a variety of different artists who all dig his style. We jumped at the opportunity to help present his first major headline run, the Retro Electro tour, and we couldn't be happier to bring him on board for our inaugural festival.

I got a chance to chat with Wythe about what sounds and styles have been influencing him lately, as well as some of the amazing shows he's managed to be a part of in just the past couple of months. If you've never seen Marvel Years live, you have to make your way out to The Untz Festival to catch him in action.

First of all, I gotta imagine getting on the BassLights lineup was a dream come true. How was that experience for you. Do you feel like Bassnectar and Pretty Lights' fans were welcoming to your sound?

BassLights was an amazing experience. It pushed me to re-work everything about my set. I tweaked every track I played specifically for this show as well as tried some new things with my guitar, and the crowd couldn't have been more receptive to what I was doing.

Earlier this fall, you also went on a run with Lettuce. How do you adjust the Marvel Years set when you're performing with heavier electronic headliners versus a rowdy funk band--do you skew funkier or lean on the guitar more in the latter conditions, or are you always just doing your thing?

The Lettuce run was cool because it was an older crowd, so they didn't seem as familiar with my type of music than kids who are usually at my shows. So that forced to to switch up my set a bit and resulted in me playing a lot more guitar. And I'm really stoked it did, because now I feel more comfortable than I ever have when playing guitar on stage.

Your new tune "Go For Launch" is very much in that Marvel Years vein of vintage, fuzzy wah-wah's and vocals. What are you listening to these days that's been a big source of inspiration?

I've been all over the map in terms of listening to music. The new Logic album, Lettuce album, and Glass Animals have all been on heavy rotation. I guess for this song "Go For Launch," I wanted to capture the vibe that I got when I found out I would be playing in Hampton. And that's the song I came out with.

You've been known to collaborate with a lot of artists, either in the studio, or live on-stage with your guitar. Are there any acts on The Untz Festival with whom you'd be interested in working?

Really open to working with anyone at this point. I feel like the coolest collaborations can come from working with people you would have never thought of working with in the first place, and it just sort of happens out of nowhere. And then ends up being really dope.

What can fans who have never seen you live expect from your set at The Untz Festival?

A lot more guitar and some new music that I hope they will enjoy. See you guys out there!

You can catch Marvel Years, along with some of the best in bass like Phutureprimitive, Wick-it The Instigator, Branx, SugarBeats, and more at The Untz Festival at Mariposa County Fairgrounds in Mariposa, CA from June 2-4, 2016. Visit www.theuntzfestival.com to grab your tickets!