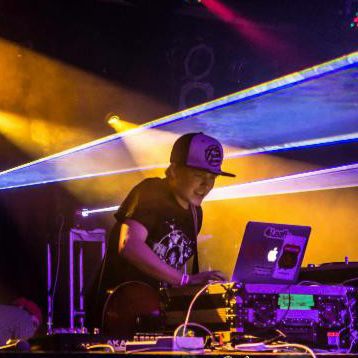 Austin O'Meara’s whole life has basically been surrounded by music. Whether it was jamming on the guitar, rubbing shoulders with B.B. King or growing up in Chicago, the music was always close. O’Meara’s musical journey has resulted in Kinetik Groove, a project dedicated to crafting tunes that showcase the freeing beauty of music by directly connecting with internal groove receptors that lie in everyone.

He's been on a tear, recently, releasing track after track of electro-funk goodness. He's got a number of EPs and singles out that we can't stop listening to, and it seems each week there's another one getting added to his arsenal.

Considering O’Meara is playing multiple sets at The Untz Festival this summer in Mariposa, CA, one as Kinetik Groove and another as Kinetik Force alongside Blunt Force, we asked him a few questions about his work.

At what point did you know music was going to be a huge part of your life and how do you think you got to that point?

I knew music was going to be a huge part of my life when I picked up the guitar and started messing around, eventually meeting B.B King (world famous blues musician). It was from there that I knew music was not only a passion or hobby for me, but could be a career, and I wanted it. High school is when I really started playing with bands and was introduced to the livetronica scene which lead me to producing and recording music about 2-3 years ago as "Kinetik Groove."

If you could speak to one funk/jazz/musical legend, who would it be and what do you think they'd have to say about electronic music?

Either James Brown or Jeff Beck. I believe they would appreciate how far we have come on a scale of blending creativity and out of the box thinking while still keeping the music somewhat relative to its origins.

What would you say is the message behind the music of Kinetik Groove is?

There are multiple messages behind "Kinetik Groove," one being to have fun and let loose (don't give a fuck), but while also being responsible and presentable. That ties into my other message which is pay attention, and don't give up. I've made many stupid mistakes being young, new, and a little impulsive; and if there is anything I learned from that, is to listen to the people who try to help you or point out your faults (in a healthy/constructive way). Don't think you’re a big shot because you opened for so and so once. Stay humble, and things will fall into place. If you mess up; get back up, apologize to those you hurt and are important, listen to their input and feelings, and move forward with your head up higher than before and more knowledge or experience.

Would you say your live act changes when you perform as Kinetik Force with Blunt Force?

We have only played 2-3 sets together. Two being house parties, and one being a renegade set at the "RayJohn" merch booth during Summer Camp 2013, so we haven't had much practice, and the Blunt Force duo lives in Texas, so until Splice came around, it was even hard to put together that whole first EP, Fusion. As for just my regular Kinetik Groove performance, it is a lot different. I have lots of sit-ins, a part time percussionist (Steve Kirsch) and my partner in crime/label mate, Robert Levere (Homemade Spaceship). I also play guitar, bass, keys/piano, and synth over my sets, usually much different riffs than the ones used in that particular song to change it up.

Are you excited to see any acts at The Untz Festival, any first time shows?

I am overly excited to see all these amazing, upcoming acts! First off, I have quite a few Mile High Sound Movement label mates on the line up like Unlimited Aspect (Project Aspect x Unlimited Gravity), Lucid Vision, and my two favorites (style wise); Evanoff and Dynohunter). There are also some Chicago homies such as LWKY who absolutely slay it live. All in all, the lineup is great. Not too many HUGE acts, but just enough to draw in a large crowd for the price, and still have you guys (The Untz), walk away with some profit so we can do this next year.

I played a festival in southern California last year. Same idea, had a couple bigger names as headliners, but had lots of upcoming/local acts. Problem was the planning, and they had way too many artists. It was sad to see such a beautiful festival lose lots of credibility because not only did it seem as if they had too many smaller artists (so getting paid was a shit show), but it was just ultimately poorly planned. You could just walk in if you wanted. Anyways, I like how minimum The Untz kept it and did a great job of bringing out big artists (who still are considered up-and-coming in the big picture, compared to artists like Pretty Lights and Bassnectar) and smaller artists, but are very important in this new scene.

Don’t miss Kinetik Groove, Bass Physics, BRANX, or any other funkmaster at The Untz Festival at Mariposa County Fairgrounds in Mariposa, CA from June 2-4, 2016. Visit www.theuntzfestival.com to grab your tickets!