There's a good chance that many of our fans discovered Kaminanda via his epic festival sets, or perhaps it was his tour with Phutureprimitive last fall. Whatever it was, there's no doubt that anyone who has seen the man perform live knows his stage presence is second to none (and wouldn't doubt that the man used to be a dancer and a member of a touring jam band).

Kaminanda has been known to hop on stage with his support acts, or guest star on guitar, drums, or flute with EOTO & Friends. The multi-instrumentlist has been crafting his own brand of deep psychedelic dub for years now. He's such an iconic veteran in our scene, he was a shoe-in for our list of the Top 20 Psychedelic Bass Pioneers.

As a studio artist, Kaminanda has released three incredible albums on Kalya Scintilla's Merkaba Music and his remixes are incredibly diverse--not only sonically, but also by source material. Some of his fan favorite's include the Grateful Dead's "Shakedown Street" and the Doobie Brothers' "Long Train Running," which gives you an idea of where his tastes lie.

We are thrilled to have Kaminanda headline The Untz Festival, taking place June 2-4, 2016 at the Mariposa County Fairgrounds in Mariposa, CA, alongside longtime allies Desert Dwellers.

Some of your fan favorites include remixes of the Dead and Phish, how important to you are those jam band legends, and why do you think they still resonate with today's niche psychedelic dance music crowd?

Their music is legendary and their fearless exploration of live improv has lead to an immortal following of excitement. I am Influenced by these bands yes, however i have many influences that i am excited about from the world of Classic Rock, Funk,Reggae,Motown/Soul,Classical,World Music and Dub,Downtempo, Ambient and Trance from the Psychedelic side of Dance Music. 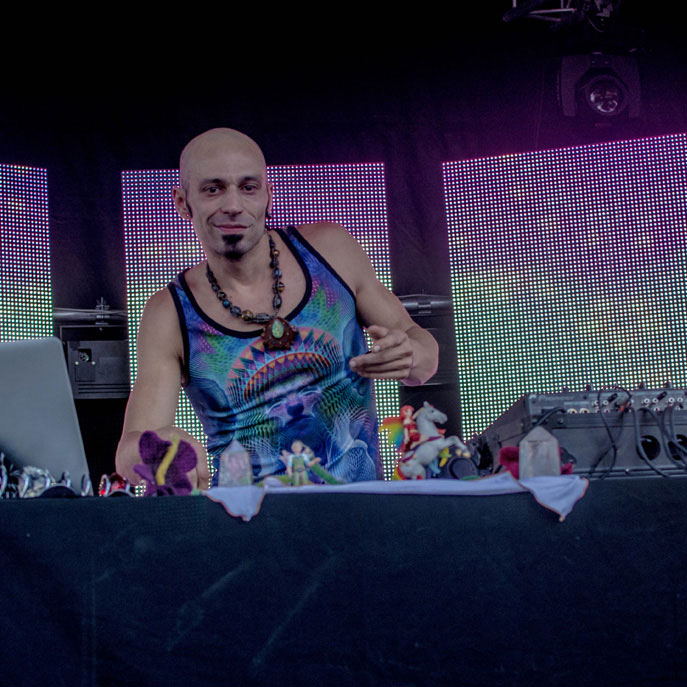 You're sometimes a peak-hour producer, occasionally a sunrise set guy, and we've definitely seen you rock daytime sets. Which do you prefer, and what's your mindset going into each different scenario?

I always pay attention to the vibe of the moment without any plans on what to play. No matter what time it is, I always play for the moment. I enjoy playing all these different times. They all have their magic..

Tell me the story about those infamous tag team sets with Kalya Scintilla--how did those come about, and how do you plan those out with him--or do you?

I think it started when we played an epic 6-hour set in the living room of my old place called the Temple. Our first official tag team was Beloved 2011. It was actually an idea that Elliot [Rasenick] threw into the wind. It went so well we decided to start offering it. We have no plan, we improvise and just have fun.
We've seen you play guitar, flute, drums, and more on stage--what are the challenges and ultimately (hopefully) rewards of bringing more live instrumentation into your sets?

I am excited to start playing more gear in 2016; especially guitar. I guess the challenges are the organizing of tracks and traveling with a bunch of gear. I am in the process of writing tunes to have space for live instrumentation. My tracks up to this point have been pretty full.
***
Visit www.theuntzfestival.com to grab your festival passes and learn all about our inaugural event. You can volunteer, get directions to the site, and browse through our ticket packages and selections.