The world’s funkiest diplomat, The Polish Ambassador, is kicking 2016 off on the right, brightly-colored foot, as David Sugalski drops his 13th studio album on his own Jumpsuit Records. It’s an exciting release filled with a panoply of guests who glide seamlessly along The Polish Ambassador’s funky, glitched out grooves. Prepare for an organic blend of dance and old-fashioned songwriting.

Dreaming of an Old Tomorrow is a showcase of raw talent and human emotion, which jumps out of the speakers. Get caught up in the tropical whirlwind flow of “Tornado.” Beats fronted by bongos and steel drums bob alongside verses from Matisyahu who will be joining Sugalski for his Red Rocks appearance this summer.

The album maintains its sunny hip-hop fusion through the next few cuts like “Chill or Be Chilled,” and “Never Coming Down,” which showcases some fresh-faced MC’s who soar smoothly with each track. “Wonder Continental” is a dreamy collaboration with indie-folk duo Beatbeat Whisper, which includes Jumpsuit mainstay, Ayla Nereo, alongside her brother, Davyd Nereo, on a track that hearkens to the folkies and fans of The XX, alike.

The tongue-in-cheek nod to Zoolander, “Center for Kids Who Can’t Dance Good,” is a pristine illustration of the gentle hip-hop groove The Polish Ambassador has made his signature sound over the years, rocking crowds of thousands (many in their funky onesies) all around the world on the wings of subtle strings, and deep-pocketed grooves. 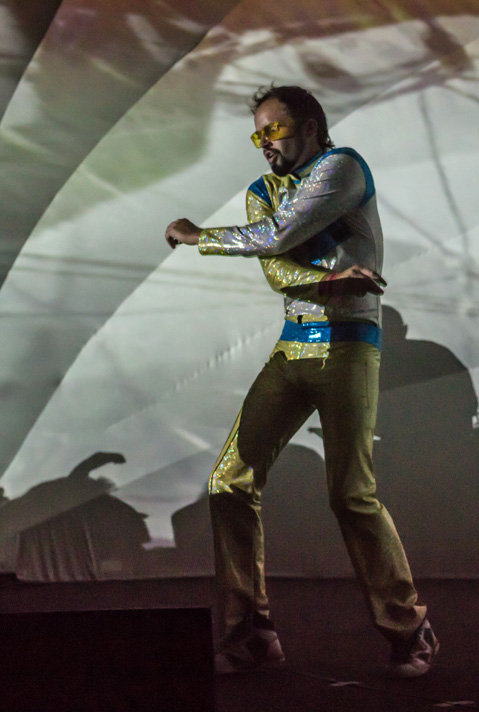 Scattered through the album, fans will find downtempo gems like “Rocket Heart” and “Joy Ride,” heavy on the vocal harmony to pull you through the simple and bright backdrop. The top-quality vocals add a sober grace to the tight syncopation Polish serves up. Both of these songs feature vocalist Katie Gray whose has also worked with Random Rab and Nightmare on Wax.

A major highlight from this dynamic record is the funk-fueled jam “Hicktronica.” Featuring David Satori and Evan Fraser of Dirtwire, this is a hip-swinging excursion led by horns and thick guitar leads. The signature, crunchy Dirtwire twang prances along the bright beats in what will no doubt be a dance floor favorite.

Dreaming of an Old Tomorrow demonstrates just why it’s so difficult to genre-fy David Sugalski’s music into one neat little box. The Polish Ambassador aims to bring everyone together, united under one groove. Don’t worry about labels.

While the danceaholic continuously releases music with conscious messages and undeniable rhythms, he also pushes himself to play live as often as possible while he lives and teaches about sustainability. With marquee festivals like Lightning in a Bottle and Electric Forest already on the calendar, and a headlining date at one of the most iconic venues on the planet, Red Rocks Amphitheatre in Morrison, CO on the books for June 12th, expect more announcements from the ambassador of dance.