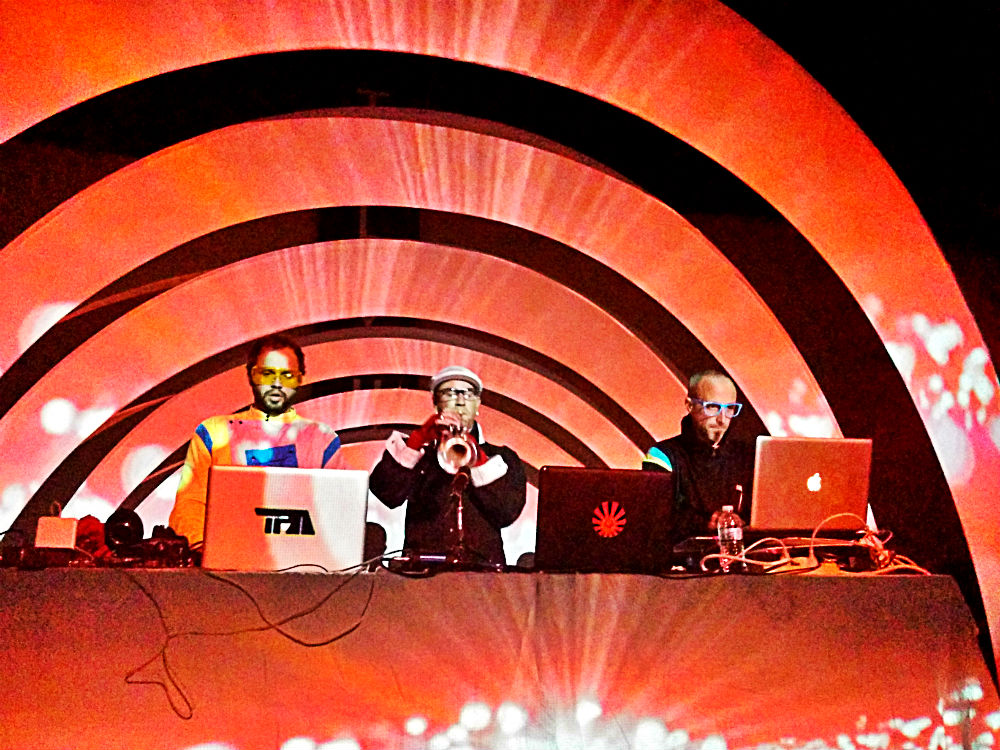 A Jumpsuit Records showcase at Tally Ho Theatre was the place to be at the end of last month in Leesburg, VA. The Polish Ambassador, SaQi, and Ayla Nereo, along with visual artist, Liminus, crafted a delightful evening of masterful music and delirious dance.

Nereo warmed up the crowd with her solo act, transcendent vocals accompanied by minimal instrumentation. She worked a set of loop pedals to create vocal harmonies and effects, as well as to infuse guitar, piano, and percussion sounds into her performance.

Her infectiously warm demeanor coupled with her musical skill had the crowd begging for more, and she was to return for a Wildlight set with David Sugalski (The Funky Diplomat, himself).

After a short break, SaQi made his way to the stage and dove into his world music and deep bass groove, merging genres into something highly sophisticated, yet entirely danceable. The addition of jazz style trumpet brought the almost essential live element into play, as did the cowbell, which was a big crowd pleaser.

Nereo joined him on stage and then closed out the first part of the evening with another solo track, “Let It In,” which she sang just for that night’s attendees, as the song was “never the same twice.”

The first Wildlight performance in Virginia commenced shortly after, Nereo and Sugalski commanding the stage with evident chemistry and astonishing prowess. They shared a new Wildlight track, inspired by Nereo’s “From the Ground Up,” which established a vision of a new world that must be built to reflect emerging values and ideas.

The virtuosity continued through “Twirl Me”, “Live Inside a Dream”, “Oh Love”, and others.

For the final act, Sugalski returned to the stage as The Polish Ambassador after a costume change. Liminus, who had been projecting visuals onto the signature arches for the entirety of the night, was by his side. Sugalski declared, “We don’t get to Virginia very often, but when we do, it’s always a hoe down.”

After opening with a new track from his upcoming release, a room full of gyrating bodies was undeniable proof of his statement, and the dancing continued feverishly for the remainder of the night. At one point, when the crowd seemed to have reached a peak in intensity, Sugalski announced that he would take it up even higher, which honestly didn’t seem possible.

Needless to say, a Wednesday night in Leesburg was an extraordinary setting for music, a true showcase of talent, originality, and collaboration — SaQi briefly joined Sugalski and Liminus on stage with his rich trumpet sounds — and a nonstop dance party in the best way possible. Sad to see the Jumpsuit spring run wrap, but the fall opens a whole new world of possibilities.