On July 13, 2011 the Czar bar in Ybor City, Tampa was invaded by some fresh sounds and enormous appreciation for veteran bass music act the Glitch Mob. Ooah, edIT, and Boreta (Josh Mayer, Ed Ma, and Justin Boreta, respectively) brought some serious finesse to Czar earlier this month. Upon arrival, a line of anxious fans wrapped around the corner of the building. The Glitch Mob has a very diverse fan base; I met several people who traveled from all over the state to catch the show and many more heading to Orlando the following night. On tour this summer with the Mob are Com Truise and Phantogram. Com Truise's sound has been described as "mid-fi, synth-wave, slow-motion funk" and with some dancing room, your body will appreciate the funk he's laying down.

Once getting inside the venue I was perplexed by the set up of risers, the acoustics, and how drunk a particular bartender happened to be. All that aside, after grabbing a PBR I focused in on the second opener Phantogram. Just like the name, this duo was illuminating. Sarah Barthel's voice reminded me of a more electronic Cat Power and Josh Carter's guitar cut through the looping melodies with precision and ease. I really liked what this duo brought to the stage, not only providing sweet tunes, but musicianship in a primarily synthetic environment. This addition to the tour really makes a huge difference. Big ups for Phantogram's unique style.

At the peak of 1am, the crowd was ready and the Mob took the stage. Breaking down the mellow vibe instantly with the Daft Punk remix "Derezzed" from the Tron:Legacy R3CONF1FUR3D album and with the Mob came the lights. There's not much else to be said about the lighting, other than it was mind-boggling.

Each Mobster had his own portal of surrounding drum machines and fresh iPads, engulfing them in their sound and presentation. Wearing matching, pencil thin white ties and black shirts, the Mob came to serve up some glitch. "Derezzed remix" blasted off the crowd followed by Drink the Sea classics "Animus Vox" and "Drive it Like You Stole It," while incorporating the old school jam "Made You Look" by Nas. The show was on point with a great flow of heavy-hitting glitch and orchestrated story telling. The entire time I felt like the Mob was taking us on a trip through their experiences leading up to their new release We Can Make the World Stop, which came out the day before. The title track is upbeat, gripping glitch but mostly a crescendo of pulsing beats that if you closed your eyes you could imagine being on the back of some giant creature tramping through a forest looking for a gathering of light. "Warrior Concerto" and "Palace of the Innocents" are both fantastic tracks that stretch the imagination of electronic music. Hearing them live was awesome and I highly recommend you check out the new LP from the Glitch Mob.

To top it all off, the second encore was a remix of "Seven Nation Army" by the White Stripes. 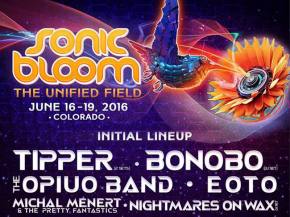