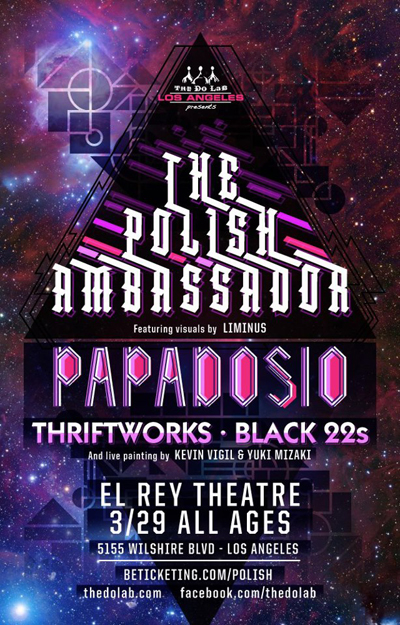 The Do LaB is bringing beat wizard The Polish Ambassador to the El Rey Theatre in Los Angeles on Friday, March 29th along with special guest midwest, mind-expanding jam/electronic act Papadosio. Special guests and a pair of world class painters will also be joining the evening's headliners.

David Sugalski has been criss-crossing the country spreading his brand of hip-hop-laced funky productions, all the while sporting a tattered Swiss ski suit and a head-nod attitude. A favorite of festival promoters and fans alike, The Polish Ambassador puts on one high-energy show after the next, picking up new fans everywhere he goes.

Bringing a little love, community, and transformational energy to the electronic music scene, livetronica act Papadosio has been a staple of the festival circuit since its inception. Melding powerful lyrics, technical brilliance, and audience-inspired activism, Papadosio has exploded in popularity over the past few years through hardcore coast-to-coast touring and good old fashioned solid songwriting. The band's latest album, the sprawling two-disc To End The Illusion of Separation (T.E.T.I.O.S.) demonstrates the quintet's ability to craft engaging songs without sacrificing the music's brilliance either melodically or lyrically.

Joining Papadosio and The Polish Ambassador are Thriftworks, fresh off his Terry-D album release, and the black 22's, a fun and funky DJ duo who will use any record in any genre to get the party started.