The Glitch Mob graced Austin, Texas with its signature sound and unparalleled production quality for an epic show with Ana Sia and Penthouse Penthouse at Emo’s East last week. The night was, without a doubt, one for the books, as The Blade took the live electronic music experience to the next level by allowing all tracks to be played in real time, as well as custom visuals and stunning LED effects. The trio played songs from all eras of its music, Crush Mode, Drink the Sea, and of course the latest Love Death Immortality, leaving both new and old fans thrilled.

The Glitch Mob is known as an electronic super group for a multitude of reasons beyond just the guys' enthralling live performance. The trio genuinely appreciates each and every one of its fans, and they seek to capture and express the voice of the entire Glitch Mob community through their music. This becomes apparent within minutes of shaking hands with the fellas.

I got the privilege to sit down with Ed edIT Ma, Josh Ooah Mayer, and Justin Boreta in the new and improved Emo’s East greenroom to chat with the entire mob about the evolution of their sound between Crush Mode and Love Death Immortality, the human brainpower and technology behind the incredible Blade, and the craziness of testing that technology out on the road, along with many other brilliant concepts.

The Untz: How would you describe The Glitch Mob experience to someone who is completely out of the loop?

Ooah: Adventure dance music is what we always say, because it’s not just your typical dance music. It’s a journey, and if you’re willing to go along on that journey, it’s a bombastic experience.

Boreta: It’s an experience we create through a group of people that we’ve gotten to know over the years and we feel like we are on this journey with. People come to have an experience with music, but its not about us or the songs; its about the experience that people have when they are listening to music at the show. 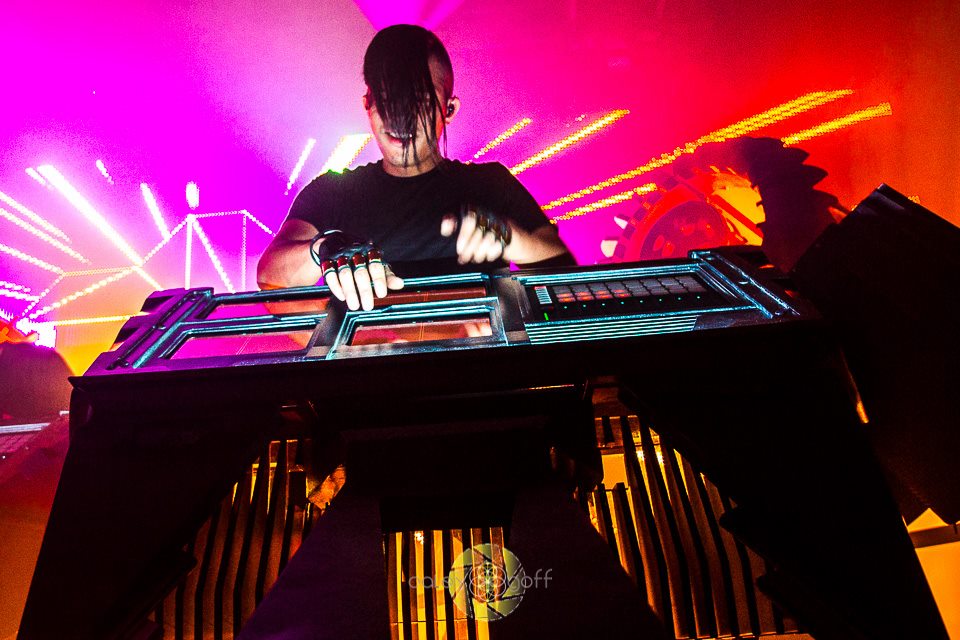 edIT: It’s the audience, the thousands of people out there that collectively make up The Glitch Mob, and The Glitch Mob experience. We’re essentially trying to channel the energy, vibe and collective story of all these people.

The Untz: Ya’ll just started this tour, I actually got to catch you guys in New Orleans at Buku Fest two days ago, what’s the craziest thing that’s happened so far?

edIT: That (Buku) was the first festival that we ever unleashed The Blade at; hopefully we can do that many more times. I think in general some of the craziest stuff that’s happened is some of the technical difficulties that we’ve had, which most people probably don’t even realize.

Boreta: I would agree. The performance system that we’re playing on is all custom developed software, basically an application that is in 0.7 right now so stuff breaks all the time, but that’s part of the fun. We’re actually testing it by being out on the road. We had a programmer out there at Buku Fest named Matt Davis who helped design the whole system. He was actually doing live programming, and one of the controls broke, so he was editing a MAX patch and performativity reprogramming the whole patch while the set was happening. That’s part of the excitement of the whole thing; a guitar amp can’t crash, but this whole system can. For the most part people in the crowd don’t know, because there are many layers of redundancy.

edIT: Definitely, we’ve been doing this so long that if things go wrong, we’re pretty good at keeping cool, keeping it under control and pretending like nothing is going wrong.

The Untz: I definitely didn’t notice anything at Buku, so mission accomplished. Drink the Sea was incredibly successful, what was it like trying to follow that up with Love Death Immortality?

edIT: Honestly, it wasn’t like there was any pressure or anything like that. We never talked about any of that, or even thought about how we were going to top Drink the Sea. Drink the Sea was amazing, but we didn’t intend for it to be a humongous festival experience kind of thing. We wrote it from the standpoint of listening to music, and it just happened that festival promoters kept booking us for big festivals, so we had to try to figure out how to adapt that experience live. The only thing that we took was how to take the storytelling aspect of Drink the Sea, and convey it in a way that is going to make sense in arenas and for really big groups. Never at any point in time were we like “let’s try to outdo that record”, because I don’t think that can be done. That record (Drink the Sea) stands on its own; it has a very special place and time. There’s actually tons of fans out there that like that record (Drink the Sea) more than the new record (Love Death Immortality), and there’s nothing wrong with that.

Ooah: That’s also how we write music; we just kind of write what feels like we want to say at the time, whether it sounds like anything we’ve done in the past or not. We could make another record that technically sounds like Drink the Sea again, just because we wanted to do that, or not. There’s really no comparison of which one is better. 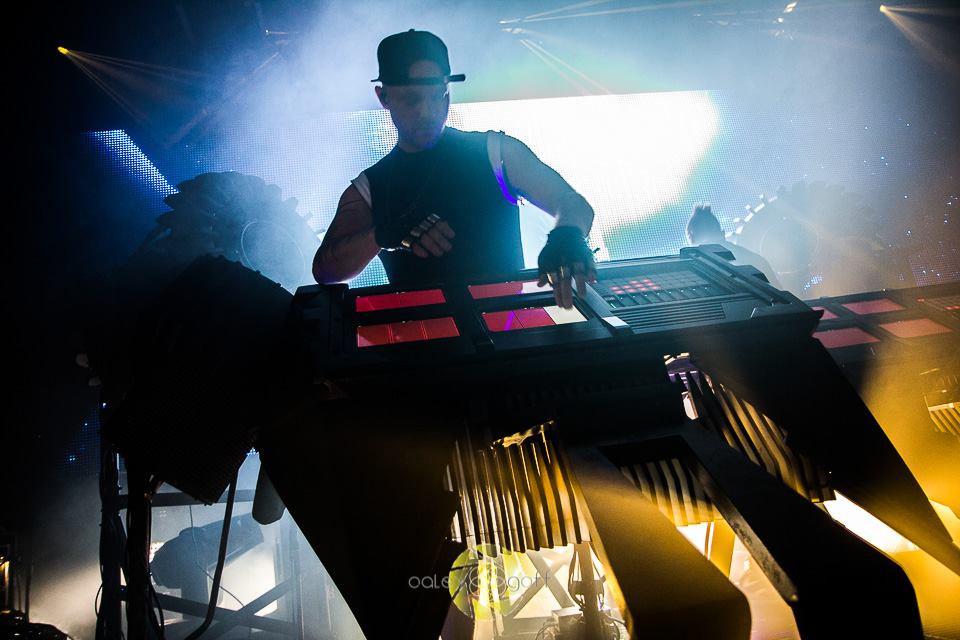 Boreta: Interestingly enough it (Drink the Sea) turned into a successful record, but at the time it was a really difficult release. It became a fan favorite, because I feel like people connected with the music emotionally. It did well on iTunes sells charts, but it’s a fan favorite… there were no magazine covers… it didn’t make a big splash. It was the type of record that just slowly overtime got to where it did.

edIT: At first there was actually a lot of backlash. The die-hard Glitch Mob fans from the Crush Mode year were totally hating on it.

Boreta: Yes, because we started off writing heavy hip-hop influenced dance music, then we went off and had this whole experience and wanted to write something that had a little bit more depth to it, and people were like ‘what the hell is this shit’. I think over time it grew with people then became a ubiquitous record.

edIT: A lot of people who had no idea what Crush Mode even was and discovered Drink the Sea on their own probably still don’t have any idea about songs like “West Coast Rocks” and anything from that era of music, or anything from our solo work; they literally just picked up The Glitch Mob from Drink the Sea on. 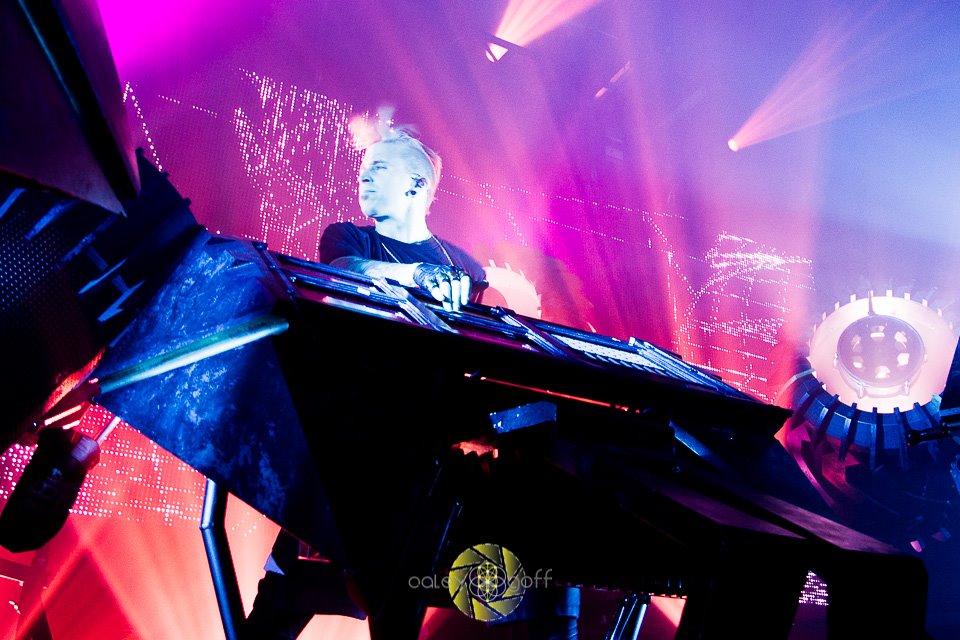 Ooah: It was real interesting, because we often get comments for this new record (Love Death Immortality) like “Oh my god you changed your style so much”. And we’re like actually…no.

edIT: It’s almost like we're just moving to bridge The Crush Mode and Drink the Sea worlds. It’s also just bringing us a little back to our roots.

The Untz: Your new live act is incredibly intricate; I already got to catch it at Buku. What went into creating that?

Boreta: The name of the whole thing is called The Blade. It’s been a progression of our performance systems throughout time. With the progression of the performance we wanted tofigure out how to play electronic music live with no instruments. We’re also just big technology nerds, we’ve been figuring out how to reproduce the sound of the record, as faithfully as possible to the sound. We had designed a lot of stuff ourselves in the past, edIT is a great MAX programmer, and we’re all Ableton people, so we had actually designed everything. This was the first time that we had worked with a whole team of people to take our vision to the next level. This was our way of crystalizing the sound, the feeling of Love Death Immortality. The artist who created the show, Martin Phillips, was able to hear the music and extract what this wants it to look like and feel like. At the core of it, we want to play electronic music, fully electronic with no live instruments but have the drama of live performance with a live rock band, and I think the look and feel really speaks for itself.

edIT: Martin developed the live stage show, he’s the Michael Jordan of that shit. He’s also responsible for the Deadmau5 Cube, the Daft Punk Pyramid, and he did our previous show on the last tour too. He came up with the visual aesthetic and how we were going to encase and house our instruments in a way to fix that aesthetic. Then Matt Davis basically wrote all the MAX patches that helped the instruments speak to the Ableton set, which then speak to Martin Phillip’s whole visual world.

Boreta: It’s a really complicated set-up; there are 14 people on tour. The guys who designed the way everything looks and feel are the same folks that would design the inside of a Star Trek spaceship. They actually design sets for movies, so were like ‘ok, what does the futuristic, spiritual, samurai, ninja, robotic band look like?’ And they’re like ‘ok…I got you’ and draw stuff up and come back to us.

The Untz: Is there anything you want to add about The Glitch Mob, solo projects, or yourself personally for our Untz readers?

Boreta: We love our fans and we love what we do. Thanks to everyone who actually went out and bought a ticket to come to our show, members of our fan club “The Mob”, and anyone who actually purchased music to support, because we were independent, and independent music doesn’t just actually happen. Every little album purchase helps so, thanks! 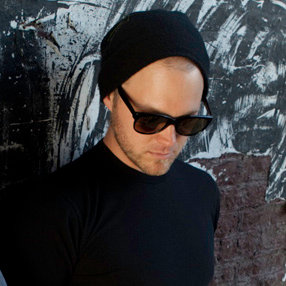