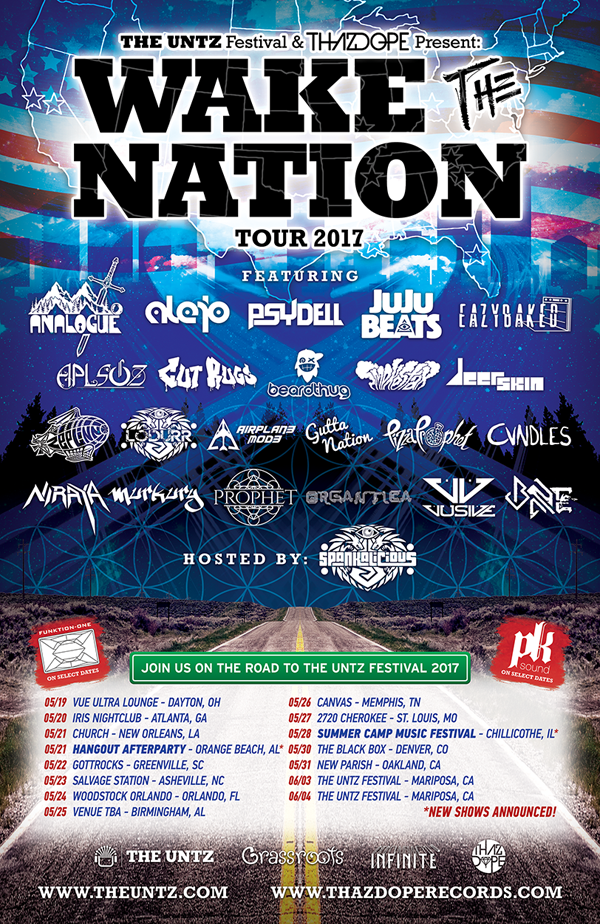 We've been teasing it for a while, but today ThazDope Records finally takes to the road and gets its armada in line for the countryside invasion known as Wake The Nation. Tonight the caravan of rising bass stars descends upon Vue Lounge in Dayton, Ohio, a home bass of sorts for some major figures in the scene, and the spot for the ThazDope crew to raise its flag and charge towards California and The Untz Festival, which kicks off in exactly 2 weeks from today.

A main tenet of the tour has always been about broadening the reach of these young upstarts beyond the towns they're hitting. That's why the Wake The Nation album has dropped today (at 4:20pm, no less), featuring the bold bass minds that are touring the country.

Leading off the album is beardthug, with a tune that will also drop on the duo's Wake album here soon. “Warriors of Light” features label head Spankalicious on vocals (a feat he repeats on his Deerskin collab later in the comp), and is the anthem opening for the rest of the collection.

Obviously there are some standout performances from standbys like Alejo and Psydell, as well as Eazybaked, Prophet, and Smokestax. Be on the lookout for newcomers like Murkury, Airplan3 Mod3, and Zeplinn, and the vets like Gutta Kick and Aplsoz are for reals going to be facing packed crowds on ThazDope Stage when the boys hit Mariposa, California. The whole album is stellar from top-to-bottom and really illustrates the label's dogmatic devotion to forward-thinking bass music.

In the meantime, the tour heads off to Atlanta, New Orleans, Asheville, and more, including an unofficial Hangout after party and an official spot at Summer Camp in central Illinois. Then its off to Colorado and a very special pre-party in Oakland before all sights are on The Untz Festival from June 2-4 at the Mariposa Fairgrounds.

Even more ThazDope superstars will join the party there like Mt. Analogue, Moniker, Toadface, smith., and who could forget that special Yheti sunrise which will serve as our closing ceremony. Two full days of programming awaits. Just check out our schedule if you don't believe me. This is going to be epic.

Snag those tickets at www.theuntzfestival.com before they're gone. Prices jump on May 25th. We want to see the entire bass family out in full force for this one.