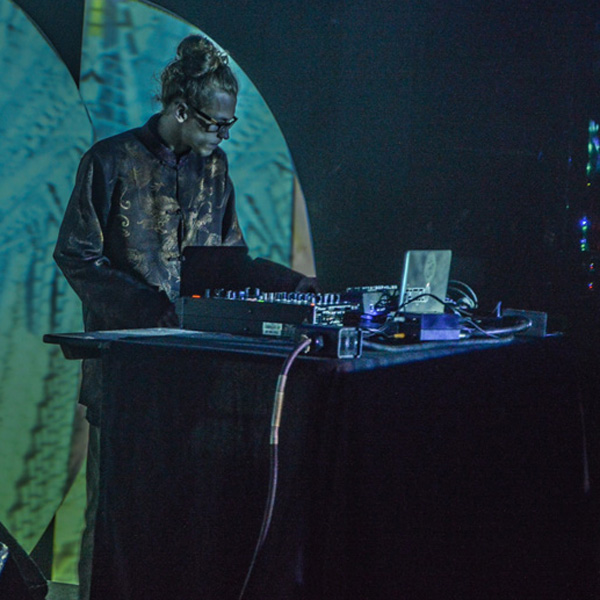 Templo is the purely electronic alter ego of producer and instrumentalist Liam Shea, based out of the bustling bass metropolis of Denver, Colorado.

Whispers is his first EP of 2018, blending flavors of the past like dub with the cutting-edge sounds of the future enabled by music technology. It's designed to trigger the listener to move in mysterious ways. He has been busy delivering music in his preferred format of 4 to 5 track EPs releasing six in 2016.

In his music, you will hear his self conceived signture psychedelic downtempo reggae with more than a penchant for glitchy, vocal motifs, found especially in his latest releases. This is his debut EP on Kalya Scintilla's Merkaba Music label.

Over the last two years, having played alongside some of the top experimental producers such as Shpongle, Ott, the aforementioned Kalya Scintilla, Random Rab, The Polish Ambassador, EOTO, and Bluetech, he knows where his sound is at and also has a clear vision of where he wants of to go. Appearing at festivals such as Envision, Gem & Jam, Sonic Bloom, Once Upon A Festival, and ARISE, Templo presents a unique live experience incorporating downtempo, trip-hop and dub elements, with deep melodic bass.

Steady and stable, yet richly progressive, downtempo yet energetic, this release contains a deliberate restlessness, better ebb on the low end and melodic flow and adhesion compared to his previous EPs. The opener, “Deja,” throws us striaght into the colorful world of Templo's music with glitchy pulsating motifs, large spacey reverbs, and fluid basslines bordering on "funky dub."

“Wei and Jin” uses elevating vocal samples, both words as well as onomatopeia, which to me is sometimes the most interesting instument of sound.

“Cloud of Smoke” features pulsing 16th note stringy melodics interspersed with percussive elements making for an interesting sound effect. An excitingly fluid bass line propels the song ahead. I love it when the bass holds that role in a track. All of this is served with a smoky ambient sauce.

“Listen” has jumpy, sprightly vox cuts (you know I'm additcted to those pitched-shifted cuts). The closer “Spiro” is the most downtempo of the collection, but no less exciting, with impressive layering and microediting, psychedelic vocal chops, and some early Tipper influence.

“I based this EP mostly off my interests in dub and reggae styles,” Shea notes. “I like to include stuff like those huge reverb and delay snares and off-time organ pops as the sort of subtle backbone. I pretty much just spend all day everyday making music, learning theory, and practicing instruments. As Templo I am pretty much set on never including any live instrumentation so as a result there will definitely be many side projects to come.”

“My reason for keeping things purely electronic is, I spend so much time in the studio making these songs exactly the way I want them, I just don’t feel like adding anything in post is very beneficial.”