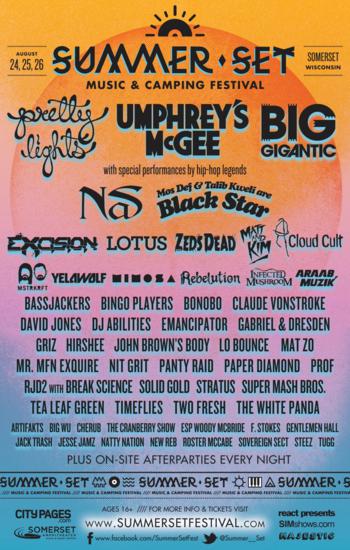 There’s good reason why festi-heads won’t stop mentioning the most intriguing music festival of the season. Never before has the Midwest hosted a camping festival of this magnitude to conclude the year. All that will change on the final weekend in August, when music- fanatics from all across the area congregate in the dairy lands of Somerset, Wisconsin for the inaugural Summer Set Music and Camping Festival. The rookie fest features a lineup with well-assorted genres and high-caliber headline acts on three intimate stages. In addition to drawing upon an audience from three of the Midwest’s largest cities—Minneapolis, Milwaukee, and Chicago—the festival has been able to gain unprecedented publicity in local music scenes through ceaseless promotion.

The peculiar thing about this festival is its origin. With few exceptions, festivals of this scale don’t start out at such a size. It takes time to grow; however, production companies React Presents and Sound in Motion alongside the storied Majestic Theatre in Madison have pioneered new territory in the festival game by introducing a large-scale festival to an area of high demand. Having been born a giant there will surely be some growing pains just trying to assist nearly 30,000 people in a first-time locale. Despite this, organizers have been adamant about reaching new target audiences via marketing to fans of similar live music subgenres, rather than catering to a spectrum full of polarized styles and seeking merely one headliner from each. It seems as though Summer Set really understands from where its fan base comes. Judging from the inter-genre diversity the lineup boasts, with acts such as Pretty Lights, Umphrey’s McGee, Big Gigantic, Nas, Black Star (Mos Def and Talib Kweli), Emancipator, RJD2 with Break Science, Araabmuzik and many more. Promotion-wise, what really set them apart was the heavy ads at other Midwest fests, which proves a keen eye for who is actually listening.

Serving as an experiment in live musical boundaries, Summer Set envelops a rare combo of styling’s from hip-hop/rap to electronic jam and dance music that has this fest guiding the way for other higher-tiered fests looking to expand their fan bases’ taste. They have done an outstanding job bringing festival crowds the chance to see high-quality hip-hop and rap artists such as Nas, Talib Kweli and Mos Def. Also, bringing these artists to the forefront of the electronic jam scene will open untapped fan bases as well as allow for listeners of multiple genres the chance to integrate alternative styles into their festivals experience, a task many festivals struggle with.

React Presents and Sound in Motion recognized the void for an end of the season camping fest in the Great Lakes region and, realizing the potential, seized the opportunity to fill this niche. Heavily investing in a large-scale start-up music fest will always be risky, but in the rapidly expanding industry of camping and art festivals timing and preparation is key. Attributes Summer Set has been training for nearly three years. It’s time to start the show.

Location is a festival’s foundation. Setting plays such an important factor in determining the overall culture conveyed. Summer Set has excellent foresight in this regard, placing the grounds on the locally celebrated Apple River. Allowing everyone to kick back, relax and float on down the lazy river from their campgrounds to see the show. Sounds almost too good to be true, but it’s only the beginning.

Summer Set is anything but your typical mainstream festival. At first glance it’s a genuine large-scale gathering, but what truly separates it from all other fests is the unique opportunity to create an expansive environment from scratch, completely original. Most festivals spend years tempering with the atmosphere and lineup situation. Summer Set’s promotion towards veteran festi-goers will assist with the communal task of forming the festival’s novelty. If you went to any other Midwest fest this summer there’s absolutely no way you haven’t heard of Summer Set before. This type of direct advertisement towards groups already at festivals, teasing us with an unbeatable lineup, urging all to bring their experience and creativity to build what we all hope to be is a gathering here to stay. Now less than a fortnight away one of Wisconsin’s quaintest vacation spots will come to life. Expect Summer Set Music Fest to quickly become an end of the summer staple for Midwest music fanatics.