If "Tarantula" was a remix it'd be somewhere on this list and higher up. Pleasurekraft had to be in my top ten. The duo simultaneously from Stockholm and Miami has penetrated into the public eye with their unique carnivalesque sound. The music is bizarre to say the least and is quite unsettling, but all the more intriguing and addictive. Everything sounds partly like a horn and partly like an animal. The fact that the remix is titled “Sideshow” gives it all away because you feel like you are being thrown right into the pit of a freak show. What is it even: techno? Tech-house? Or the bestial product of the two? For all I know, the less human, the more Pleasurekraft.

Does this even count, since Fedde is remixing his own track? Either way, “Back and Forth” has become an instant classic on the dance floor, this verison giving it a little bit more funk with its ridiculously bouncy bass. Let’s also not forget that Mr. V literally takes us back to the rise of Fedde’s fame with a self-referential blurb: “Put your hands up for New York, I love my city.”

The Boys Noize version of Swoon isn’t very different from that of The Chemical Brothers, but there’s nothing wrong with staying close to the original. This new mix merely adds an electro-house flair with more pronounced bass beats, but otherwise retains very much the essence of the original rather than resembling another track from Oi Oi Oi. In this case more so than others, less is more.

What was a rather upbeat, happy-go-lucky pop song has transformed into what my friend calls “the soundtrack to the Third World War”--thanks to Skrillex, who signed to Deadmau5’s label just recently and has since taken over charts everywhere. There isn’t a specific Skrillex production that I’d sell my soul for, but as a whole, he is a solid producer and fun to listen to. This remix of La Roux (and there are hundreds of them out there) really stands out and showcases his distinct high-pitched sound. Saccharine dubstep at its finest.

Hold On has been my most-played track this year and one of my favorite releases of 2010 so any remix able to do it justice is a gem. Rusko has a very distinct twang and rhythm that borrows from reggae and dub. Many producers who attempt to remix his songs end up sounding a bit off especially if they are trying to convert it into a completely different genre.  I’ve listened to a handful of remixes of this song and they are all terrible, except this one. Sub Focus attacks dubstep with more dubstep. Crisper dubstep. As if Sub Focus decided to enunciate every one of Rusko’s subdued sounds.

Listening to this track makes me flush because it’s quite possibly one of the sexiest techno tracks ever in my book. If there was a chart for “music to have sex to”, this would be at the top. Sexy not in the grimy, let’s-get-down-to-business sense (see dubstep), but rather more of a sensual foreplay. Perhaps this is too much information already.

Leave it up to Nero to make any track writhing with a heavy bassline and convulsing wobbles. While Chase & Status dabbles in a little dubstep with the original, Nero tears it apart and thrashes the bass into the ground, carried by the cries of vocalist Mali and the propeller-type progression.

A very minimal yet delicate remix of the trip hop legends featuring cool tribal undertones by Brazilian producer Gui Boratto and sultry vocals of Hope Sandoval. The façade of the soft, angelic melody is juxtaposed by the rather sinister lyrics, but you would never know just by listening for the song is a constant seduction.

It’s a shame that drum and bass doesn’t get the attention that it deserves in EDM, but thankfully I can briefly highlight the genre because my number two is a collaboration between two established dnb producers, Marky, from Brazil, and the English S.P.Y. Together they have meddled with a track that is near perfection on its own and surprisingly, have not messed it up. …dare I say, improved it? Well, it really depends on your mood. This liquid rendition of the ambient Aundy, a significant increase in bpm, is not light, but not exactly heavy either. It’s just very fast, and not just by definition. There is a sense of great urgency in the tempo and melody that distinguishes it from others. A chase of sorts, for someone who is on a mission.

I don’t know anything about Oliver Twizt. I haven’t heard anything else by him, but that’s okay because this remix is enough, MORE than enough. It is a standalone. When Afrojack dropped this track after Pon de Floor this summer at the Electric Daisy Carnival, I nearly lost my head. And so did everybody else around me. The original Polkadots would have sufficed. It had become an anthem in its own way. But what we heard that second day of EDC absolutely destroyed what remnants were left of the once-techno Afrojack track. From that point forward I expected no less than the growling bass of Oliver Twizt and Darth Vader telling me that we should all wear polkadots. 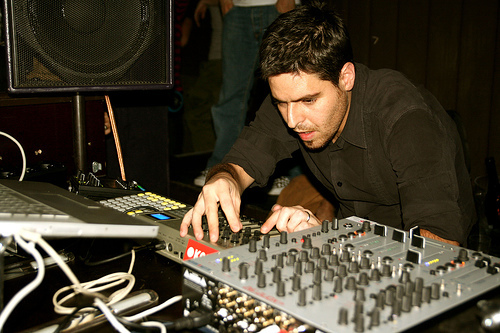