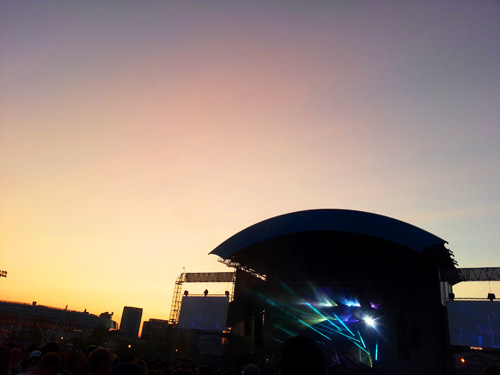 The sunshine was beaming down on a glorious summer day as I did my last shot of Crown Royal and cabbed over to Northerly Island. The light glittered on the beautiful water and the perfect view of the city lay behind the ridiculously large stage. STS9 and Umphrey’s McGee are arguably among the very best touring bands on the circuit today, with over 30 years of combined experience. The two acts toured together back in 2008, and have shared the stage at many festivals, but a lot has changed in the past five years. This joint summer tour is a big one with stops in Kansas City, Nashville, Philadelphia, Boston and several more. They're alternating closers based on the city, so STS9 started it off in UM's hometown of Chicago.

The sun was descending and rays were peeking through the side of the stage, illuminating it as the boys walked on and busted out a beautiful "This, Us." Let me tell you, Sound Tribe and sunshine is so fine! You could still see their lighting display pretty well given it was still daylight, and the weather was absolutely perfect. They got their funky on, got that bass slappin’ going, and got the dance party raging. Russ Liquid’s Liquid Horns (Russ on trumpet and Sam on saxophone) joined them onstage for "Abcees," Vibyl," "Simulator," "Be Nice," and "King Pharoah’s Tomb." I had the pleasure of getting to see them joined by the Liquid Horns  in Madison, WI as well as at Summer Camp Music Festival earlier this year, and it is always a delicious treat. They essentially take the already flirty, beautiful flow to a different level making it downright f-ing sexy. They bring a lot of energy to the songs as well and it is a contagious sort of enthusiasm.

Tribe brought the heat this entire show, never giving us a second to calm down. How could we as they blasted out their beautiful beats, with sparkling keyboard and chimes, impeccable percussion, smooth, creamy guitar progressions, and of course, Murph belting away on either his bass or keyboards/laptop. The encore was a rowdy "Scheme," which I watched from the risers toward the back of the venue for a bird’s eye view. The congregation was bouncing and going hard as Murph shouted “Come on you freaks, we love ya’ll.” Crowd goes wild, Tribe exits, lights go dark, time for a breather. 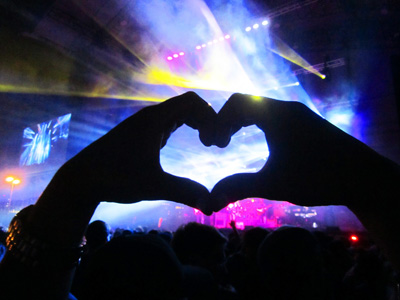 Umphrey’s McGee came out and did a raging opener, "Le Blitz," and from there the ruckus began to grow. Umphrey’s has a lovely penchant for teasing songs, or playing a particular song, then later in the show busting back into that song from 45 minutes ago. That night, they played "Bridgeless" early on, then came back with it towards the end. They also performed a sandwich with Plunger > Dear Lord > Plunger. Their improv and  interactions with each other is what takes their group to the next level.  The set was full of what the band calls Jimmy Stewarts which is a set amount of time each night dedicated strictly to improvisation. There were robust anthems, reeling guitar riffs, and heavy dance rhythms...the island got all Umphreak-y.

All of a sudden, Tribe and the Liquid Horns were coming onstage, and we all began to try to guess what song they were about to drop for the encore. I was admittedly surprised as a rendition of David Bowie’s "Let’s Dance," began. Instantly the crowd got down as the energy of these 13 gushingly talented musicians crescendoed into a beautiful jam. 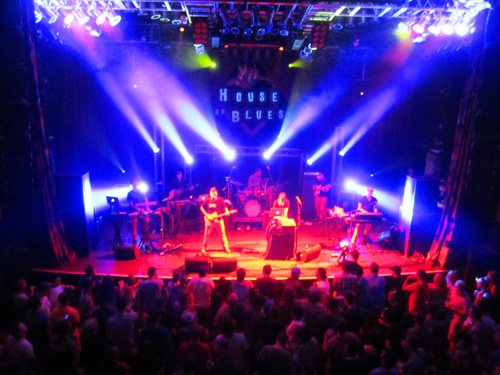 I don’t know about you, but in my circle of friends, there are definitely the “Tribe kids” and the “Umph kids” and they sometimes like to give each other beef. I enjoy all good music so I always find the divide to be somewhat humorous. The great thing about this epic summer tour is that it joined those two groups together as one and there wasn’t a damn person who left the show feeling disappointed by either performance. Thus, Tribe Love, Umph Love, One Love.

But wait, there was more amazing music to go experience! It was off to the House of Blues Chicago for a side project afterparty - Digital Tape Machine and Up Until Now. I’ve said it before, this venue is one of my favorites because it is so intimate - you can see everyone onstage well from pretty much wherever you go in the place, yet it holds a decent amount of people. Digital Tape Machine made me giggle as they all came out in black shirts, red jeans, and glasses. Very hipster, but in a funny, non-serious way. Their electro rock goes hard while their unique flair of videogame-esque bloops and bleeps accentuate the rhythm.

It was getting toward that time of the evening when everyone gets incredibly ornery, and there was a group of at least 20 people around me all clowning and messing with one another, laughter echoing from the majestic ceiling. Just in time for David Murphy (Murph) and his brother Jay to come out and melt our ears one final time that evening. Dubstep meets funk plus Murph on the bass guitar. Jay and David together have a phenomenal sound and energy, and Jay is to thank for the STS9 as a group coming together. He and Hunter Brown played tennis together when they were young and that is how Murph met Hunter. The three of them played music together growing up all through high school. Jay’s project Up Until Now produces fun and danceable tracks, which are tagged things like Electro Ear Sex and Future Funk on his Soundcloud, which pretty much describes it to a tee. I was delighted when they played a track I’ve been getting my groove on to for the past few weeks, "Playing With Funk," as one of their last songs.

It was an absolute privilege to spend the evening with all the beautiful creatures these shows delivered and to dance my booty off to some of the best music packed into nine hours of pure nirvana. Catch this tour before it’s over!