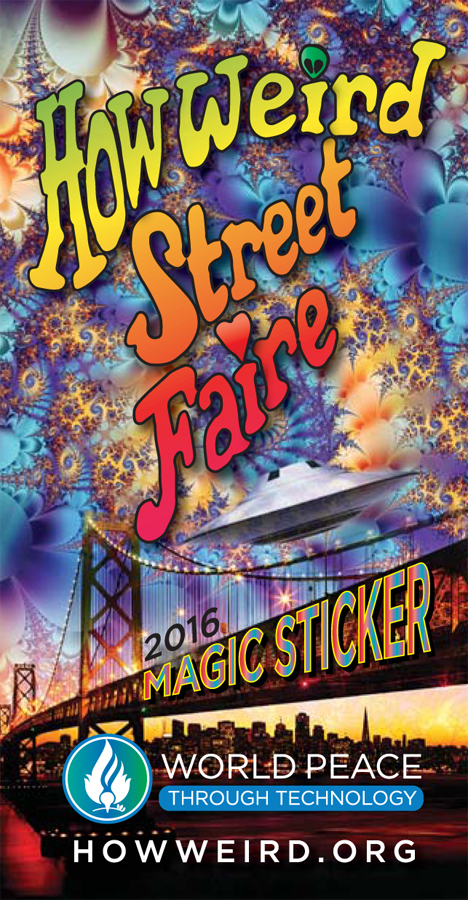 Attention citizens of the world and inter-planetary travelers visiting our blue-green rock in the Milky Way. On May 1, 2016 the heart of San Francisco is transforming for the 17th consecutive year into the weirdest, wildest, and arguably most influential incubators for world peace and consciousness expansion. The 2016 festival season officially kicks off with the How Weird Street Faire: The Cosmic Stew.

This year’s festival is centered specifically in the embrace of diversity, multiculturalism, creative expression, and our varying yet equally valid unique perspectives on what the hell it all means as our galaxy hurls itself at toward a region of space dubbed the Great Attractor at a rate of roughly 1,000 kilometers per second.

The craziest festival/dance party/street fair/costume party/visual, performance, interactive, art showcase/consciousness raising/hippie-peace-promoting/good eats/great beats/vendors and shoppers paradise is inviting every one of you to come bring it from Noon to 8 PM on Sunday May 1, 2016! No lie! Everyone! It is encouraged that no matter how weird you are or how different you think you might be you embrace it, and let it go free! Weird is what its all about because the How Weird Street Faire understands that the only way to build world peace and evolve as an ever-growing connected people on planet earth is to drop the bad attitudes and walls we all pigeon hole ourselves behind – separating ourselves from our neighbors when instead we could be laughing, dancing, and turning it the fuck up!

This year's artists include Justin Martin, Christian Martin, Ardalan, Hypha vs ONHELL, Outersect, Dov1 vs Bogl, David Starfire, and so many more! Click here to see the full schedule!

My recommendation is to buy a Magic Sticker early and ahead of time to set yourself up for the best possible time you could ever have. The lines to get into the How Weird Street Fair can be long because of the thousands upon thousands of weirdos trying to get into the festivities. Although you can buy a Magic Sticker the day of the festival for $20, if you buy one ahead of time its not only super cheap but you also get to enter the party at special dedicated shorter and faster lines only for folks whom planned ahead. Every vendor at the party will be giving discounts and free swag away to those cool peeps that sport the Magic Sticker. The coolest part of the magic sticker? Well, that’s simple enough for me – every drink you imbibe in at the party is $2 less than the normal price had you not thought ahead and bought the magic sticker. And at least for me, those $2s can add up and that Magic Sticker will probably save me a fortune or at least my next month’s rent. And of course, on that deeper level, buying a Magic Sticker helps keep this weirdness going year after year and the support is not only much needed but truly appreciated.

This all day long, all ages, humans and aliens alike festival season kickoff is the hottest and wildest single day gathering in the known universe. With the full spectrum of anything-electronic on ten stages plus world beat, reggae, and live bands to top it off; all communities can kick it together to make one giant happy-go-lucky raging kick ass dance party. For news, updates, lineups, schedules, maps, and more you should navigate to the How Weird website. I’m getting sweaty thinking about it. Did I mention that the festival is going to be packed with the best boutique clothing, jewelry, and art vendors from around the globe? And the food! Enough food vendors will be set up to make it a feast to remember. Oh and let’s not forget – plenty of booze. Nothing wrong with getting your drank on!

This festival encourages you to all dress up in costume “As your true self.” Whatever you individually identify as or whatever your community or homies feel glues you together; put it on blast and express yo’ self to the max. As everyone cranks up the volume in public at the festival on what makes them unique and different rather than hiding it, we all begin to understand just how weird every one of us is and why this is such a good thing. When everyone is weird, there is no norm or common culture to conform to out of fear. When we can all accept our unique individuality, we can stop hating on one another and misreading what we don’t understand. When we look past constrictive ways of thinking, we can begin to accelerate the next plane of human evolution by learning from the other and from the shadow if we only just pay a little more attention. By the way, if this is starting to sound weird, then my words must be working properly. Do not underestimate what I am saying here, this is all about getting weird!

How Weird Street Faire was created from the minds at the Consortium of Collective Consciousness (CCC) nearly 20 years ago in San Francisco. The CCC was part of a larger international movement celebrating peace, community, and understanding. Over time, this effort and collective morphed into a 501(c)(3), a non-profit known as the World Peace Through Technology Organization. From there, How Weird Street Faire was born. The World Peace Through Technology Organization has dreams and hopes of creating a better world through the benevolent use of our ever growing and increasingly powerful technology. San Francisco has historically and arguably still is the center of the world/universe in technological innovation. The organization and the How Weird Street Faire recognizes the potential technological developments on our planet as opportunities we can collectively seize to end troubles that threaten our very existence such as war, famine, corruption, and unsustainable bat-shit crazy bad habits we haven’t been able to kick yet.

This is going to be the first best dance party of the year people! We need to do it right and kick the 2016 festi’ season off properly party peoples! Whether you are in San Francisco, Cali, the United States, South Africa, the EU, India, Japan or even just a Martian visiting for the day to kick it, you absolutely need to start packing your shit and getting a marvelous and freaky weird costume together for this party with a purpose.