Photos and story by: Christopher Conte

Space Jesus hadn't even gone on yet and there were multiple noise complaints. As herds of kids spilled out of Slake's doors onto the New York City street to get some fresh cool air and suck down a couple cigs, they were pushed back in by the aggressive security guards, tired of the countless times the cops had arrived informing them of their intolerant neighbors. The crowd pushed back into the venue like cattle to slaughter, slowly moving and moaning with despair that their nic fix would go unrequited.

The midtown venue a block south of Madison Square Garden was packed to the gills for the November 20 release of Space Jesus' Close Encounters full-length, which had dropped that morning via Smokers Cough.

Chock full of Weird Bass delights and left-field hip-hop and trap, the album showcases the lengths Jasha Tull has gone to distinguish himself from his contemporaries, fusing psychedelic glitch ("Martian Workout VHS"), bizarro rap ("NawLedge" ft Pipus and GDP, as well as a cameo by the mysterious Yung Jafar), half-time spaced out psytrance ("Granpa Was a Grey Alien"), and the trippiest trap imaginable ("Ransacked" ft Lespecial) and a guest spot from Bleep Bloop to advance his tongue-in-cheek, utterly silly sound.

But the most ambitious tune on the record is its most serious--or at least most steeped in personal emotion. Even though "#ferguson" is crafted in the Jeeziest of ways, with the robotic repetition of a key phrase serving as its only content, this bold breakbeat breakdown is easily the most political Tull has gotten, and for good reason.

"It makes me sad that the people paid to protect us are the only people I'm scared of," Space Jesus explained to The Untz. "I'm sick of feeling like a criminal for having plants in my pocket and brown in my blood. I've dealt with profiling my entire life. If it's not for having long hair, it's for the color of my skin." 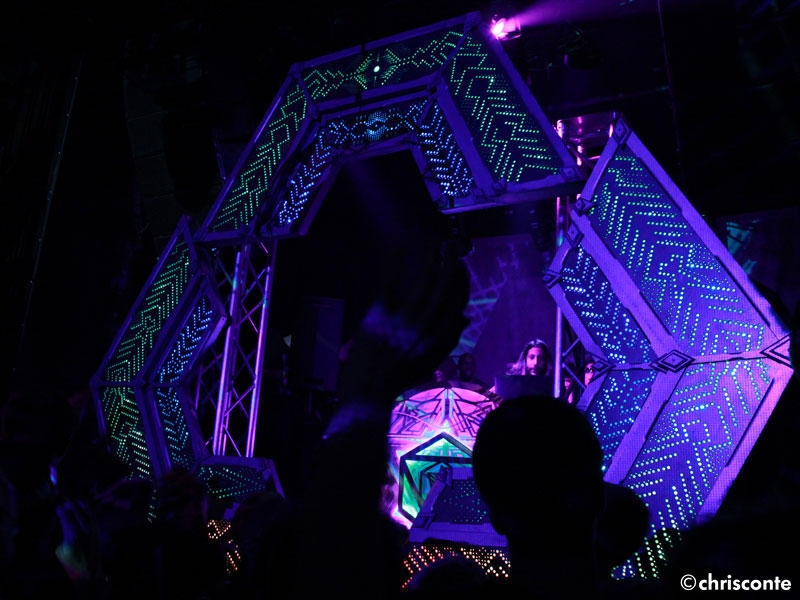 As we entered Slake, the wave of heat slapped us in the face like it was mid-August on the bayou. Esseks was warming up the crowd as we walked in, building on the heat generated by Soohan, and anticipating the energy that would froth over with Brightside later that night. As I inched my way through the crowd excitement was brewing over.

A flashlight gripping security guard was plowing his way through the crowd like a train through a cornfield, making way to the stage for the Dark Alien King himself, Space Jesus. It was time to get lifted to the nether-regions of the universe. We were all packed in like sweaty sardines ready to launch.

The stage was a sonic portal that launched us through the cosmos. Trippy projections, sacred geometry bursting through the center through the spaceship encircling the man himself. From above I watched the crowd twist and writhe with the music. As Jasha shifted through new releases and old classics. The crowd was loving it, the energy colossal.

Under threat of police intervention, the Space Jesus release party subsumed all ill will and soared on the good vibes that filled Slake. Safe for another night from the harsh reality of 24-hour news cycles and unending revelations of brutality, the Close Encounters celebration was hardly alien. It was more about humanity than its revelers would like to admit. But still, that nagging feeling tugs at Tull.

"My question is, 'why can I stare into the psychedelic abyss with a stone cold gaze and love in my heart, but the moment I see a flash of blue light, I'm scared like a baby watching Halloween 3 by accident?' Fuck that. I feel like the events in Ferguson [Missouri] are finally bringing to light the fucked up shit cops have been doing for years. I look forward to a day when I'm relieved to see a police officer 'cause they're actually protecting people," he adds. "But until then, fuck the police."