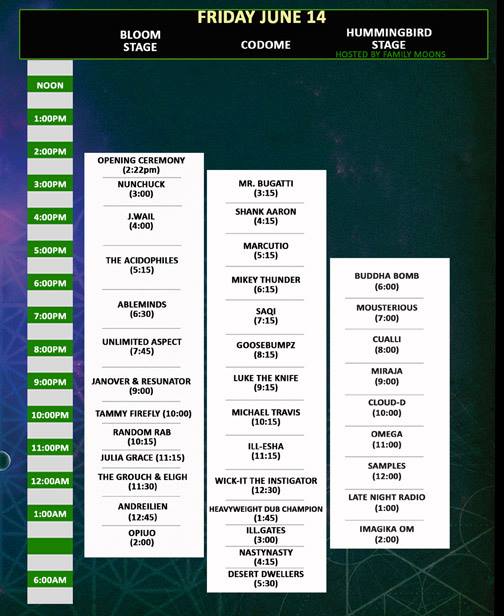 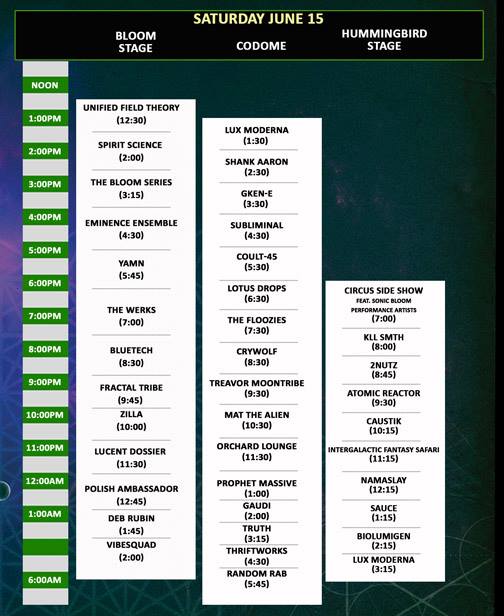 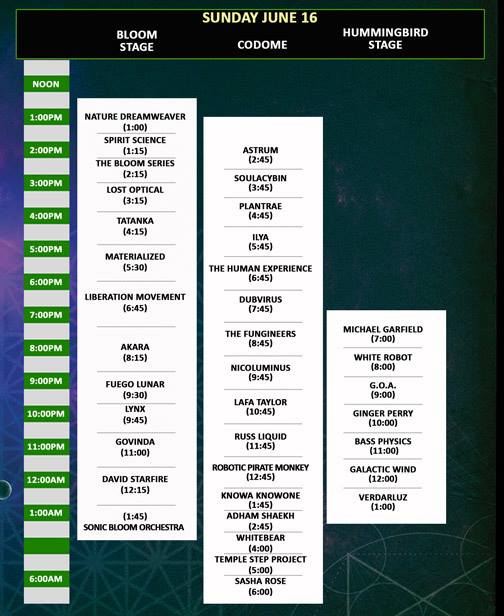 For fans anticipating the wonders and excitement that await at the annual Sonic Bloom Music Festival, we have a few suggestions as to how to best spend your time at this one-of-a-kind "boutique" electronic music festival. The organizers of the annual gathering pride themselves on an incredible assortment of activities to accompany the musical acts who are painstakingly chosen over a number of months. The stars you see on the Sonic Bloom stages invariably headline the festivals and club dates around the country for the next few years, so if you want to get a jump on the industry, the Bloom is a good place to start.

Before we get to the music, it's important to take in the sights and sounds during the day at the festival. One of the newest additions to the gathering is The Bloom Series. The recent explosive growth of the transformational festival scene has resulted in a documentary series which aims to answer the question "just what is a transformational festival." The crew from the series will be on-site collecting more footage, but you'll also be able to see completed episodes of the project which cover the basics of the endeavor, and also delve into the role of visionary art in the new festival environment.

The music at Sonic Bloom is obviously the highlight of the event, so let's get to it. Acts out west don't get to see Wick-it The Instigator nearly as much as they should. This mash-up madman puts a heavy dose of bass into each of his wild creations.

The Floozies have been on a whirlwind ascension of late, and it's no surprise why. Their brand of all-night funkin', party-startin', hootin' and hollerin' is unmatched in the Plains, from whence they come, and we're willing to bet it's the case across the country, too.

There's just something about sunrise sets at Sonic Bloom. The magic, the pure joy, the sun peeking up over the Coloardo mountains, it's an experience unlike any other. The sunrise set at Sonic Bloom has been a career maker for acts who dominate the scene today. And this year, a pair of industry vets gets a chance to usher in dawn at Shadow's Ranch. Desert Dwellers, on the backs of a huge Envision sunrise set that really set the table for their 2013 run, will bring their brand of downtempo, psychedelic Sacred Bass to the wild frontier of Sonic Bloom.

Now that we've raised anticipation to a fever pitch, the question arises "Should I buy my tickets now?" The answer is a resounding yes. Sonic Bloom is notorious for selling out, and strict capacity measures result in a lot of sad folks being turned away at the gate. Make sure you hit the address below and grab your tickets because they are going fast.