Skytree's new EP Sacred Singularity is full of diverse sounds with a coherent flavor.  The music represents a unification of ancient wisdom and technology, of natural rhythms and digital glitches, of earthy and cosmic atmospheres. The title Sacred Singularity is fitting, as it refers, according to Evan "Skytree" Snyder, to the "human soul, or Sacred Space of the Heart, [being] synonymous with a quantum singularity, or wormhole - a spiritual aperture through which the light of the cosmos pours forth, in endless fractal variations of individuals".  This effort shows an impressive array of such variations.

The predominant aesthetic on the EP is that of ethereal nature-inspired tracks.  These have a familiar feel, like something you've heard in a dream, or perhaps a past iteration of your self.  They evoke crystalline visions thru lush bass laden foundations with haunting vocals and echoes. In "Iridescent Tesseract" there is a fusion of Eastern chanting with digital beats and quantum physics theory samples that produces a layered and provocative sonic landscape. This and "See-Through Space" are solid future bass tracks layered with shamanic textures. "See-Through Space" shows off Skytree's production skills with thick syrupy bass and soaring flute sounds that seamlessly blend with a faint humming vocal. Skytree utilizes chanting and devotional singing as well as informative and provocative clips on quantum physics and geology, sacred geometry and unified field theory.  These samples feature more prominently on this album than on his previous efforts (2011's Crystal Consciousness and 2010's Hyphae). The samples are not always as seamlessly integrated as they could be, but they serve as "informational transfer," which certainly seems a main intention of this offering.

Skytree demonstrates his remixing capabilities with Cloud Cult's "Running With the Wolves". The wolf intro, classical composition, and dramatic feel make for a stirring track. This is slightly reminiscent of Emancipator, with glitches and eerie voices rippling in the background. Cloud Cult's vocals remind us of The Cure, giving this a nostalgic feel that we dig. Skytree also remixes Space Jesus' track "Anthony Ayahuasca," adding a spoken sample from the Template Ceremonies on accessing a "window of your perception…that mirrors your awareness". The shamanic drumbeat from the original track carries through as a strong backbone to the spiritual message.

The incorporation of hip-hop in two tracks brings depth to this future bass effort.  Beatboxing features on Skytree's previous albums, and here we get two tracks with terse rap that carries a similar message as Skytree's metaphysical and scientific samples.  "Keep it Sacred, Keep it Safe" boasts a haunting glitchy, trip hop beat with a trembling female vocal. Srikalogy's verses focus on the message of unification that is carried throughout the album. The chorus seems part warning, part invitation to the world of hallucinogens, or to spiritual adventuring.  "Dreamtime" has a glitching, stuttering start that sounds like a door being unlocked.  This is fitting for a track about   envisioning and following a path of truth. This track works better--flows more-- than the other hip-hop track, but both evidence Skytree's diverse and evolving style. 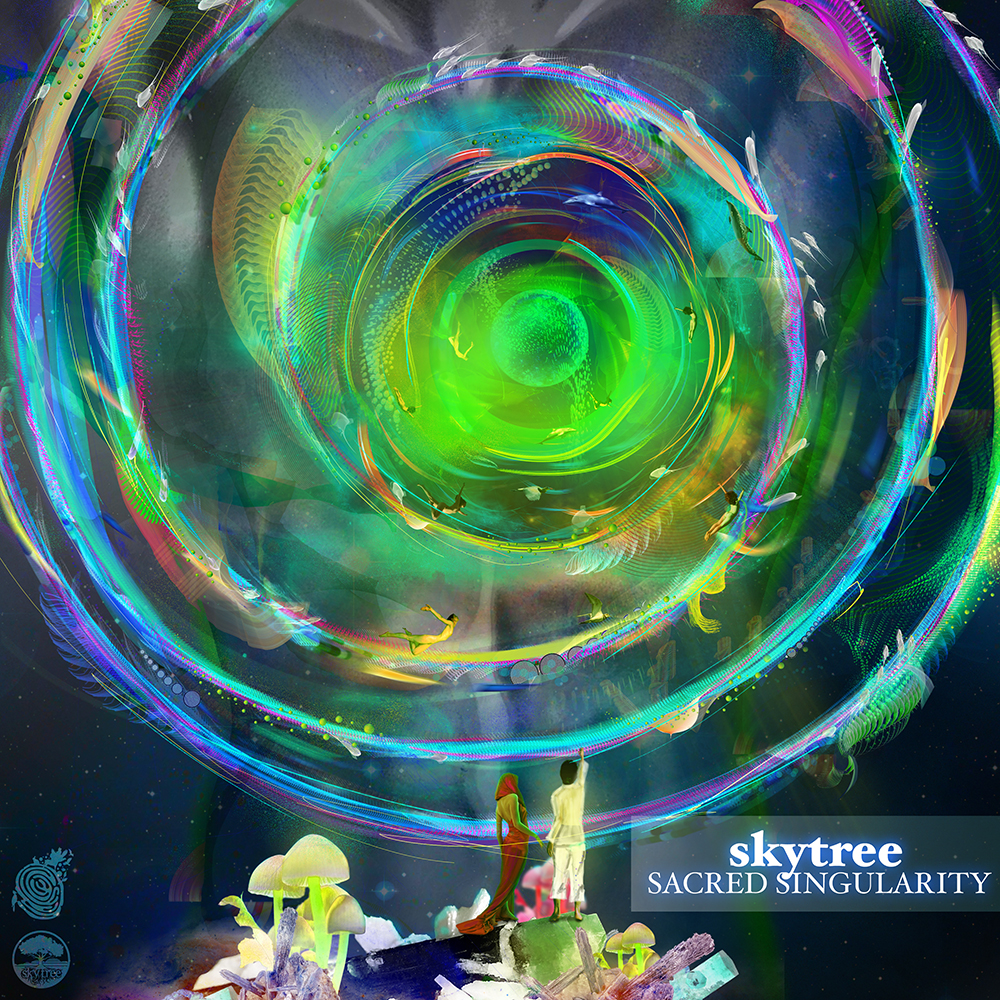 The album art, a collaboration between Skytree and Indian graphic designer, Archan Nair, depicts a male and a female figure watching, or creating, a spiral of spirits. Like the evolution of Skytree's sound, this spiral is one of expansion and creation. Digitized faeries appear to spiral forth from a glowing orb in the center of the piece, which may be what Skytree refers to as the " endless wellspring of unconditional love within you, that no one can ever take away, change or destroy. Your lifespark is a direct connection to the cosmos itself " Skytree's effort  challenges us to "pick up the vibration/ ancient, new, changeless" and to dive into this spiral and take position as creator.

The terse nature of the rap vocals and the discordant segments of speech (as informative as they are) might be off-putting to some listeners.  The subject matter, as well, is not one that necessarily appeals to all audiences. Yet the conscious audience is growing, and for folks interested in metaphysical theories and their manifestations in art, this album is a blessing, a connection to awareness. Who knows, perhaps a few of those that write these subjects off as wonky and out there will happen upon these tunes and ponder again…

"Your lifespark is a direct connection to the cosmos itself - to the Zero Point of All Things. We seek our Source but we are of that One Source, and we are infinite ways of Knowing. Find yourself and you shall find the Universe. … We are forgetful stellar light. There is nothing to add - but everything to remember. We often seek love yet we ARE love. We have all the love we could ever need. I love you! Be blessed and create paradise today my friends...endless thanks for listening and for your co-creation.”  - Skytree