February 17th marks Shpongle's 5th descent upon Knoxville, TN in support of the 5th studio album: Museum Of Consciousness. The 2014 Tour by the same name kicks off February 12th with a brand new Shpongletron, once again built by Peter Berdovsky, a.k.a. Zebbler.
Due to the massive size and scope of Shpongletron 3.0, the show has been moved to Blackstock Auditorium (formerly The Valarium) located at 940 Blackstock Ave.

In typical Posford fashion, fans again will be taken on an ascension to the 5th dimension. The freedom of technology allows Simon Posford to continuously push cosmic envelopes and deliver electronic manipulations unlike any other artist. 'Shpongleoids' will find themselves catapulted into an aural expanse which consistently administers an inoculation against the mundane. All technicalities aside, Shpongle stands out by standing the test of time. The result is music seemingly derived from a parallel universe, ever evolving and expanding by reinventing that which already exists, while equally twisting and warping perceptions and bodies of fans on dance floors around the globe and beyond.

Midnight Voyage Productions and I personally share a special love for all things Shpongle since he was one the first big artists we started working with all those years ago. When the only date we could book Simon Posford in 2010 was the Thursday of Hangout Festival, we needed an angle to keep Shpongloids in town one more night: 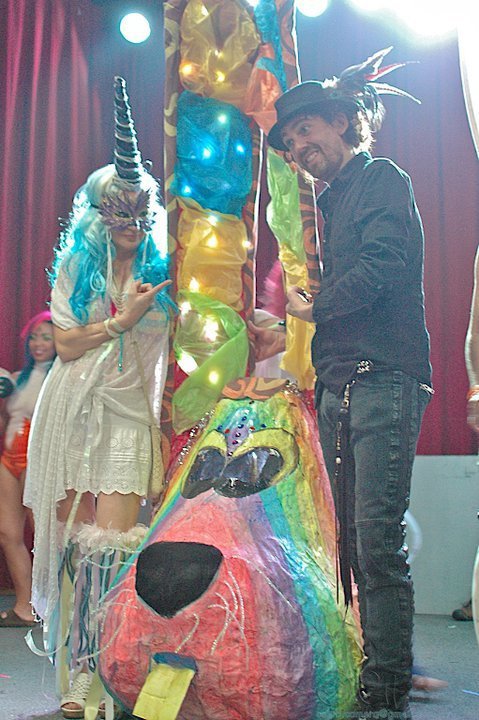 It worked: We rolled up our collective sleeves and for almost three months, a group of dedicated volunteers and myself dedicated every Saturday to bring into being such oddities as a live puppet show, unicorns, a 'Rabbit head, made out of paper, 10' tall', Shpongle on a Shtick (parade of masks) Jellyfish mobiles, a giant octopus, a praying mantis, Shpongle flowers all over the venue and all the colorful things!
Feb 17th at NV will be no exception as once again, we'll fill the the night with kaleidoscopic delicacies such as the "Frame Of Mind" exhibit, perfect for a trip to the Museum Of Consciousness, a jellyfish parade (in case you are wondering exactly 'How The Jellyfish Jumped Up The Mountain') trippy clouds above your heads, underwater theme below, live artists for extra color, special performances throughout the venue, and other surprises galore - filling this psychedelic cornucopia to the brim!
Knoxville's affinity for Shpongle seems to be returned by the artist and we're hoping to equally dazzle Desert Dwellers with the way we do things here. We have been looking for a chance to book Desert Dwellers and the pairing with Shpongle is beyond perfect.

The release of their Seeing Things Remix EP, set for Feb 10th, is even more incredible, as it's pretty much our favorite Desert Dwellers song! "Seeing Things" lends itself to an eye-opening, all encompassing experience on Feb 17th, which fans will hopefully walk away from with a lasting impression and food for thought.  And, at least a few of them, with a souvenir.

So strap on yer moonboots y'all and hop on this Midnight Voyage Spaceship straight into outer Shpongolia once again!
Shpongle: Museum Of Consciousness Tour 2014!
SIMON POSFORD PRESENTS THE BRAND NEW SHPONGLETRON 3.0
Presented by Midnight Voyage Productions & 90.3 The Rock