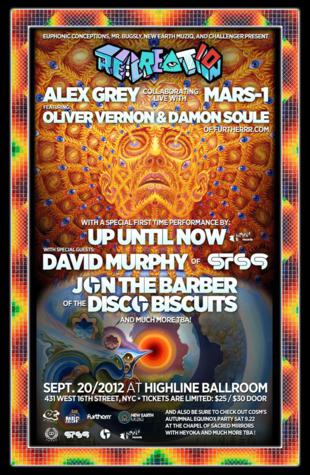 RE:CREATION hits the Big Apple on September 20th for a show at the Highline Ballroom, with a historic artistic collaboration between great modern psychedelic painters Alex Grey & Mars-1, and a first time musical collaboration of members of STS9 and The Disco Biscuits with Up Until Now - David Murphy (STS9) on bass & Jon The Barber (Disco Biscuits) on guitar.

Showcasing a very rare and unique live painting collaboration between Alex Grey & Mario Martinez (Mars-1), who recently collaborated for the first time in San Francisco at EC's  "Bicycle Day" party, this show also marks the first time that veteran "livetronica" pioneers, David Murphy and Jon Gutwillig, will be playing with Up Until Now of 1320 Records.

It will be interesting to see how this one unfolds, to say the least. The addition of Barber's guitar and Murph's bass to the keys, production, and live drumming of Up Until Now's duo of Jay Murphy & Kyle Holly will be fresh to hear - especially to fans of instrumental jamming with their electronic music.

Long time supporters of both the Disco Biscuits and STS9, EC is very excited to present these collaborative performances along with partners Mr. Bugsly, Challenger Presents, and New Earth Muziq.

And these guys are just getting started on the lineup ... the party goes from 7pm until 4AM.  Look for tons more additional musical artists and event information to be announced in the near future.

For now, circle the date Thursday September 20th, and figure out how to get to the Highline Ballroom in New York City!

The Untz is happy to be giving you a chance to experience this special event for FREE!
Click Here to Enter to Win a Pair of Tickets!

Fans of Alex Grey and Mars-1 considering coming into NY for the weekend will also be happy to know that their collaboration, along with Damon Soule and Oliver Vernon's, will continue throughout the weekend for a very unique full-moon Autumnal Equinox celebration on Saturday September 22nd at Alex Grey's property COSM (the Chapel of Sacred Mirrors) in upstate New York.

This follow-up full-moon event event will be open to the public and will provide an intimate look at some of the innerworkings of possibly the most well-known and respected psychedelic painters of the modern era.