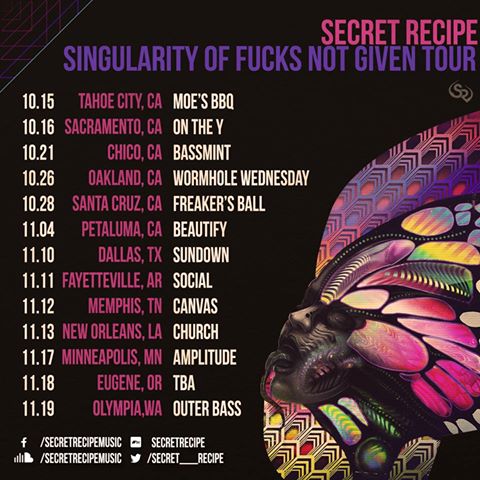 Benji Hannus is a busy boy. He's already set off on his Singularity of Fucks Not Given tour, which precedes the release of his new album of the same name by a little over a week. The release on October 25th on Wormhole Music Group precedes his album release party by a day, which happens to be his crew's biggest event in its illustrious history. But we'll get to that in a second.

Today, we get to premiere Secret Recipe's collab with Detroit's Ancient Mermaids from the new album. “Pirate Ted” is all over the place. Glitch-hop one second, trap the next, and a healthy dose of dubstep and future funk thrown in for good measure. This is one flexible tune. With a bit-crushed, computerized sound, the secret recipe for this track is clearly all the sounds of the contemporary underground sound with that special Benji sauce.

With a number of shows coast to coast, the album release party on October 26th will be the biggest and boldest of them all, pairing Secret Recipe's sound with a monster Wormhole Halloween featuring NOISIA, EPROM, Anklepants, Tsuruda B2B Noer the Boy, and more. That's just insane. That will be at The New Parish in Oakland, California, where you can find Wormhole every Wednesday with the best new sounds in the Bay. And catch Benji on the rest of his whirlwind tour this month and next.