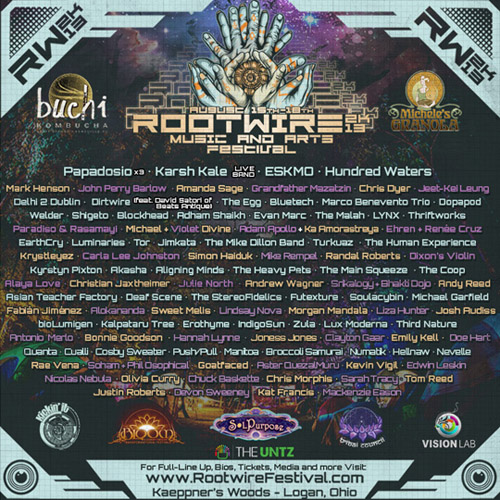 Join the adventure that is Rootwire Music & Arts Festival. With a family feel enveloped in the live music talent and creative outpouring that has made it a premier music and art event in the midwest, the festival is about to celebrate its fourth year in style. This weekend (August 15-18), a group of artists and musicians will converge on Kaeppner’s Woods in Logan, Ohio for a weekend of transformation.

Founded by Papadosio, a psychedelic electro jam rock group that tours at a ferocious pace, they have seen the many good (and sometimes not-so-good) characteristics of a festival. Along the way, they have absorbed what spiked their passion and splattered it on a blank canvas along with eclectic and forward thinking artists, sparkling visuals and installations, vibrant nature, and effervescent vibes that has left only two words on the mouths of its previous attendees, “Mind blown.”

Yes, this isn’t your average festival. It’s an underground home for a lot of the industry’s budding talent from the midwest and beyond and it provides them an outlet to fully explore their creativity while playing, without the expectations to pull out crowd pleasers or fit a particular mold. Get ready to throw down and let go with Eskmo, Bluetech, Dopapod, Shigeto, LYNX, Thriftworks, Blockhead, along with three nights of Papadosio and many more incredible artists.

The ticket price is currently $125 (will be $140 at the gate) and includes music, wooded camping, free showers, early bird entrance on Thursday, parking, the whole shebang. There is no VIP - the one ticket price gives you access to all areas (except backstage).

Come stretch and unwind at the multi-practice yoga program going on 4 hours of the day. There will be educational, inspirational, and ceremonial workshops to intrigue and expand your mind. Visual artists, installations, and sanctuaries will contribute to this immersive experience that Papadosio has handcrafted as their ideal gathering.


Believe me as someone who has worked behind the scenes at music festivals - a lot of artists who seem awesome and down-to-earth can be D.I.V.A.S. I’m talking a rider 30 items long filled with expensive, rare liquors, food you can’t find within an hour radius, and brand-specific odds and ends that have nothing to do with them putting on a good show. At Rootwire, it’s all about the music and that is one of its shining aspects. The simplicity of a group of artists coming together for the music and the people, and not just for the money and the glory, is how music festivals were supposed to be. So cheers to our Roots and come kick it at Rootwire this weekend. You won’t regret it.

In line with Rootwire’s reputation, followers of founding act Papadosio are equally respected for their passion and unique artistic abilities. Adam Epstein had the opportunity to pick Papadosio keyboardist Sam Brouse’s brain and ask questions about his thoughts on the movement, acts, and future of Rootwire.

In your mind, which aspect in particular sets Rootwire apart from other festivals in the Midwest?

I think that our fans set Rootwire apart from other Festivals in the Midwest. People feel a deep connection with the festival and the grounds. There is an amazing group of people who put incredible amounts of energy into making it comfortable and enjoyable for everyone.

Many of the mammoth festivals have trouble including all of their audiences in a healthy, creative as well as constructive way. Meanwhile Rootwire boasts such an abundance of art in all styles, what are some methods of involving everybody in attendance?

We want people to bring what they do, or if they don’t do anything, we want them to feel comfortable learning a new skill. I think that there is such an overwhelming feeling of inclusion here that you really need to try NOT to be involved.

Is there a certain theme or motif that you believe Rootwire portrays to their patrons? What exactly does Rootwire want the festi-goers to take home with them and gain from this experience?

I think the most important thing for me is the quality of the production and the music.  Everyone is obviously going to focus on different aspects of the festival because everyone is different and there is a lot of stuff going on, but I think that our standards are so high when it comes to music and our sound that, if people walk away satisfied with the quality of the show, I will be overjoyed.

There has been a lot of growth and change not only from Papadosio, but from the entire production of the festival, would you insist on expanding attendance? If so, how do you maintain this trend without sacrificing the integrity as well as standard of excellence that is seemingly synonymous with the Rootwire franchise?

We go to enough big festivals to know that we don’t want Rootwire to be too big, but in order to continue to increase the quality of the Rootwire experience we know that naturally it has to grow.  The past two years I remember going to the site worrying whether or not the experience would be as intimate for the patrons as the year before, but I have stopped worrying because I think that the veterans of the festival lead by example. I know that as long as our hearts are in the right place and the people we choose to work with are on the same page that the experience here can only get better.

Is it fair to label this gathering as a “consciousness” festival? How would you avoid this sort of pidgeonhole?

I’m not really sure what consciousness means anymore, at least not in the context of genre.  It is really frustrating because I agree with a lot of aspects of the “consciousness” movement, but I am really uncomfortable with those ideas having a sound or a style of clothing.  If we don’t want to pigeonhole ourselves, then we need to play the music we want to play and say what we want to say.  We are all somewhat frustrated with the clique facet of “consciousness” 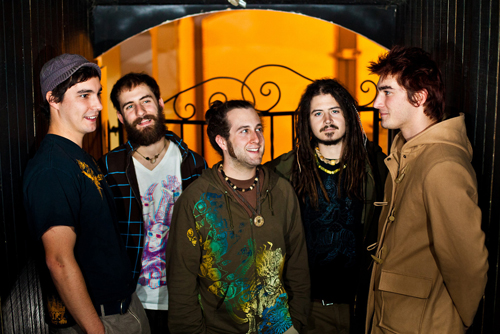 After “We Are Water” debuted last summer and in autumn T.E.T.I.O.S. earned great notoriety across the festival scene all PapaD fans are eagerly awaiting the next album. Can we expect to hear new material this year as well?

The next album is a few years off I think, but we are writing new songs.  I really relate to the album form of art and I want the next album to be totally new never before heard material.  But in order to keep it fresh we are going to continue writing new material, but not release it on an album.  Maybe we will release a collection of E.P.s, but not an album, not until we have a clear idea of what we want to do and time enough to do it right.

Taking a look ahead, who are some dream headliners you would like to include for future Rootwires?

Headliners are always the hardest part I feel like, and mine are usually way unrealistic, but I would obviously love to have Radiohead play…I mean - I can dream right? My best idea for the future is to have a classical pianist play Chopin’s nocturnes late night, just to give the whole place a little more space and people a different experience. 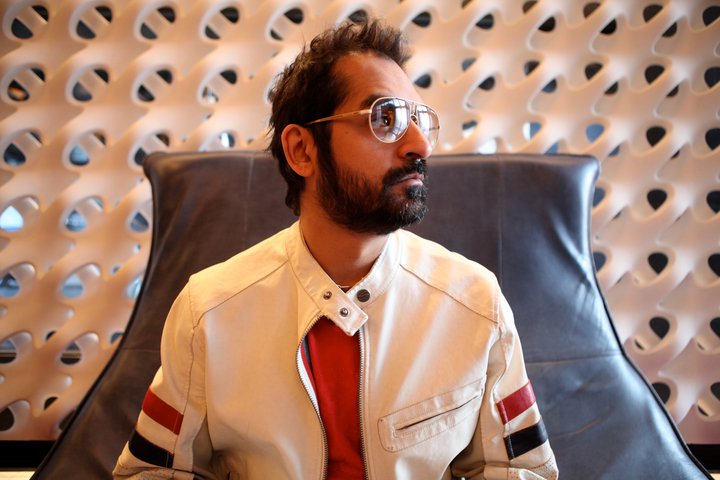