Popular Houston nightclub Rich’s was transformed into a dance hall fit for Ibiza as Robbie Rivera took the stage on May 20th.

Earning a spot in DJ Magazine’s annual Top 100 list in 2009, it was clear that expectations ran high for Rivera’s set. A native of Puerto Rico, Rivera is known globally for his remarkable skill in producing and remixing, as well as being a top record exec. His label, Juicy Music, includes the likes of chart-topping producer David Guetta, as well as Swedish House Mafia member Steve Angello. As a seasoned DJ who has performed on almost every continent, Rivera was destined to put on a show that no Houstonian at Rich’s would soon forget.

The patchy dance floor buzzed with excitement and anticipation as local DJ Josh DuPont spun an outstanding set that prepared the energized attendees for a night of non-stop dancing. At last, at 1 a.m., Rivera emerged from the backstage shadows and began setting up his equipment. Teen ravers and middle-aged clubbers alike clamored to the front of the stage as DuPont wrapped up his set and allowed Rivera to take over.

Rivera opened with a huge club track that encouraged everyone to flock to the dance floor as it emphatically asked “do you want to dance?” Rich’s proved its acoustic worth as the track’s explosive bass shook the entire club. Presumably picking up on the club’s ability to amplify a bass line, Rivera continued to drop one banger after another, drawing the crowd even deeper into low-end seduction. Each track had its own infectious beat and short tagline—a crowd favorite being “now you monkey see monkey do”.

Unlike many popular DJ’s, Rivera interacted quite infrequently with the crowd. Aside from raising a finger in the air to call a bass drop or motioning his hands to stimulate the dancers below, he did not speak one word the entire set. This was actually quite a refreshing aspect of Rivera’s performance. He did not distract his listeners from what he intended for them to do all night: dance their faces off.

About halfway through the set, however, the crowd seemed to grow a bit lethargic. Whether it was the non-stop bass or long sequences of fast paced house tracks, it was clear that a little variety was crucial. Rivera obliged, dropping one of his most famous trance tracks, “Girlfriend.” Justine Suissa’s vocals moved serenely through the crowd, giving dancers a short breather. Rivera, with a sly smile on his face, brought his arms up in the air and easily persuaded the crowd to do the same. After holding a note for what seemed like hours, Rivera let off his most massive bass drop yet and transitioned into a remix of “Girlfriend” that was featured on a 2010 Jersey Shore 2 compilation album. Within seconds, the crowd rapidly progressed from a trancey sway to tribal dance. It was quite a display to observe: a multitude of people jumping around the dance floor and haphazardly waving their arms while simultaneously spilling drinks and accidentally awarding black eyes to those who tread too close.

After recharging the crowd, Rivera filled the remainder of his set with vocal tracks and some of his most popular and acclaimed hits. A familiar tune put smiles on the faces of older clubbers as Rivera threw down a spectacular remix of Depeche Mode’s “Personal Jesus.” Between hits, Rivera dropped some of the hardest instrumental tracks of his entire set. Rivera alternated between fist-pumping anthems like “Rock the Disco” and borderline-trance vocal ballads such as “Back to Zero.”

As his set drew to a close, Rivera took his last swig of champagne and metaphorically put on “Float Away”, rewarding his devoted audience with tranquility upon their departure. Even though an after-hours DJ quickly began to set up his equipment to prolong the night, it was apparent that the lasting impression Rivera gave to his fans was one that could not be matched. 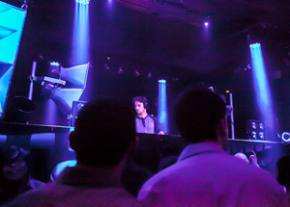 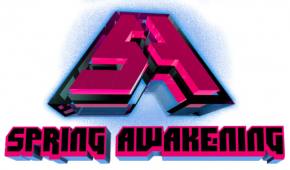 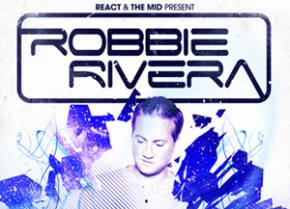 Robbie Rivera hits The Mid in Chicago on January 26 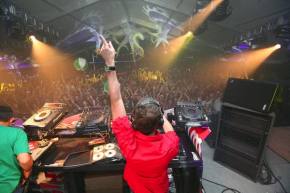 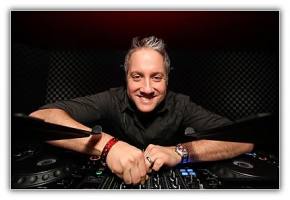