Last week, prodcuer Jeff Montalvo, better known as Seven Lions, dropped his new highly anticipated EP, Worlds Apart. This EP marks Montalvo’s third in just two years. What’s different about this release is the level of experimentation by Seven Lions. Dabbling in trance, dubstep, chillstep, bass, and electro, Worlds Apart is a testament to how high the bar can be set as far as creativity and innovation in the EDM scene is concerned.

Focusing more on songwriting this time around, Seven Lions sought out to create tracks with more vocals and less of purely dance floor hits. To make this vision a reality Seven Lions employed the help of popular English singer Ellie Goulding for the song “Don’t Leave,” and electronic-dance singer Kerli on two songs, the title track and “Keep it Close.”

Also on this EP is a new version of “Strangers” originally off of last year’s The Mortal Instruments: City of Bones (Original Motion Picture Soundtrack) which was produced as a collaboration between Seven Lions, duo Myon & Shane 54, and singer-songwriter Tove-Lo.

The opening track “Don’t Leave” featuring Ellie Goulding is a striking allusion to Seven Lions’ familiar chillstep sound, but with poignant lyrics and surprising progressions. One minute you’re immersed in a calm wave of electronic sounds, the next you’re sent off the edge by the compulsion to get up and dance. Not just a tune to get down to, but also a catchy sing-along you’ll find yourself reciting it throughout your day. 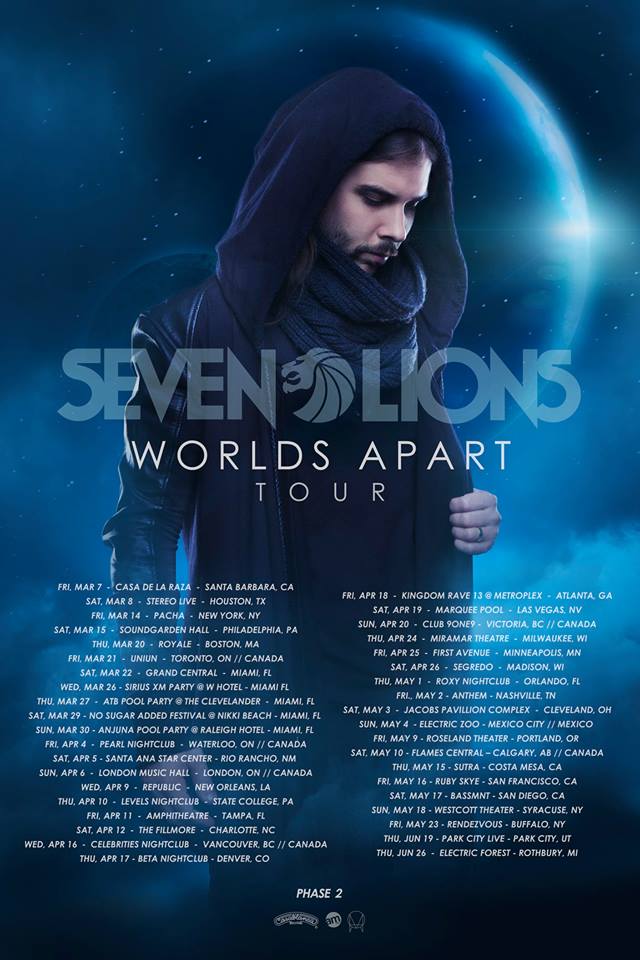 The EP’s showcase track, “Worlds Apart” with Kerli lending vocals stands out. You can feel the nostalgia of electronic songs of the past, while also experiencing a new take on this field of dance music. The flow of this track bounces to and from all corners of EDM with dub womps to melodic sounds, drum beats and glitches; this mad scientist experiment is sure to be a hit. Kerli is also featured on “Keep it Close” a hauntingly beautiful song that delves a little deeper into a darker shade of electronic music. It showcases Kerli’s vocal range set to a piano tune which intensifies the mood of the overall song. There’s certainly an alternative sound to the track which sets it apart from many electronic songs out there today.

The new EP also brought back “Strangers” to re-release it with an added touch and flair notoriously found in Seven Lions’ remixes. Although still similar to the original, this version brings out the lyrics, vocals, and passion that its predecessor had hidden under more aggressive dance beats.

However, there is one track on this EP that is purely instrumental. Entitled “Nepenthe” its absence of words is not a shortcoming and rather amazingly exceeds mere compensation for the lack of vocals. It’s mesmerizing from start to finish. From its mellow beginnings, drum infused core, to the dramatic build that drops its listeners through an intricate infusion of sounds and heart pounding bass.This track was in fact my favorite. Seven Lions is known for his love of metal music and its influence can be felt through heavier bass and some head-banging worthy moments in this tune. But, just when you think you’ve got it figured it out it completely changes to a more trance like feel. It is this incorporation and inspiration of various genres, done so flawlessly, that makes Seven Lions an innovator and fearless musical explorer.

Worlds Apart is an incredible new addition to the Seven Lions catalog. Any EDM fan will be sure to appreciate the variety and creativity that this EP was constructed upon. As soon as you experience it you’ll be wishing you could see it live, and the best part is you can! The Worlds Apart Tour is in effect right now and will hit both the east and west coast as well as some places in between. Get all his tour info right here: www.theuntz.com/artists/seven-lions.