Photos and story by: Ellie Salrin

As the live music community continues to grow, some of the artists, fans, and lifestyles have come under scrutiny (especially in the electronic music community). My experiences over the last several years have shown me both ends of the spectrum. I have been attending more “transformational” events, which focus on people coming together and contributing toward a collaborative experience, leaving less damage and litter behind, and opening our minds to learning about ourselves and our world to bring something back to the table when we return to real life. 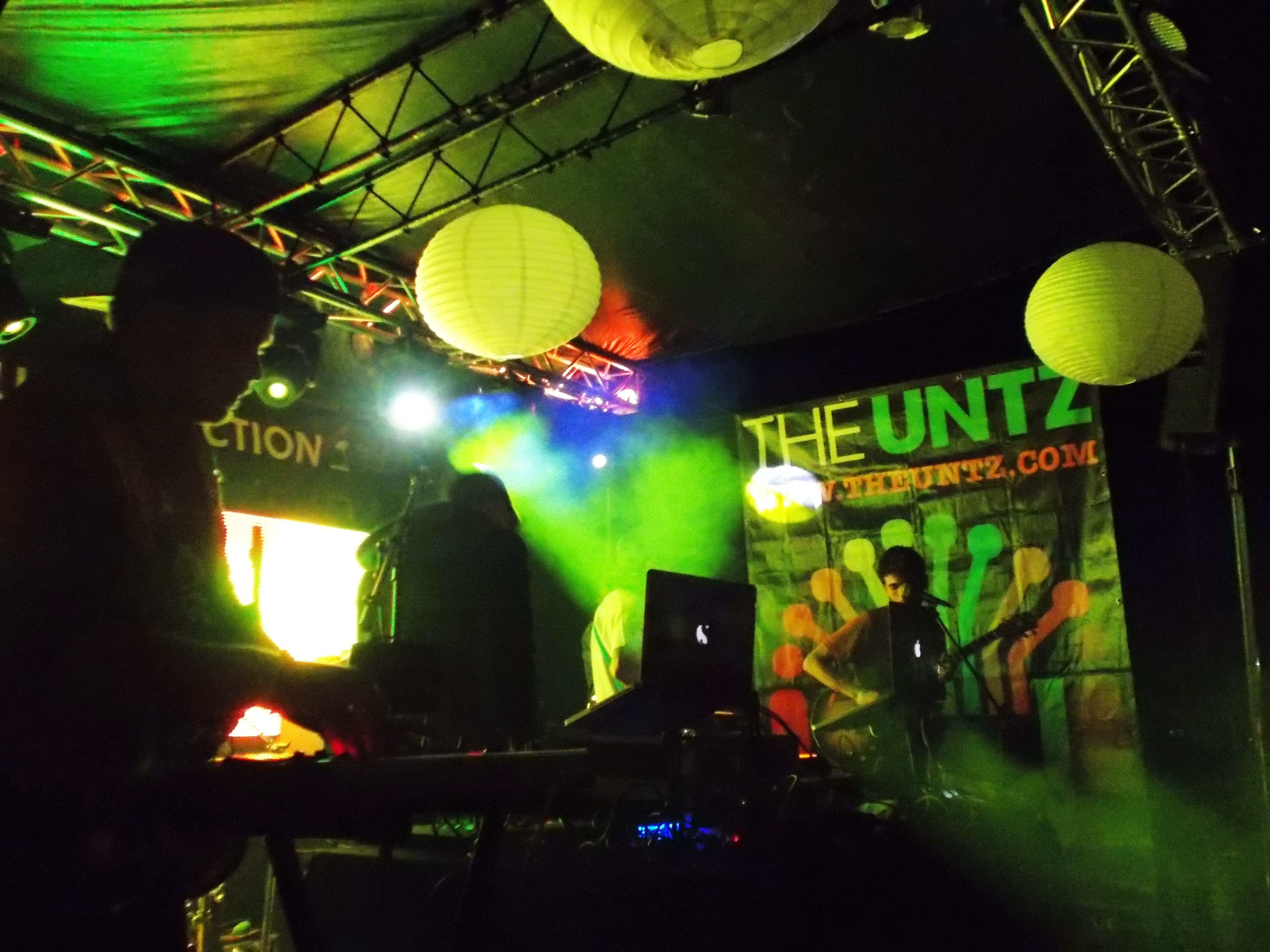 And so it was, that I found myself at a gem of an experience deep in the beautiful red rock mountains of Loveland, Colorado. The second annual ARISE Music Festival awoke my soul and spoke to my heart. It sang a song of gratitude, connection to our sacred mother earth, and a deep desire to dance under the moonlight to the rampant soulful music all weekend long.

The Untz hosted the SOULS RISING stage, in partnership with Souls in Action, that was the perfect disco party nestled in a glen of large trees. From each branch hung an assortment of items like dreamcatchers, wind chimes, and other sparkling odds and ends, all magnificently twirling in the crisp mountain breeze as bass, jungle beats, and various electro-fusion groups brought The Untz flavor to the ears with pristine production. Souls in Action is a collective of young, hungry, like-minded individuals creating change through music, art, and social activism. This was the overarching theme of the fest, and was honored in all aspects of the hybrid event.

I got there just in time for Tribal Seeds, one of my favorite contemporary reggae bands. They have an electric and irie stage presence, with songs about girls, ganja, and giving, that brought a smile to each person I laid eyes on. A live art row was set up on either side of the soundboard as painters splattered and flowed to the music all weekend. Late Night Radio did some dirty future funk mini sets in between some of the artists. One of the headliners was Beats Antique, who came in strong with their strange and enticing world music electro circus. Zoe Jakes’ costumes, marching band drum, and belly dancing blend perfectly with Sidecar Tommy and David Satori’s visceral musical talent and the psychedelic LED backdrop. They played several tracks from the A Thousand Faces albums, including “Beezlebub”, their collab with Les Claypool, and busted out their newest track “Sideswipe” which was released just two days prior. Get freaky with them on their upcoming Creature Carnival tour with Shpongle (Simon Posford DJ Set), Emancipator, and Lafa Taylor.

That evening, up-and-comers Filibusta, Krooked Drivers, Marvel Years, YuYu (duo comprised of Colorado artists Cualli and Omega), and more dazzled at The Untz’s Souls Rising stage. The Polish Ambassador ravished us all as the second headliner of the evening, throwing out old school hip-hop tracks including “No Diggity,” remixes like Michael Jackson’s “Beat It,” and Little Dragon’s “Ritual Union,” and several tracks from his most recent album Pushing Through The Pavement, including a cameo by goddess songstress Ayla Nereo. This album, made with the help of Miss Nereo and Mr. Lif, is a testament to this community using music as a platform for change. Due to the outpouring of positive feedback from this album, the three artists are working on a forthcoming album, which will debut along their fall tour. Their revolutionary “Pushing Through The Pavement: A Permaculture Action Tour” will join local organizations, permaculture groups, sustainability educators, natural builders, and gardeners bringing education and skills to put the principles of permaculture into tangible reality. The world’s funkiest diplomat is an inspiration for us all to, as he has articulated, “party with a purpose.”

On that first radiant evening, I meandered the grounds and found countless nooks, lounges, and bohemian style areas everywhere I went. These havens were decked out with pillows, tapestries and fine fabric, glowing with lights or lasers at night and filled with visionary psychedelic art incorporating spirit animals, sacred geometry, or energies of all kinds. In between sets, there were captivating cirque performances. I found myself immersed in one in particular, sitting below a large metal structure from which outlandish yet elegantly costumed women dangled, contorted, and played with fire. Mysterious music with a blend of bass pulsated, as the lyrics “life of a gypsy” flowed repeatedly. Having uprooted my life and traveled the country this year, it seemed quite appropriate. 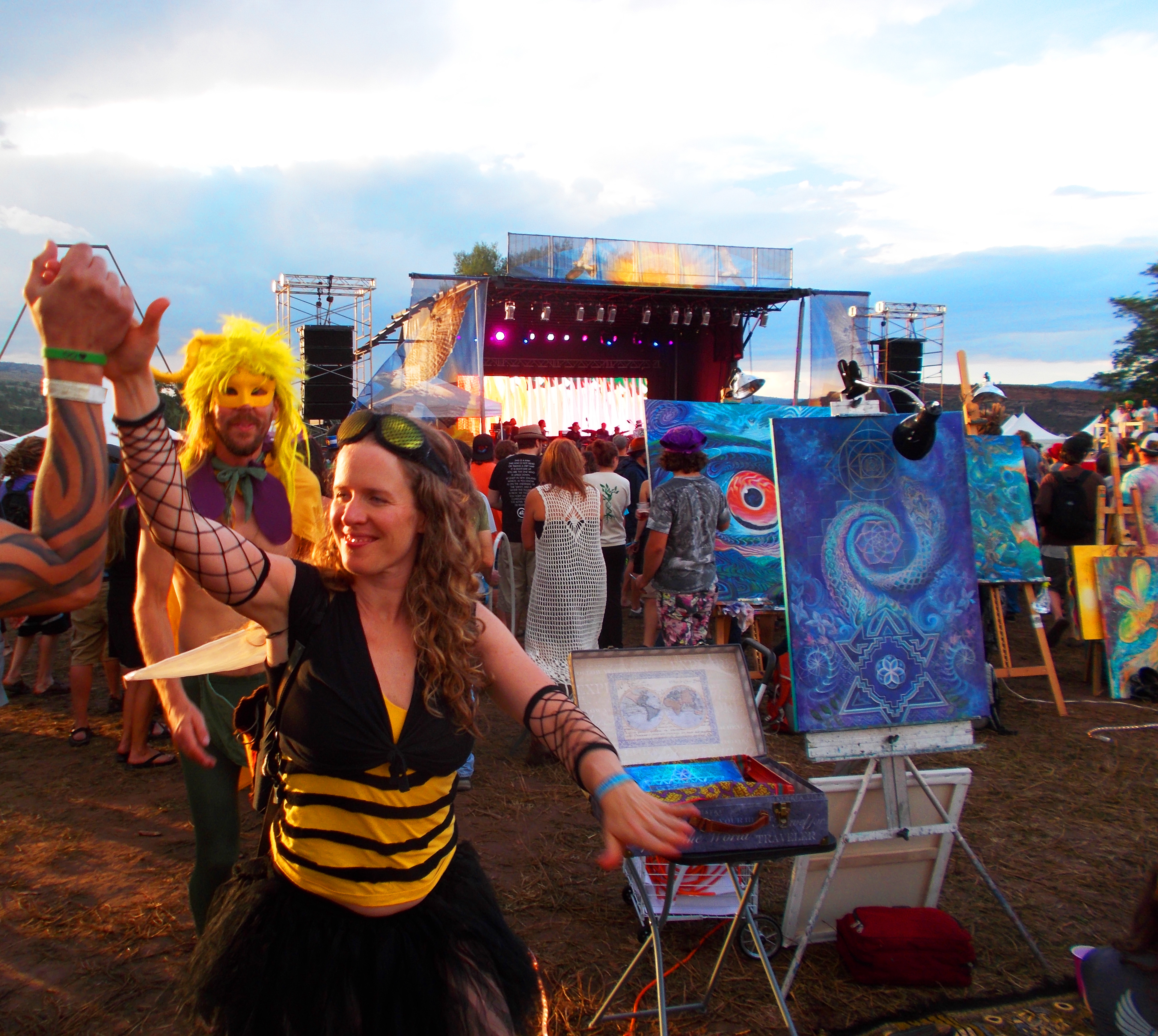 As I reviewed the coming days, I was blown away by the numerous immersive workshops, demonstrations, ceremonies, guided meditations, and yoga classes offered. Their Crown Chakra yoga tent was set up at the highest point of the festival on top of a large hill. The energy was majestic doing headstands more than a mile high, looking down at the glorious landscape as the warm sun kissed the skin. I highly recommend taking a step back and nourishing your body and mind while at a festival.

The next day after yoga, a visit to the press area and swim in the pool across the street was in order. While I was there, jam band Yamn appeared and did an acoustic set just a few feet from the pool, as we all jammed on floaties and soaked up the sunny mountain air. Then Everyone Orchestra set the pace for an outrageous evening, the main stage filled with a slew of musicians from various groups including legendary Steve Kimock, all being conducted by Matt Butler in his glorious and colorful conductor jacket. Each musician exuded passion and the ensemble was nothing short of amazing as they involved the audience’s participation with many of the songs. Making each person a contributor to the magic was in line with ARISE’s vision.

The Infamous Stringdusters put on an impressive bluegrass set. Steel guitar, banjo, fiddle, stand-up bass, and acoustic guitar comprise the Stringdusters, and trust me there is no dust on any of those strings after the boot-stompin’ boogie they put on. Random bursts of lightning off in the distance beyond the stage illuminated the sky purple, yet it never rained. You could feel the energy when funk masters Galactic played next featuring hip hop legends Chali 2na and Lyrics Born. It was a fun combination with the rap edge, trombone solos, and Galactic’s robust funky flow.

Quixotic mesmerized with their fusion of aerial artists, fire dancers, otherworldly costumes, exotic downtempo beats, and more. Each one of their shows is different, and you never really know what to expect other than a sensory experience. The Souls in Action stage hosted Ryan Viser, SunSquabi, and Mr. Bill. My favorite from that stage was Unlimited Aspect (duo comprised of Unlimited Gravity and Project Aspect) + Mile High Sound Movement Orchestra (a collective out of Denver with rotating musicians). The combination was cutting edge music, folks. I was blown away and spent the next hour conversing with the female fiddle player. It was unbelievable to learn it was her first time playing them. In fact, it was many of the musicians’ first time playing with each other, just another example of the gushing talent going on in those mountains.

The following day I wandered through the intriguing vendors offering artistic wares of many cultures and styles, as well as inspired elixirs and scrumptious eats. My personal food favorite was “Super Heady Tacos,” part of McDevitt Taco Supply in Boulder, made with local organic ingredients. I first met these guys at Sonic Bloom; they are jammin’ out and serving up delicious tacos at a number of festivals this year.

After smashing tacos, I enjoyed The Magic Beans. The Colorado natives are a funky jam band with hints of electronic. A fellow audience member had a large number of plastic balls like the ones that go in a ball pit. He handed them out to everyone in the crowd and on his signal, we all threw the balls up in the air. They bounced around for several moments and for some reason none of us could stop laughing as the Beans busted out Duran Duran’s “Hungry Like the Wolf.”

Peter Yarrow of Peter, Paul, & Mary was a star of the festival. Peter is an activist who has utilized his influence to give back, including forming organization Operation Respect to help educate children. He and his band along with Nahko and several others performed “This Little Light of Mine,” to which everyone sang along...it was a shining musical moment. He was then presented with the first ever Uplifting Music Award.

The atmosphere was perfectly set for Nahko and Medicine For The People to continue the joyous vibes. The collective has created a wonderful following, which they refer to as their Tribe. We howled at the moon and danced and let the performance nourish us. The group was inspired by the festival, and even had a press conference post-fest to discuss items such as the impact cross-pollination of people from different cultures can have.

Grateful Grass was the final set on the main stage, featuring Keller Williams, Bill Nershi of String Cheese Incident, former Cornmeal violinist Allie Kral, and more. They performed the music of the Grateful Dead with a twang, and it was wonderful way to end my ARISE music roster.

The venue, Sunrise Ranch, is an organic farm and ranch that creates programs for renewal, learning, and transformation. The owners and employees worked hand in hand with the promoters and producers of the festival. Honoring that place we called home for three days and treating it respectfully shows progress from some of the other music events in the country.

ARISE has already announced next year’s dates August 7-9, 2015, and you can guarantee that is where I will be. I can’t wait to go back. This revolutionary co-creative festival greatly contributes to a culture that is improving. Our generation, though weathered by technology, war, and excess, is on the cusp of something grand. A renaissance of increasingly artistic and conscious beings.