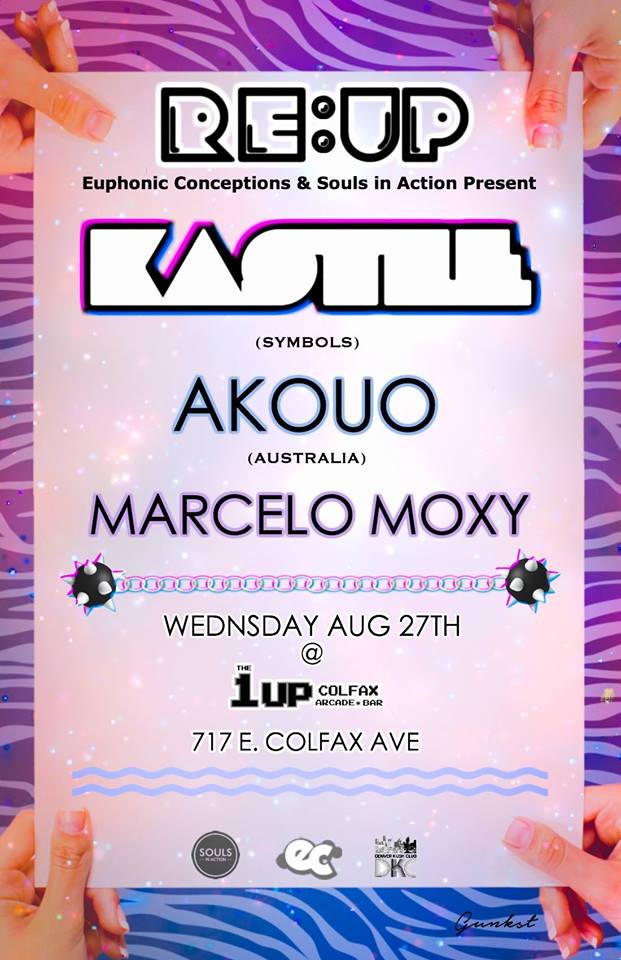 It’s typical for those unfamiliar with The 1up - Colfax to be surprised when they pass by the arcade-bar-meets-venue during the middle of the week. RE:UP Wednesdays, the weekly electronic music series put on by Euphonic Conceptions, is easily Denver’s best mid-week party. Costing just $5 (if tickets are purchased before 9 pm on the day of the show), it’s easy to see why lines frequently stretch down the block.

Since Euphonic Conceptions first brought VibeSquaD to The 1up - Colfax in February for the inaugural RE:UP Wednesdays, the promotion company has booked an eclectic array of musicians. From glitch hop gurus Andreilien and Love & Light to violin-wielding bass wizard Govinda to the smooth electro funk pioneers Exmag, RE:UP Wednesdays feature all subgenres of electronic music. The crowds are equally as diverse and seem to generally avoid obnoxious over intoxication. While some people are simply there to get drunk and play video games, most people are there for the quality music (and also to get drunk and play video games).

The 1up - Colfax first opened its doors in June 2012 after the success of its predecessor, The 1up - LoDo, which opened in March 2011. Initially, both locations began as arcade bars, but in April 2013, the Colfax location acquired the space next door formerly belonging to adult entertainment store Kitty’s East. After several months of renovations, The 1up - Colfax officially open its doors as a barcade/music venue in December.

It’s a common occurrence to see some of Colorado’s best musicians playing one of the arcade’s19 pinball machines or hanging out on the smoking patio shooting the breeze with their fans. You never know when you might get to meet Break Science’s Adam Deitch and Borahm Lee or see ex-STS9 bassist David Murphy exchange phone numbers with Michal Menert. When asked why he thought his venue was so inviting to Denver musicians, owner Jourdan Adler (favorite arcade game: Centipede) said, “We've worked hard to create an environment that is friendly to artists when they are performing or coming by to watch their friends perform. They feel welcome, which they always are.”

The awesome array of video games combined with great music and a cheap ticket makes for a consistently excellent experience. Even the only real downside to RE:UP Wednesdays (a lopsided staff to patron ratio which caused long wait times at the bar) has been corrected - Adler recently increased the number of Wednesday night bartenders from four to seven. So the next time you find yourself twiddling your thumbs at home on a Wednesday night, make your way down to The 1up - Colfax and come join the party.