Derek Vincent Smith blazed into the city of Los Angeles on last week with his heavy-hitting posse in tow, ready to invade The Wiltern on what was the second-to-last stop of the fall Analog Future tour. Opening support was none other than the heavy bass line duo of Harrison Mills and Clayton Knight, aka Odesza, who filled the room early and set a nice tone for Pretty Lights to take over. 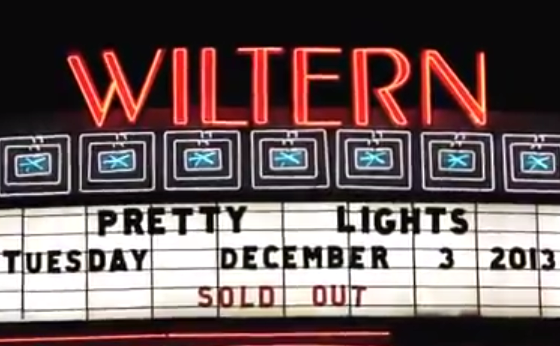 The sign in the foyer of the venue was no bullshit, and quite the understatement.  It read, “Please be aware that strobe lights may be used during this performance. “

The lights (maybe 20-30 of them) dropped, spun, sparkled, and strobed quickly.  The snippet of that Jay Z beat (you know the one) blasted. And the bass momentarily scratched at the throat of the anticipating crowd to get their full attention.  Then it was on.

This wasn’t the average 45-minute to hour set of someone pressing play, imitating, and playing everybody else’s Top 40 remixes. This was dedication. This was on point. This evening was artistic and was a refreshing take on this generation reaching new heights in music.  It was a blend of bass, jazz, funk, hip-hop, rock, soul, R&B, house, and more. For the next 3 hours, what unfolded was the product of true musicianship. It was the evolution of countless hours in the studio. It was a showcase of vision and talent.

It was a night for Derek Vincent Smith to treat his West Coast, LA-based fans with something special and that’s just what happened.

With a keyboardist tickling the ivories to his immediate left, the super funky horns section, both halves of Break Science to his immediate right, and occasionally picking up a bass himself – Pretty Lights dazzled and puffed super tough through a performance that would see a life of 3+ hours.  As he vibed back and forth behind his command center, Smith was clearly feeling the high energy of both the sold-out crowd and his endless supply of blunts.  Nobody was taking him from his zone.

With tracks like “Let’s Get Busy” and “Around The Block” turning the entire room into a frenzy, and old favorites from the depths of the Pretty Lights catalog causing the room to fill with a thick bud haze, it was one of the most refreshing Pretty Lights sets I’ve had the privilege of witnessing.  And to close it out with one of the most beautiful renditions of “Finally Moving” he’s played, it was icing on the cake.