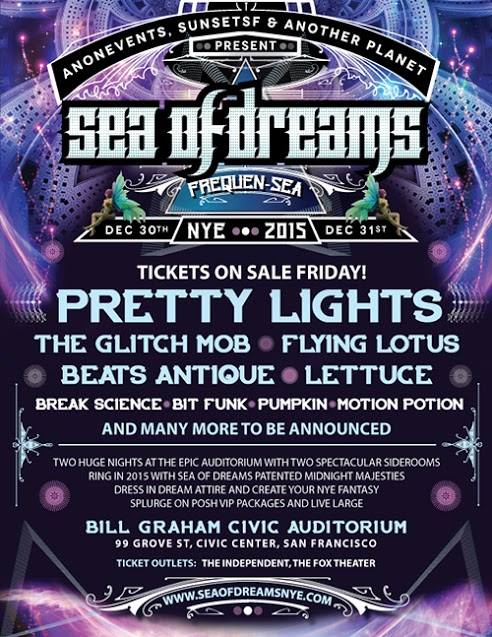 Mum was the word on the Pretty Lights front, relatively speaking, until this morning's announcement that the whole live band would be headlining Sea of Dreams in San Francisco, CA on December 30th and 31st for a New Year's Eve blowout featuring a star-studded lineup.

Joining Derek Vincent Smith and his all-star band are heavy-hitters The Glitch Mob and Flying Lotus, two west coast favorites. And as Smith's band is made up of Break Science and Lettuce alums, they've earned themselves a spot on the lineup, as well. Bay Area faves Beats Antique are also on hand, as well as Bit Funk, Pumpkin, and promoter/party legend Motion Potion. More artists are scheduled to be announced in the coming weeks.

Big-time Bay Area promoters Anonevents, Sunset SF, and Another Planet combine on Frequen-Sea which strays away from more mainstream EDM, instead focusing on powerful underground figures which their collective audiences have come to appreciate. The PL band hit the Bill Graham Auditorium and Civic Center in November of last year, and the news the outfit is coming back for NYE has fans on the edge of their seats.

Guests are encouraged to explore the auditorium and lavishly decorated side rooms dressed as dreamy fantasy world inhabitants. VIP options will allow fans to enjoy many perks as they ring in 2015.

Visit www.seaofdreamsnye.com for more information, and to get ticket and hotel package information.