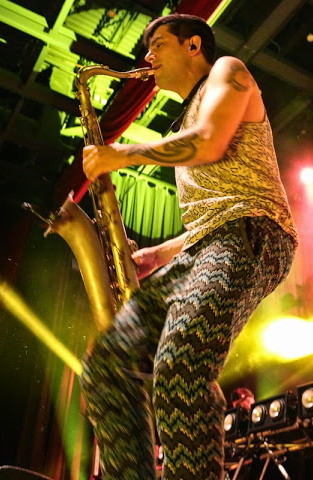 Swirling in a thick, soupy vat of funk and future beats, the newest Russ Liquid album, In Love, is synthporn for backpackers and headbangers, alike.

Currently supporting Lowtemp head honcho Gramatik on his European tour, the multi-instrumentalist who moves just as easily from trumpet to sax to flute to piano has blended frenetic, irreverent beats and loops with otherworldly effects to craft bewildering soundscapes that surround the listener in sexy R&B vignettes.

Tracks like "Freezer" undergird the Lowtemp obsession with the babymaking music of the 22nd century. Cooing horns bounce and bellow off cool-as-ice kits that sound like they're wearing fedoras and pulling on Parliaments.

Others like "Sweetest Taboo" connect this east coast pre-coitus aesthetic to the west coast, psychedelic world, from whence Russ comes. The album speaks to fans of Cashmere Cat as easily as it does fans of Phutureprimitive.

And guest spots from underground heroes Freddy Todd and Thriftworks cement Russ Liquid's cherry seat in this scene, as the dude who can do it all. This is what a star looks like on the rise.