Knoxville was lucky enough to celebrate 420 in (or without?) style this year—The Widdler and Levitation Jones threw it down, making the performance memorable for all in attendance. The bill also included REZ, Hyperbolic Headspace, Prophet, and Nematodes, who each contributed to the distinct vibe found in the Concourse that night.

The event was hosted by Post Future, a production company officially established by Ryan Newport around nine months ago. Over the past few years Newport has gained serious traction throwing events in the southeast. He also serves as manager to Levitation Jones and Hyperbolic Headspace, which he has found goes hand in hand with event production. His goal and vision for Post Future is to “push future ideas, sound and culture.”

“I moved to Knoxville a year and a half ago and slowly started establishing Post Future. I started sinking my roots in Atlanta, Knoxville, Nashville, through Birmingham and all throughout Florida and just getting involved in the scene,” Newport said before the 420 shenanigans got underway.

“It helps a lot that people like my music down here,” Jones added with a laugh. “We use that to our advantage … everyone always jokes but it’s true—there is no Levitation Jones without Newp and there is no Newp without Levitation Jones.”

Their relationship started back when Jones was slotted at Wakarusa’s Grassroots Stage. Newport reached out and actually offered Jones a ride, which according to Jones is a ride that hasn’t stopped ever since. As the two began to grow and gain contacts in the industry, they used each other to mutually benefit and boost their network. 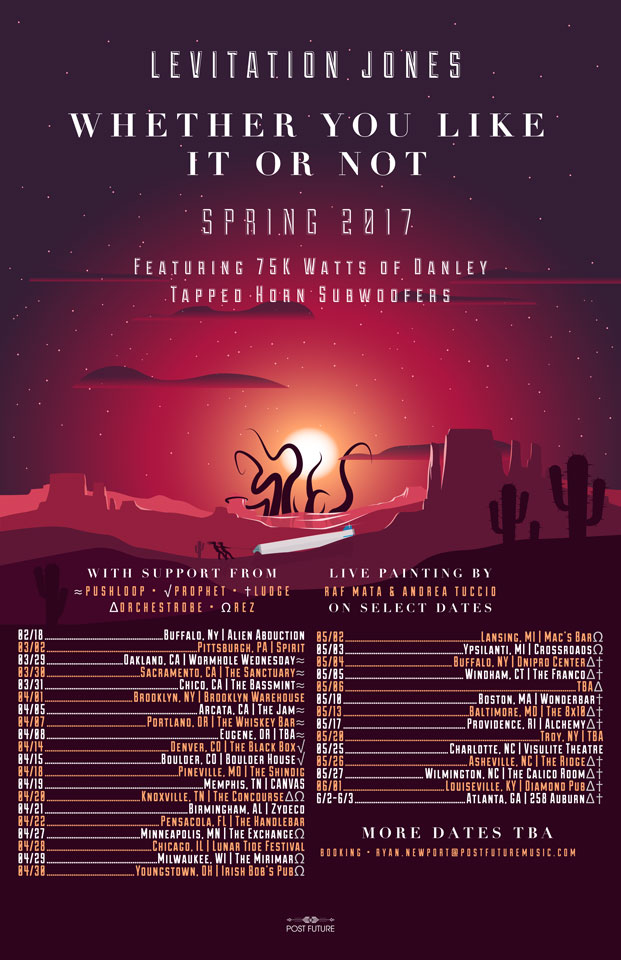 Fast forward to their 420 event where the Widdler and others made the Knoxville stop of Jones’ “Whether You Like It Or Not Tour” one for the books. The night ended with a Widdler, Jones and more b2b set that won’t be forgotten anytime soon. It was also the debut of Post Future’s new Danley Puregroove Soundsystem, which boasted an extra 75K watts of gnarly bass. The sound system will be joining Jones on the rest of his tour as well, so it’s something you don’t want to miss out on. Or maybe you do. They will definitely be getting down either way.

Newport went on to say that from the start they’ve been winging it as they go. “It’s like, I bet we can do what we want and that’s fine, we’ll get away with it. But now it’s starting to get to the point where people like what we do … and it’s extremely humbling,” he continued. “We’re not really ever looking to get to the top of the chart.”

Jones responded by saying “It’s too hard to portray your message if you have too big of an audience … It’s not about money or popularity, I literally just wanted to create something where we get to hang out with our friends as our jobs and do what we want to do for our jobs—and we’re doing it.”

Catch the “Whether You Like It Or Not Tour” coming to a city near you as the summer gets underway. There’s even two nights in Atlanta for those of you who really can’t get enough of this guy—a giant good luck goes to those of you strong-willed individuals.