What began as a night filled with promise—and briefly turned sour—bounced back to become a once-in-a-lifetime opportunity.

For the second time ever, Lotus brought their Talking Heads Deconstructed set to life. With support from Papadosio and Orchard Lounge, this trifecta of sonic forces delivered a night of breathtaking, soul-shaking entertainment that spanned multiple genres and musical eras.

The sourness spawned from arriving at the Red Rocks box office and seeing three seemingly endless lines snaking out of its windows. There was no discernible order; desperate attendees merged into the front of the herd, often with no consequence. After an excruciatingly long wait, I finally got my press pass and ran full speed to the lower gates —only to find another horde of people waiting to get in. I made it in just as Papadosio launched into “Cue,”already their third song of only six for the night. Thank goodness for the digital age, because I was able to re-live both Orchard Lounge’s set and theirs.

The sultry tones of Chicago-based duo Spencer & Bethany Lokken aka Orchard Lounge greased the wheels for an evening of stellar music. The only genre you can use to describe Orchard Lounge’s music is house, but such a simple word cannot possibly describe their eclectic soundscapes. Their DJ sets are equal parts groovy, tribal and psychedelic. Some tracks make you want to sit back and contemplate their rich textures while others practically lift you off your feet with their ebullient energy. You might think a pair of DJs would be a strange opening act for two jam bands, but given the electronic influence apparent in both Lotus and Papadosio’s music, Orchard Lounge made for a perfect warm up. Despite a set that barely broke the 30-minute mark, Spencer and Bethany managed to pack in a panache of musical style.

When Papadosio finally took the stage, you could feel the excitement surging through their veins. The Ohio-born quintet that now resides in Asheville, NC have quickly risen to the top of the jamtronica scene, and it was a treat getting to see the outpouring of love from their loyal followers radiate through the rocks. Just six months ago, Papadosio played a small show at Seattle’s The Crocodile that filled maybe half the venue. Fast forward to mid-September and Dosio was playing to an already jam-packed Red Rocks as an opener. 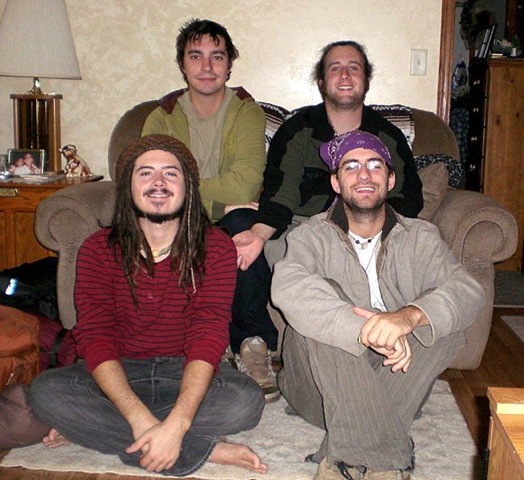 After a powerfully moving “The Bionic Man Lost His Way,”guitarist Anthony Thogmartin got on the mic and let everyone know that “this is the craziest moment of my life for sure.”On the day of the show, someone in the Papadosio Family Facebook group posted a photo of the band from several years ago. Seeing their young smiling faces served as a beautiful reminder of just how far they have come. Their music always seems to find a balance between harmonious spirituality and raw power, and their audiovisual showcase at Red Rocks was no exception. As they belted out “Cloud Found,”a myriad of images from the uplifting (sacred geometry, puppies, constellations) to the inspiring (political rallies, Guy Fawkes masks) splashed across the huge LED diamond hanging behind them. Dosio’s music has always carried a conscious message, a subtle undertone that suggests each one of us holds the key to a bright future for ourselves and the world.

A rousing “Cue”preceded a crisp, flavorful “New Love”(the song was recently featured as a part of their Night & Day live video series recorded in a cabin in Asheville). However, the whole set felt like a lead up to the next song: a “Find Your Cloud”that featured Lotus guitarist Mike Rempel. Hearing Rempel’s addition to what was already one of my favorite Papadosio songs was like finding an amazing deleted scene on a DVD of your favorite movie; the movie is still great without it but when you see that scene, the whole thing makes even more sense. It added a whole new chapter to the song. You’ll have to excuse my language, but it was fucking magical. Thogmartin also announced that Papadosio would be playing a special show on December 13 at The Fillmore Auditorium in Denver called Earth Night, which is a benefit for Conscious Alliance featuring Rising Appalachia and Eskmo. To cap it all off, Dosio finished with “Paradigm Shift,”a song both lively and melodic that set the tone for the weird, wonderful affair that was about to take place.

Up until this night, I was a pretty casual Lotus fan. I’d seen them for the first time at Electric Forest 2013 and had been pretty impressed by their performance. A few of their songs really grabbed me and a few really didn’t. But seeing them come out and absolutely nail the Talking Heads left me stunned and speechless. Lotus commissioned Gabriel Otto of Pan Astral to conjure up his best David Byrne, and it is an understatement to say that he delivered. Otto was Byrne that night. For a while, I wasn’t sure if David Byrne had slathered on some makeup, died his hair and joined Lotus on stage. His impersonation was so good that part of me still believes that Byrne was backstage singing and Otto was simply lip synching. Otto’s wobbly dance moves made it look like he was channeling the Talking Heads legendary frontman. He sloshed around the stage like a maniac bouncing between a cocaine-fueled drunken stupor and the edge of a k-hole. He simultaneously spun out of control and yet somehow still moved with robotic precision.

Lotus dialed right into the funky 80's pop that the Talking Heads so masterfully harnessed while adding their own modern accent. As soon as they kicked off with “Moonrocks,”the crowd absolutely lit up. When they seamlessly blended “I Zimbra” into “This Must Be The Place”(and also brought out Papadosio drummer Mike Healy to join them on percussion), the opening chords sent another shockwave of excitement through the audience. Rempel’s contorted facial expressions proved that he was really feeling it, and I swear he tossed in the main chords to “Umbilical Moonrise”towards the end of the song. The party kept rolling throughout the entire set as Otto seemed to drop even further into Byrne’s subconscious. The set capped off with an upbeat rendition of “Crosseyed and Painless” so packed with energy that the set break brought on a welcome rest.

SET I (Talking Heads Deconstructed): Moonrocks, Found A Job, I Zimbra> This Must Be The Place, Girlfriend Is Better> Pull Up The Roots, Warning Sign> Crosseyed & Painless

Many of us were hoping for another set of Talking Heads covers, but Lotus nonetheless put together a stellar set of their original music. From “Kodiak” to “Suitcases” to “Spiritualized,” every song popped with vigor. They strung together a mix of songs both old and new that demonstrated their diverse musical portfolio. Still, we had acquired a taste for the Talking Heads and wondered if there was any more Byrne in store.

After closing out their second set, Lotus started their encore with a hypnotic ballad called “Sunset of the Giant Dipper”from their new album “Gilded Age.”Just when we thought the show was over, Otto came back on stage and exploded into a spot on rendition of “Once In A Lifetime,” perhaps the Talking Heads most iconic song. I could not have imagined a more perfect way to end this spectacular evening. My hat is off to everyone involved from Orchard Lounge (who were recently added Michal Menert’s Big Band show with Exmag and Marcelo Moxy at the Fillmore on November 7), Papadosio (see y’all in December!), Lotus and especially Gabriel Otto. I’m still not sure if you were possessed by the spirit David Byrne but either way, that performance was damn near flawless.