This past summer, Ohio-born, North Carolina-based jamtronica quintet Papadosio cemented itself as staples of the American festival circuit. Stages at The Werk Out, Peach, Camp Bisco and F.A.R.M. Fest were flooded with the sounds of the band’s amalgam of electronica, folk, jam, and progressive rock, getting fans excited for the release of Extras in a Movie.

The wait is finally over, and this 16-track, full length will not disappoint core fans of the band. Beautiful orchestral soundscapes and cinematic compositions make up this release, with an ebb and flow of uptempo danceable tracks to laidback tunes that make you want to close your eyes and sway a little bit.

Opener “The Last Leaf” is a completely a cappella piece that will give you a bit of a surprise. You’re greeted with reverberating voices of the band, sounding like a beautiful barbershop quartet. This leads into “Out of Hiding,” which keeps many of the instruments at bay, aside from a solid bass groove from Rob McConnell, showing off Anthony Thogmartin’s unique upper register vocal chops. 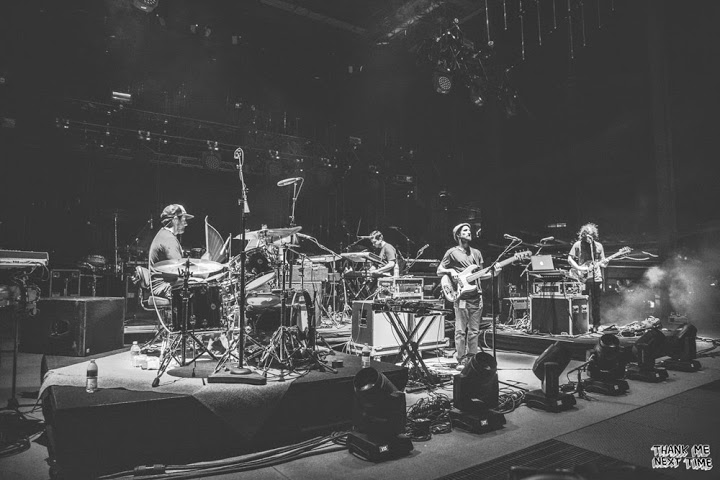 “Epiphany,” the second single off the album, gives way to a more indie rock and chillwave influence sound, with rising vocals complemented by breathy croons. “Bypass Default” is a nice focus on the bands electronic roots. The song has the synth sounds and structure of what you would hear in a progressive house/trance track, combined with staccato guitar work and a closing wall of sound breakdown that we’ve grown to know and love from the band.

Papadosio’s folky roots are minimally showcased on the release, but songs we do hear it on don’t disappoint. “2AM” has an upbeat sound with elements of swing mixed with acoustic rock. “Distant Days” combines folk sounds with a progressive rock feel, with a focus on electronic woodwind and vocal sampling over a thick bass groove.

One of the most intriguing cuts on the release is “Anima Mundi,” which fuses acoustic psychedelia with Egyptian vibes. Though the instrumental portions of the song are exceptional, Thogmartin’s voice is very difficult to understand throughout the tune. The vocal effects on his voice add to the remarkable sound, but the inaudible lyrics can take away from the overall nature of the track.

“Ritual” is the best of the completely instrumental tracks on the record, combining the cinematic essence of a John Williams score with the synthesizer stylings of Pink Floyd’s Dark Side of the Moon. The lengthiest song on album, it slowly progressives into a full on space rock tune, due mostly to Thogmartin’s guitar sounds. “Ritual” leads into “The Wrong Nostalgia,” which greatly contrasts with the song it follows. Its instrumental sounds are on the minimal side of progressive rock, but the lyrics take the forefront of the song, aimed at the mainstream musical standards of modern radio and money grabbing actions of industry bigwigs. While political lyrics aren’t much of forte of the band, this subject is a pretty good one to begin with. This is Dosio's "Have a Cigar."

Much of the rest of the album, besides the first single “Glimpse of Light” and the beautiful cinematic closing that is “Moon Entendre,” could have used some tightening. A 16-track release was a good venture for the band, but the album slows down a bit in its back half.

Overall, Extras in a Movie is a great showcase of the band’s sonic genre blurring, instrumental chemistry and vocal presentation. Since much of band’s beauty comes from their performance skills and improvisation, the Extras in a Movie Tour will be a great time experience to see the release truly come to life. The band celebrates the album's release with two shows at the Boulder Theater tonight and tomorrow in Boulder, CO, before heading out to Luna Light Festival to close things out on Sunday.

Buy Extras in a Movie on iTunes NOW!