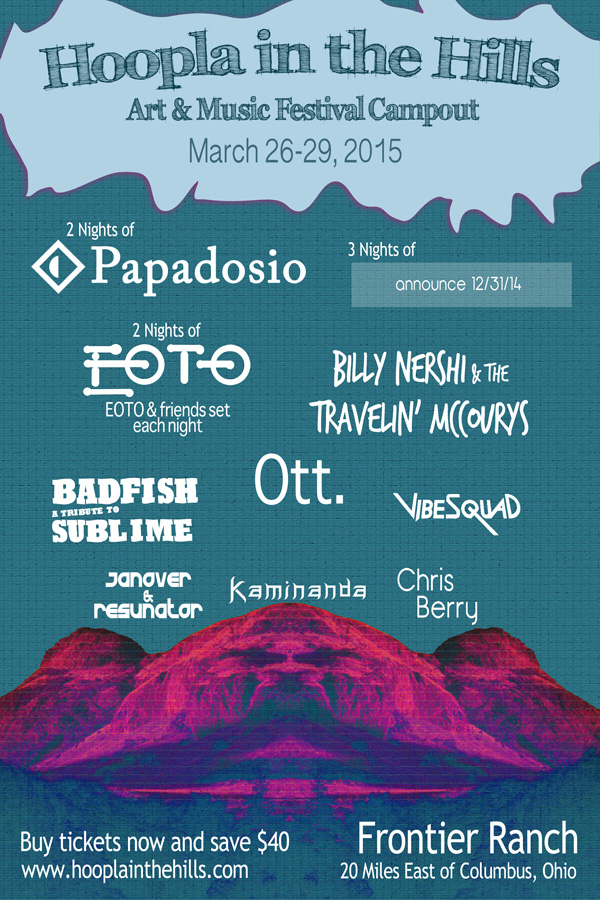 Fall tours have only just started to take off, but our thoughts are turning to festival season, already. The 9th annual Hoopla in the Hills today announced its headliners, and a lot of our favorite electronic acts have made the first round.

Papadosio will be headlining the jam-heavy festival for two-nights. The band from Ohio returns to Pataskala, just 20 minutes east of Columbus, shortly after headlining Resonance on the same grounds two weeks ago. The location at Frontier Ranch is a new one for the longstanding festival, which boasts a massive indoor tent for its main stage, which will keep early spring low temperatures at bay.

EOTO will also take the stage for two nights during the festival. The duo of Michael Travis and Jason Hann are also planning EOTO & Friends sets to correspond with each night's performance. Surprise guests will join the pair each night for unplanned improvisation that will stretch long into the night.

Twisted Records star Ott is also joining the bill; a fan favorite of the Papadosio and EOTO sets, the psychedelic dub producer is a highlight of a more electronic roster than we've seen in the past. Janover & reSunator, VibeSquaD, and Kaminanda round out the bill on the dance music side of things, boasting a killer underground cred that will make midwest fans smile.

The family-friendly camping festival will also have dozens of vendors on hand offering veggie options and craft beer. Children under 14 can get in for free with a parent or guardian, so there's no excuse not to bring the whole clan.

Fans who get a head start on advance tickets will save $40 off the gate price by snagging $100 early birds, which go on sale Friday, October 24th. More information can be found at hooplainthehills.com.