On September 5-9, the Rose City will welcome in the 12th annual MusicfestNW. As the date approaches, music lovers up and down the West Coast are gearing up for five days of great music in one of the most exciting cities the nation has to offer. As Portland has been home to MFNW since its inception, it has seen the event transform from a small, informal event that targeted Portland’s alternative scene into one that attracts diversified crowds from across the country. Today, MusicfestNW present itself as the third largest indoor music festival in the United States, offering a roster that is jam-packed with premier artists and a stress-free atmosphere appreciated by epresent.

MFNW is produced by Willamette Week, Portland’s chief alt-weekly newspaper. The WW team has done a great job in not only promoting the festival, but also serving as the driving force behind creating the culture that the event brings to Portland. In addition to its influence, MusicfestNW has also grown in length over the years. 2012’s festival will be the longest musical gathering to date—five consecutive evenings of musical performances will be spread throughout the collection of venues that Portland has to offer.

Fans are given several options when looking to purchase a wristband for the event. GA wristbands grant free entry to any MFNW club show and include a single ticket that guarantees admission to either Beirut, Girl Talk, or Silversun Pickups, who are three artists who will be performing in Portland’s Pioneer Courthouse Square. If an attendee is interested in seeing more than one performance at the Square, an all show wristband is available for $125 that guarantees entry into all club shows and includes tickets to all three headlining shows. Lastly, VIP wristbands can be purchased for $250, giving the attendee the privilege of attending any show, free of any additional tickets.

MusicfestNW is looking out for all different types of EDM fans with this year’s lineup. Passion Pit, A-Trak, Girl Talk, and Flying Lotus quickly jump out as huge names in the schedule. Other artists that are coming to prominence, such as Purity Ring and Strategy, are interspersed into the MFNW schedule. One can see that the MusicfestNW team made a point of including a diverse selection of electronic sounds for attendees to enjoy.

Baauer is a Brooklyn native that has shook up the scene with his prominent single, “Harlem Shake”. With influences from southern hip-hop and UK bass genres, Baauer has created a fusion that incorporates elements of crunk, trap, and bass music into its sound.

Nosaj Thing, also known as Jason Chung, is a hip-hop inspired musical modulator that hails from L.A. At age 13, it became Chung’s mission to make music using his father’s computer and a demo version of Ableton Live. Ten years later, Nosaj Thing has been featured in top-notch publications and has shared the stage with artists including Diplo, Architecture in Helsinki, and The Glitch Mob. Look out for this artist’s experimental electronic sound waves at Portland’s Wonder Ballroom.

The electronic names keep coming as one reads through the MFNW schedule. There is an abundance of talent waiting to be heard all across Portland’s venues, and fans need’nt wait much longer for the event to arrive. The MusicfestNW experience begins on Wednesday, September 5—save the date! 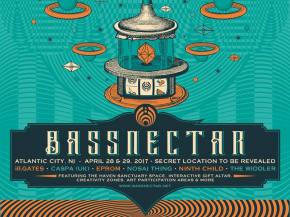