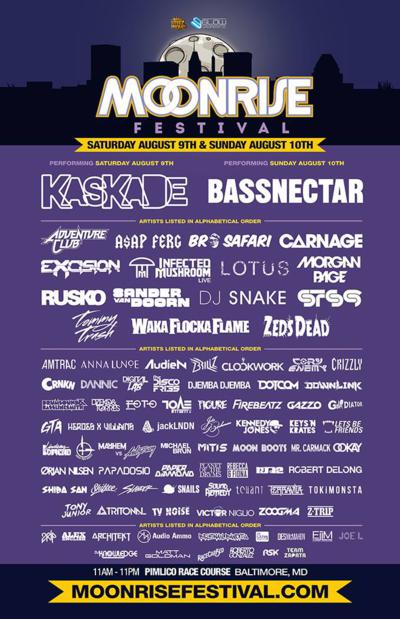 The stacked lineup has been revealed, and Kaskade and Bassnectar stand astride a huge cast of characters, which includes Lotus, STS9, ZEDS DEAD, Infected Mushroom, EOTO, Brillz, Papadosio, MitiS, and Zoogma, among others.

Uniting jam, mainstream EDM, and a few underground acts, the Phase 1 lineup of Moonrise is noticeably thick with talent. Expect subsequent phases to be even bigger for this unique event in the mid-Atlantic.

Last year, due to permitting issues, the equally robust lineup was forced to cancel, as the city and Steez Promo could not find common ground. This year, as ticketing was announced, the huge promoter posted its permits with the Pimlico Race Course as an assurance to fans that this festival would indeed take place, and they can rest easy.

The show will run from 11am-11pm each night, and after parties will almost certainly be announced. The dubstep, trap, electro, house, and jam superstars dotting the lineup make this paricular event one of the most diverse, and highly anticipated festivals of the year, following in the tradition of the now retired Starscape series.

Tickets for the event can be found at moonrisefestival.com.